Home»News»Hate, By The Numbers: Racist and Anti-Immigration Incidents Spiked After the Election
News

Hate, By The Numbers: Racist and Anti-Immigration Incidents Spiked After the Election 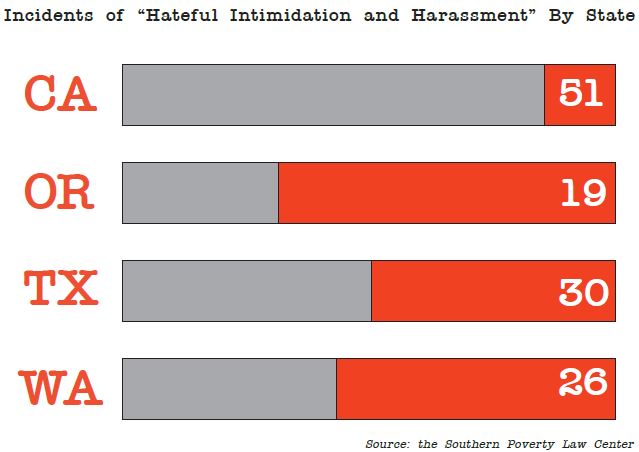 In 2008, the same year when Barack Obama was elected as the first African-American president, voters in Silverton, Oregon also marked a milestone: Residents in the small town, situated about 30 miles south by southeast from Portland and in the middle of farm land, elected the first transgender person to office in America, as their mayor.

But it seems as if that tolerance was in short supply this November. On this most recent Election Day, about 40 high school students gathered in the parking adjacent to Silverton High School. According to the Statesman Journal, the teenagers hoisted American flags and Trump campaign signs; a Confederate flag also was on display until the principal requested its removal. The students chanted to Hispanic students arriving at school, “pack your bags, you’re leaving tomorrow” and “tell your family good-bye,” overt references to Donald Trump’s proclamations about strident immigration and a stated priority of his administration to deport immigrants to Mexico. About 10 percent of the city is Hispanic.

The very next day—after Trump had secured enough points in the electoral college to earn him the presidency—a similar event was reported in North Bend, a small coastal town near Coos Bay. There, students berated an 11-year student from Colombia and an American citizen, chanting “go back to Mexico.” It was one of more than a dozen such incidents throughout Oregon during the week following the recent presidential elections.

Throughout the state, there have been reports about swastikas painted on walls at Reed College and Facebook posting at Lake Oswego High School suggesting that the seniors form a Ku Klux Klan club and “sacrifice them.”

According to the Southern Poverty Law Center, which asked people to submit reports, more than 400 incidents of “hateful intimidation and harassment” were reported during the week after the presidential election. The lead example that the Southern Poverty Law Center posted on their website is from Portland, which explained, “(a) Muslim woman was riding the Max to Beaverton in the early afternoon and a group of teenagers went to the corner of the car where she was sitting and got up in her face yelling at her that she was a terrorist, that our new president was going to deport her, that she can’t wear her hijab anymore. They got increasingly menacing, and my friend went over and made them get off the train. When they were leaving through the door they tried to spit on her.”

In total, there were 19 incidents reported throughout Oregon, a number less than the 51 reported in California and 30 in Texas. But, per capita, the Pacific Northwest was disproportionately high in its number of reported incidents; 26 incidents were reported in Washington, the same number recorded in the entire state of New York, which has nearly three times the population. The two most prevalent types of reports were anti-immigration and racist.

Moreover, over the past year and without any seeming connection to the presidential election, there were a disturbing number of racially-motivated incidents throughout the Pacific Northwest. Last January, for example, a biracial family in Salem received death threats in the form of notes signed with Ku Klux Klan images. And, in September, a 19-year old teenager was killed by a man and his wife who have overt connections to White Supremists. Russell Courtier and his girlfriend encountered the black man at a 7-11 just before midnight on August 10. The couple quickly began harassing the black teenager, smashed his head into the store’s plate glass window and, subsequently, chased him down in their jeep, purposely running over him.

Courtier is known to be connected to a white supremacist gang called the European Kindred, a group that began two decades ago at the Snake River Correctional Institution in Malheur County.  The Southern Poverty Law Center has quoted the founder saying, “the gang would soon spread to Oregon’s other prisons.”

Certainly, the incidents of hate crimes reported throughout the nation and in Oregon have been unnerving. But while the Southern Poverty Law Center report was highly troubling, there were some small indications of “hope,” to borrow a word from a previous campaign. Interestingly, LGBTQ slurs were a fraction of those incidents reported, a possible indicator of a major shift in national attitudes since the mid-2000s when 31 states, including Oregon, voted to constitutionally ban same-sex marriage—and perhaps one indication that some social attitudes have softened over the past decade.

Moreover, as the days moved further from Election Day, the number of reported incidents to the Southern Poverty Law Center steadily ebbed.

Hate, By The Numbers: Racist and Anti-Immigration Incidents Spiked After the Election