Reggae Rock to Lift Your Spirits: An Interview with Frankie Hernandez 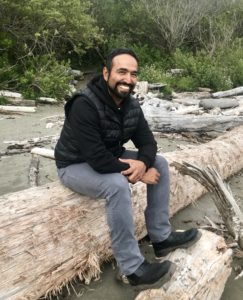 When Frankie Hernandez arrived on the Southern Oregon music scene sixteen years ago, he immediately immersed himself. In time he had played nearly every major venue in this area. Hernandez has had his songs featured on TV shows like Myth Busters and Hotel Hell, and he’s shared the stage with famous artists like Seal and Los Lobos. His music is described on his Facebook page: “Like if Sublime and Cake had a baby, that was raised by Santana.”

Just a couple months ago, Hernandez released his first worship/contemporary Christian album under the moniker “That Guy at My Church.” Catchy tracks like “Pleas and Thank Yous” with its hook for a chorus and “Blessed Life” with its beautiful trumpet solo that contributes to its reggae vibe help produce a heartfelt and inspirational album with emotional lyrics like “It’s okay to be broken. It’s a blessing to heal” (from the track “Let It Break You Open”). I was able to catch a few minutes with Frankie and ask him about his plans for the holidays, his gigs, and his music genre fusion amongst other things in a recent interview.

Rogue Valley Messenger: Did extra time during quarantine help change how you approach your music projects and how you used technology when collaborating?

Frankie Hernandez: This past season has definitely been one of renewed identity, grounding and innovation. The quarantine came at a time when I was figuring out how to integrate my spiritual music into something that was more than just for myself.

I was coming off of a period of grief from my divorce, life as a single dad and a bad experience from a rebound relationship. All my life I have always had my music career as my main income source, but I realized that it was also my suit of armor. My identity as a musician defined who I was and how I interacted with the world and my family. It didn’t always leave me available for the most intimate relationships that I could have as a husband, father or spiritual being.

The quarantine slowed my life down and put me in touch with the “WHY” of what I do. I never got into music so that I could pour my heart and talent out and watch people get drunk and try to have sex with each other. I have always wanted to be on the team that made the world a better place through love and integrity. I’m not a scientist, politician, philanthropist or theologian but I write, sing and play with all I got.

I immediately took to LIVE Streaming and decided that having social media content was the way that I could stay connected to people and share what was going on with me. That’s why I decided to do the gospel/worship album.

RVM: What changes to the Southern Oregon music scene would you like to see within the next year?

FH: Cooperation! I arrived in Southern Oregon in the fall of 2005. I almost immediately fell into a residency gig at The Osprey (where Jefferson Spirits is), became a member of The T Club, and started working at Guitar Center. From that vantage point I feel like I had my finger on the pulse of everything that was happening here. Not to mention, I played just about every open mic, jam night and party that I could find.

It seems like there were a lot more venues booking bands and a lot more people pouring into the local music scene. The musicians knew who each other were. There was also respect between the scenes. Reggae was strong. Bluegrass flourished. The punk scene was raging. And the cover bands were filling venues.

As more musicians and venue owners started coming here from other areas with different mentalities then the music scene started becoming more about the bottom line of a dollar and less about the spirit of generosity and creativity that was how we co-existed.

RVM: Your debut worship/Christian album came out earlier this year. Are you planning on releasing a series of studio, EP, and/or live albums in a relatively frequent sequence from here, or because so much goes into the production of an album, will the next one take quite a while to be ready for release?

FH: Very astute question! I really poured into the content creation for this record. I feel like I never really had the bandwidth to conceptualize a series of recordings around a recording before. Playing 100 – 150 shows a year as a band leader, solo act, guest musician, worship leader or open mic host in addition to being a dad and husband and sometimes maintaining other jobs makes it hard to be able to write and record – or even want to.

I’m really excited about the gospel/worship project because I’ve had the time to read, pray, meditate and develop spiritually based relationships. I’ve had time to spend with my family doing simple things and feel whole. I wrote about three times as many songs as I recorded. I got a chance to do a real crowd funding campaign that enabled me to fully flush out a vision and gave me the means to accomplish it.

I completed the album, produced a companion acoustic record (out very soon!!!), produced a music video and will be streaming out the live concert footage from the release party throughout the next couple of months.

RVM: Because the Holidays are known for a time of giving thanks and touching the lives of others, and I know you’ve been a part of Fire Relief and many other such events, what is your favorite memory when it comes to working with charities, volunteering in the community, doing benefit concerts and the like?

FH: I love doing community events! It has always been a part of my vision and reason for playing music. I think that the Puerto Rico Hurricane Benefit and the benefit for Mark DeGroft and his family – both at The Ashland Armory were my favorite. Both for the same reason: the spirit of generosity and cooperation. I love being surrounded by the people that I love, doing what we love to do for an appreciative world that needs us.

RVM: What do you have coming up for the Holidays, (professionally and/or personally)?

FH: We have a show at Roxy Ann Winery on December 17th that I’m really excited about! Through this period the full band shows have been sparse. Mostly I’ve played a lot of shows as a solo or duo. Other than that, I’m excited to release my band merch online. I’ve never sold hats or t-shirts and rarely keep up with keeping CD’s stocked up. It didn’t help that my duplicator, local, burned down in the fires last year with all of my masters.

And personally, I’m looking forward to the holidays with my family and church. I lead worship at my church and also play bass on the team. Bass is fun!

RVM: You’ve been at Smoked Salmon Fests, Cider Parties, church services, Gratitude shows, and Pirate Festivals among many other kinds of events in our area. In these times of uncertainty where one wonders what will continue and what won’t, what is one of the kinds of gigs that you’re most hoping to be a part of or looking forward to the most in 2022 and why?

FH: I want to play more family shows! I love the way that we like to party with our families here in Southern Oregon. That’s why I love wineries, benefits, small festivals, restaurants, city park concerts and anything with an outdoor stage. When children are around it sends a signal for people to behave and be stewards in the community and not just crazies.

I would also like to be a part of more spiritual community events that are Christian inclusive. It’s on my heart to get more people out of their caves and into service. Concerts that have a message of hope and service to our community.

RVM: You’ve got quite a mix of genres that you work with and you’re able to fuse them together very nicely. Are you going to do a purely Spanish language, or a purely “one genre” album in the future, or do you see yourself continuing to have the “mix of flavors” that you’ve become known for?

FH: I think that I will always swing wide when it comes to a genre. It’s probably to the detriment of my marketing. That’s the question I dread most: “What kind of music do you play?”. I would rather do what makes me and my guys happy and serves the greatest variety of people than pour myself into a mold that may or may not sell better.

Probably before my mom passes I will release a Spanish album, even if it’s just for her. It’s not something that I like to think about, but this season has put us in touch with the impermanence of life in some very sobering ways.

Reggae Rock to Lift Your Spirits: An Interview with Frankie Hernandez