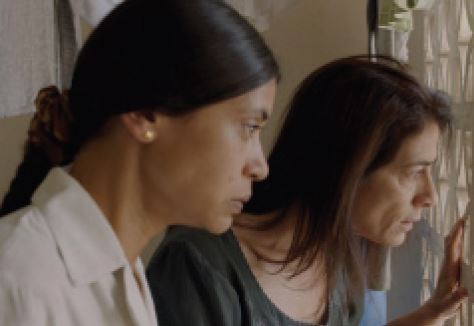 In war torn Syria, one mother fights to stay in her home, another aims to flee. Both become entangled with one another’s struggles. From the onset, after a sniper’s bullet rips down the hopes of young mother and wife, Halima, played by Diamand Abou Abboud, the story races through several tense hours in a small city apartment filled with nine people living and surviving in the midst of battle.

Oum Yazan, played by Hiam Abass (The Visitor, Miral) and mother of three of the children in the apartment, must balance the daily terrors and trials of war from within her demolished neighborhood, such as rounding up water and herding everyone safely to the kitchen during bombing, with the emotions that are accumulating from carrying a devastating secret about Halima’s husband to trying to maintain a semblance of family. “Now, some more dusting,” she orders her house servant, “then lunch.” It’s a rote ritual, cleaning after a wave of explosions. At one point, when she pulls the sheet off the elegant dining room table and caresses the fine wood, the depth of Oum Yazan’s attachment to home and family sinks in, yet at another turn she doesn’t hesitate to turn it into a hospital bed.

Inside, communication is taut, whether they’re strung out on emotion, or intermittent electricity and internet cut everyone off from the latest news. Between the sounds of sirens and bomb blasts there is life—one teenage daughter’s furtive love affair with a boy sheltered there, a grandfather’s silent and pious reverie of bygone days, the quiet daughter’s explosion of pain. War is portrayed not through the scope of espionage or soldiering, but like something out of the corner of your eye, an aspect we try not to imagine.

Philippe Van Leeuw, writer and director of the film, attempts to convey what it’s like being stuck inside the confines of daily wall-to-wall co-existence with one another as the ravages of war, from bombing to rape, happen just outside the door.

The cinematography and editing jets viewers around, keeping the pulse rate above normal, then at times lulls to near minute-long single takes while we follow a character through the halls and room to room doing a simple errand. If there’s a pause, grab that tissue because it means there’s going to be a release of tension, then it’s on to survival again.

Though the plot is simplistic, the quick pace, acting and emotional tensions is riveting.