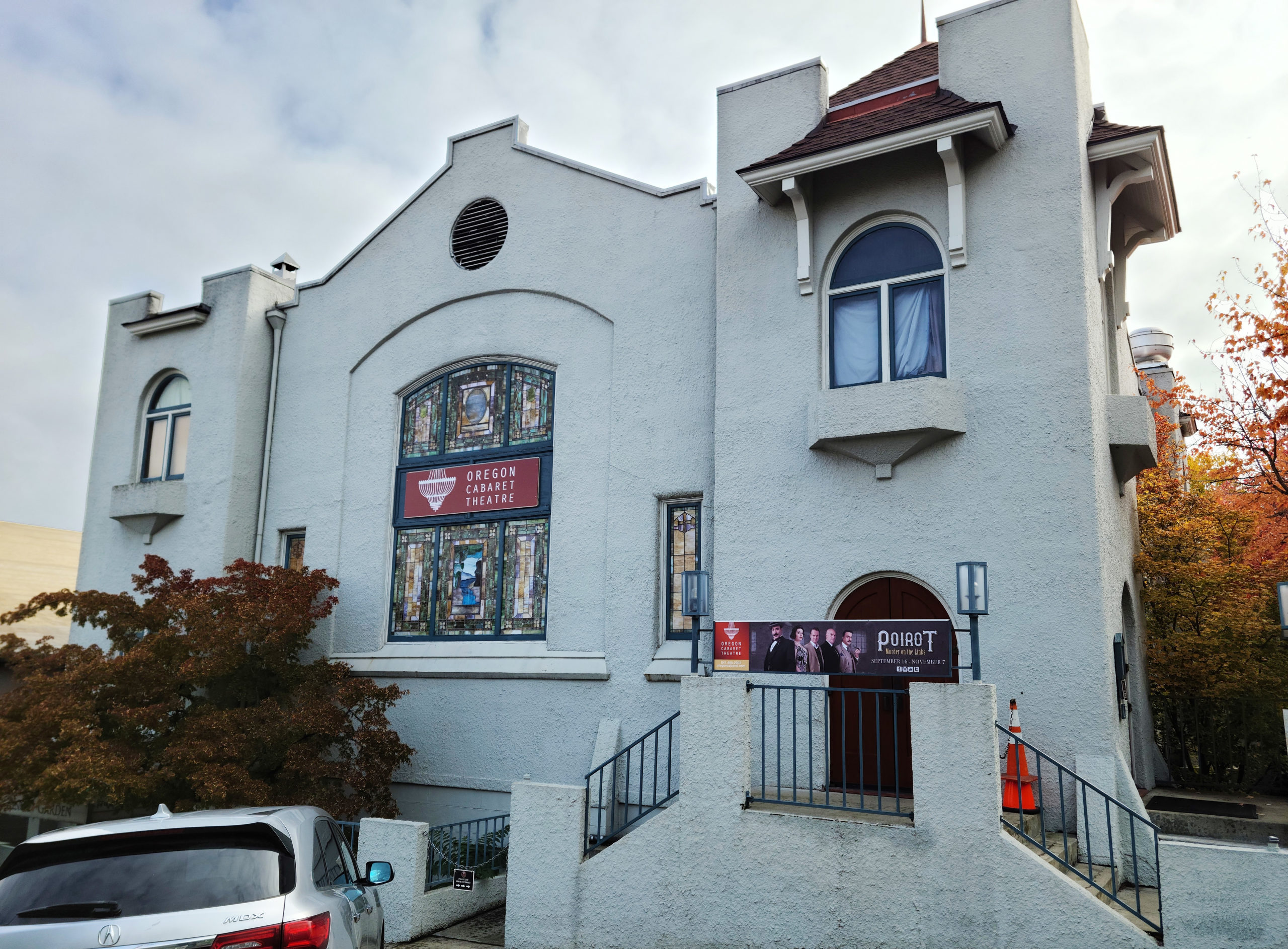 The Oregon Cabaret Theatre has announced its 37th season, including an expansion to a sixth show in 2022, White Christmas, to be performed at the Thomas Theatre at the Oregon Shakespeare Festival.

The first show of the Cabaret’s 2022 season, Moon Over Buffalo, is a stage farce by comic mastermind Ken Ludwig, author of theatrical hits Lend Me a Tenor, Leading Ladies, and Baskerville. In the show, George and Charlotte Hay, fading stars of the 1950s, are playing Private Lives and Cyrano De Bergerac in rep in Buffalo, New York with five actors. On the brink of a disastrous split-up caused by George’s dalliance with a young ingénue, they receive word that they might just have one last shot at stardom: Frank Capra is coming to town to see their matinee, and if he likes what he sees, he might cast them in his movie remake of The Scarlet Pimpernel. Unfortunately, for George and Charlotte, everything that could go wrong does go wrong, abetted by a visit from their daughter’s clueless fiancé and uncertainty about which play they’re actually performing. Moon Over Buffalo opens on February 10th and plays through April 10th, 2022.

The Cabaret’s spring show will be the 2008 Tony award winner for Best Musical, In the Heights. Before Hamilton, Broadway wunderkind Lin Manuel Miranda created this musical that takes place in a vibrant community in New York’s Washington Heights neighborhood – a place where the coffee from the corner bodega is light and sweet, the windows are always open and the breeze carries the rhythm of three generations of music. It takes place in a community on the brink of change, and its lead characters grapple with what they will take with them and what they’ll leave behind. In the Heights will play from April 21st through June 19th.

Playing from June 30th through September 4th, 2022, the Cabaret is bringing a musical that it originally promised audiences in 2020 – The Full Monty. While spying on their wives at a “Girls’ Night Out,” a group of unemployed steelworkers from Buffalo see how much the women enjoy watching male strippers. Jealous, out of work, and feeling emasculated, the men come up with a bold and unclothed way to make some quick cash – a strip show of their own. Based on the hit film of the same name, The Full Monty, was nominated for ten Tony Award nominees when it arrived on Broadway in 2002.

The fourth show of the season will be the world premiere adaptation, Sherlock Holmes and the Final Adventure. Sherlock Holmes’ skills are put to the test when he goes head-to-head with his intellectual equal, criminal mastermind Professor Moriarty. After repeated attempts on his life, Holmes is rejoined by his recently married friend Dr. Watson and the two attempt to thwart the Professor’s plans on a continent-spanning theatrical adventure that takes the audience from the safety of Holmes’ flat at 221B Baker Street to the heights of Reichenbach Falls in Switzerland. Sherlock Holmes and the Final Adventure will run from September 15th to November 6th, 2022.

The holiday show that will be performed in the Cabaret will be A Christmas Carol, running from November 17th to December 31st, 2022. Charles Dickens’ famous holiday ghost story is a haunting tale of that fateful Christmas Eve when miserly curmudgeon Ebenezer Scrooge is visited by his old business partner Jacob Marley. Scrooge is told to expect three spirits to haunt him – spirits of Christmas past, present, and future – intended to set Ebenezer on the unlikely path to redemption.

In addition to the five shows slated for production at the Cabaret, the company is producing a sixth show, White Christmas, to be performed at the Thomas Theatre at the Oregon Shakespeare festival from December 1st, 2022 to January 1st, 2023. Veterans Bob Wallace and Phil Davis have a successful song-and-dance act after World War II. With romance in mind, the two follow a duo of beautiful singing sisters en route to their Christmas show at a Vermont lodge, which just happens to be owned by Bob and Phil’s former Army commander, who is in desperate need of help with his struggling lodge. The Irving Berlin score features well known standards including Blue Skies, I Love A Piano, How Deep Is the Ocean and the perennial favorite, White Christmas. “Both the Cabaret and OSF are excited about making Ashland a destination during the holiday season,” says managing director Rick Robinson. “Our little town, lit up for the season is magical at that time of year, and now with three professional shows playing at the same time here during the holidays, people can come to town and get their fill of belly laughs with It’s Christmas, Carol at OSF, the delightful music of White Christmas produced by the Cabaret in the Thomas theatre of OSF, and the classic redemption story of Charles Dickens’ A Christmas Carol at the Cabaret – all in one weekend. It’s our combined hope that more theatre will mean more tourists – and more people in Ashland’s shops and restaurants.”

“Our theme for our 2022 season is dreaming big,” says artistic director Valerie Rachelle. “The realities of building back post-COVID would suggest we stick to smaller stories and smaller casts, but that’s not really who we are. We want to do extraordinary things next year – things you wouldn’t think possible.”

Show Pricing and Other Details

The Cabaret continues to offer a fine dining experience to go with your live theatre, featuring a full menu of starters, dinners, brunches, beer, wine, beverages, and desserts. As of 2020, the Oregon Cabaret has its full liquor license, so cocktails are also available to enjoy before or during the show. Reservations are required for dinner or brunch. Food and beverages are not included in the ticket price. No reservations necessary for starters, desserts, or beverages.

The Cabaret also offers a 15% ticket discount for groups of 12 or more as well as discounted group dining packages – this rate is not available on Saturday or Sunday, and is subject to availability and current party size restrictions mandated by the state.