Creative Art Flows Through Us All: Ashland Art Gallery Aims to Bring Community Together 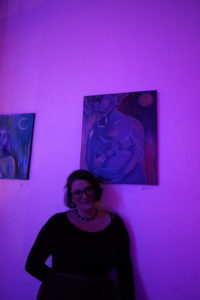 Life. Love. Pain. Healing. Music. Dance. Art. The Human Arts Collective strives to take all these elements to form what its founders believe is most important: Community.

The art gallery, founded by Deva Temple and Christal Sharpe, celebrated its grand opening Saturday, Dec. 18 in Ashland upstairs at 17 N. Main St. with music, dance and wine after an opening invocation by GodMa Rising and a Temple Dance Troupe led by Stara Being.

“My philosophy is we’re often our own worst critic so I promote movement and allow creative art to flow through us,” Temple said during the grand opening.

The Human Arts Collective formed to represent local emergent and diverse artists. The gallery plans to focus on therapy, teaching and the spirituality of art.

“We’ll be hosting a lot of events around creativity,” Temple said. “Creativity will get us out of the messes we’re in.”

She added that the goal of the gallery is to serve the local population with an alternative to other alcohol-heavy events by offering family-friendly classes and events meant for all ages.

And all ages seemed to be in attendance during the opening, from Temple’s mother all the way to a small child rocking out to the sounds of DJ Mystral.

Sharpe said that while the two of them were envisioning what they wanted the gallery to be, they thought of “a community hub to share hearts and create together.”

“We want to bring people in to learn together, to have a place to share and to create. It meets all of my needs as an artist.” Sharpe said. “We’re inviting creatives to utilize the space. We’ll be having a lot more events and classes for all ages.”

On display at the gallery was Temple’s jewelry along with the works of Sharpe, Jessica Lee Findleton, Zoriya Blolock, Daniel D. Barber, Julius Manning and the only non-local artist, Vera Long who plans to move from Ojai, California, to Ashland soon.

During the opening, artists shared about their favorite pieces and why they decided to join the collective.

“I know Crystal [Sharpe] and Deva [Temple] and wanted to show my art in a fresh place,” Lee Findleton said. “I also offer classes in visual poetry, intuitive art and crafting your creative muse.”

She described herself as a self-taught artist who has been showing her work for about six years now. “I’ve been making art my whole life,” she added.

Her paintings in mixed media are inspired by nature and her favorite right now, “Light Paths” is her newest.

“It has a lot of texture and reminds me of sunsets and rivers,” Lee Findleton said.

While helping to found the gallery, Sharpe also decided to show her work publicly for the first time.

“I’ve always created to feel and process my emotions,” she said, describing her process as one that can take anywhere from days to sometimes months to finish one piece.

“I’ll do a big, messy painting and then step back and stare at it until I see a form in the mess like with a magic eye,” she said.

“There was no pre-planning and this form just came to me,” Sharpe said. “This one happened so quickly.”

The painting features a woman cradling a child in her arms. The woman in the painting has tattoos up and down her arms and Sharpe said the true meaning of the painting did not come to her until about a year after it was finished.

“I had a mentally-ill mother and she didn’t meet my needs,” she said. “I gave the woman all these tattoos to represent her wounds and the wounds she passed on to me.”

She said the painting is titled “Ma Moon” because the woman represents the deeply nurturing mother we all wish we had but also “Mother Wound” because it’s the mother Sharpe never had.

“I think it’s something people with parent wounds will relate to,” she added.

Although the gallery just opened, it’s jumping into the community with both feet, so to speak. The gallery’s next event is Friday, Dec. 31 from 7:30 p.m. to 1 a.m. New Year’s Day. The event will be a creative visioning ceremony featuring music by DJ Merlin.

After dancing together, Temple said the plan is to roll out a 14-foot canvas for everyone there to paint, draw or collage their visions for the coming year onto like a community vision board. The canvas will then hang in the gallery for at least the month of January.

For this event, attendance will be limited so $20 tickets should be purchased in advance at human-arts-collective.ticketleap.com. Any remaining tickets will be available at the door for purchase.

Creative Art Flows Through Us All: Ashland Art Gallery Aims to Bring Community Together