You Can Keep the Pudding: SOU Athletics Adds Women’s Wrestling to Their Repertoire

When many people think of wrestling, images of red-faced ranting, flying chairs and other lowest-common-denominator theatrics come to mind, like a Trump press conference with spandex. Yet the “strictly for entertainment” televised junk food bears no relation to the sport with a history stretching back to Homer’s The Iliad. Wrestling’s place in the Olympics (classical since 708 BCE, modern since 1896) was put into jeopardy after the most recent games in London, due to the sway of corporate interests in sponsorships and viewing audiences the sport lacks. Likewise, collegiate programs at Portland State and University of Oregon have been eliminated—well, men’s wrestling, to be precise. 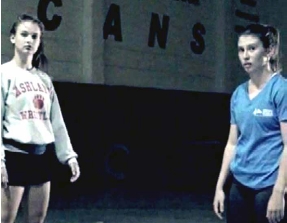 “Women’s wrestling truly is the future of the sport,” PSU four-time All-American Tony Champion said. “People still back in the Stone Age think that it’s not but…every program I have seen open in the last couple of years has been a combination of men’s and women’s wrestling.”

This combo is coming to Southern Oregon University, which becomes the fourth college in the state to add a women’s program this fall. Champion, the new coach, moves from coaching the varsity wrestling team at Ashland High School—one which also included boys and girls.

“I just happened to be in the right place at the right time,” he said. “Of the five girls that came out [of Ashland], four were state placers and one was the state champion our first year.”

One of those athletes, Sydney Norvell, is joining the new Raiders team. She suggests the “freestyle” form of wrestling practiced specifically by women makes for quicker, more exciting matches that engage audiences.

“You can throw over the head, you can lock your hands when somebody’s on the ground,” she said. “It’s a little more dangerous.”

The thrill of the fight is definitely what attracts teammate Kalyn Schwartz to the ring; a Marine Corps veteran and co-owner of Rogue Combat Academy, she was undefeated with six victories as a mixed martial artist when she decided to complete the higher education she started at Rogue Community College.

“I started doing combat sports and the person I am today is completely different, I walk around with confidence and hope for my future,” Schwartz said. “It’s important to me that whatever I get to do with my life, I get to show other women that you don’t have to just find a boyfriend, have a kid and put yourself on a backburner, it’s ok to be about yourself.”

The team will be under the spotlight in more ways than one their inaugural year: Starting this month, former Ashland High wrestler Sam Gostnell is returning from a budding filmmaking career in Los Angeles to produce a documentary Everything All At Once, about the women’s wrestling program.

Their first-ever SOU home meet will be on Nov. 4 against Menlo College, with alternating matches between the men’s and women’s teams.

Disclosure: The author’s day job is at RVTV, a semi-autonomous community television network sponsored by SOU.

You Can Keep the Pudding: SOU Athletics Adds Women’s Wrestling to Their Repertoire