Home»Culture»World-Famous, Feet Firmly on the Ground: Momix Brings Its Interpretations of the Dessert to the Dance Floor
Culture

World-Famous, Feet Firmly on the Ground: Momix Brings Its Interpretations of the Dessert to the Dance Floor 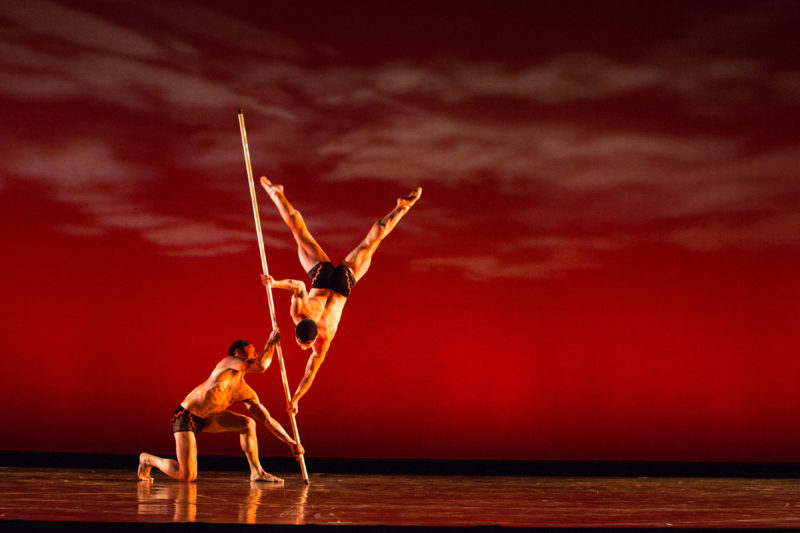 Momix is perhaps one of the most populist contemporary dance companies in the world; that is, they have already been to your living room and have brought the funky acrobatics and fluid contortions usually reserved for SoHo arthouses to mainstream America through a Hanes underwear ad with dancers rolling on yoga balls and appearances in Target ads with dancers wearing the trademark vibrant red and flirting between moves that nod to traditional ballroom and then morph into imaginative postmodern human sculptures.

And, Wednesday November 1, Momix brings contemporary dance to southern Oregon, at the Craterian Theater in Medford. (Editor’s shout out: The Messenger is the media sponsor for this event and, oh right, our members have a chance to win free tickets. Just another nudge to become a member today!)

Yet, in spite of the international acclaim for Momix, there is something that remains down-to-earth about the company. Perhaps it is the small town roots of its founder (who, in spite of the Messenger being a media sponsor for the event didn’t respond to our interview request; ahem). Moses Pendleton grew up on a Vermont dairy farm, not the most likely spring board for a world-famous contemporary dance choreographer. In the late 60s/early 70s, he met his future collaborators at nearby Dartmouth College, and tellingly even the names of their dance companies tie back to cows. Much like Ben & Jerry’s trademark black-and-white, two-dimensional Holsteins, the names for Pendleton’s dance companies has been bovine inspired. (Is that called bovinity?) At Dartmouth, he teamed with a classmate to form Pilobolus in 1971, a company that went on to global fame, with appearances at the Academy Awards and is named for a fungus that grows on cow dung with extraordinary strength and speed (like their dancers?). Likewise, in 1980, Pendleton performed a solo dance number at the Lake Placid Winter Olympics, just a hop and skip over the Adirondack Mountains from where he grew up. He called the number “Momix,” after a milk supplement fed to calves. A year later, Pendleton formed his new company and brought the name with him. 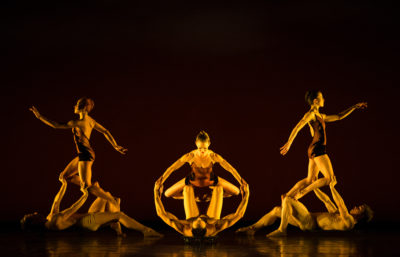 Moreover, Momix’s sensibility remains rooted to the natural world. Much like pioneer Merce Cunningham derived some of his movements from animals, Pendleton finds inspiration from the natural world; specifically, in Opus Cactus, the performance currently on tour, taking its inspiration from the American southwest dessert with dancers bathed in gold that fan open like a plant awakening to the morning sun and other dancers that toss and flit their limbs like a spastic beetle on the hot sand. Although the movements avoid narratives, they also keep the esoteric and exotic within comfortable reach.

Even the tour schedule seems dedicated to small town appeal. For example, the current nine-city west coast city sidesteps the obvious stops in Portland and San Francisco for less metropolitan towns, with stops in Eugene and Medford in Oregon and Davis, Modesto and Long Beach in California. (One notable exception is Las Vegas, but eight out of nine stops in smaller venues is commendable.)

World-Famous, Feet Firmly on the Ground: Momix Brings Its Interpretations of the Dessert to the Dance Floor