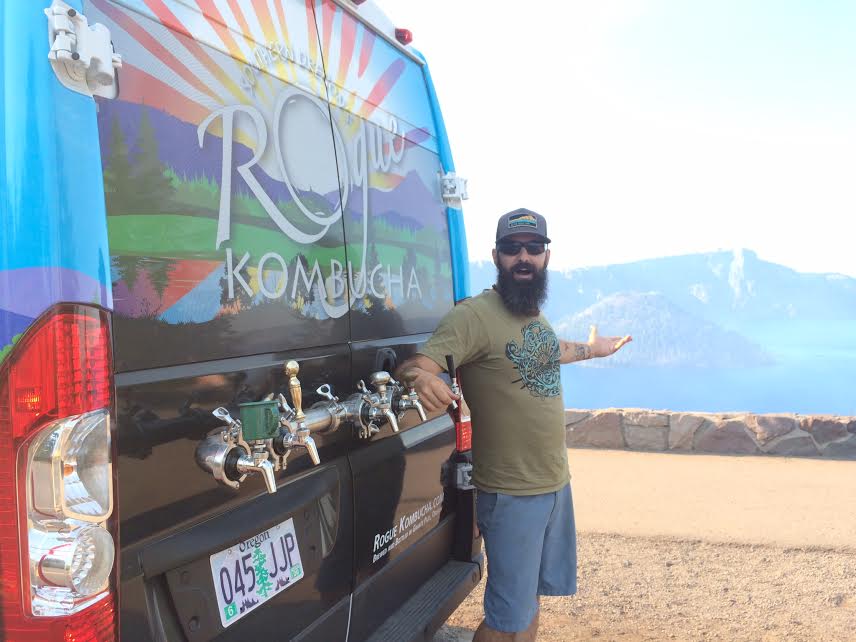 They are not doing things the easy way at Rogue Kombucha in Grants Pass, which, for the kombucha drinking public of the Rogue Valley, is fortunate.

“We create and craft all of our flavors from scratch,” says Chris Leach, Rogue Kombucha’s owner, as he cleans up after a morning’s production in the unheated, former RV barn he converted into his kombuchery. As evidence of making kombucha the hard way, Leach drives marionberries up to Genesis Organic Juices in Eugene to have them cold-pressed for Rogue’s Blackberry flavor and he is pursuing organic certification from Oregon Tilth, one of the highest organic standards in the US. As if that’s not enough, Leach and his crew, Amy Besler and older brother Bob, hand-label and hand-cap every bottle.

Making kombucha is challenging enough itself. Fermenting brewed tea—in Rogue’s case, an organic black and green tea blend—requires a mysterious creature known as a “SCOBY,” a symbiotic culture of bacteria and yeast, cane sugar, and seven to ten days of careful monitoring. Clarification, carbonation, and flavoring follow. Leach has spent 10 years perfecting the craft. “I was determined to figure it out,” he smiles. “I started with a lot of pickle jars in my pantry.”

A taste of Rogue’s flavors—Turmeric, June Bug, Balance, Blackberry, or In the Raw—reflects the ingredients’ quality and the artisanal methods. Though emphasis on kombucha’s health benefits often overwhelms drinking it for pleasure, Rogue Kombucha compromises on neither aspect. The herb and fruit combinations are intentional—immune boosting from June Bug or anti-inflammatory from Turmeric, for example—and the taste vibrant.

Leach readily shares credit for Rogue Kombucha’s steady growth. “If it weren’t for our community, we would not be able to do what we are doing.” Neighbors Pennington Farms and Pacific Botanicals grow, respectively, the organic marionberries and the organic herbs featured in Rogue’s flavors. Local stores–Takubeh in Williams, and Cartwrights Market and The Haul in Grants Pass–carry Rogue Kombucha on tap.

Joining the Rogue Kombucha community, meanwhile, is easy—fill a growler, find a bottle at 40 different stores from Ashland to Eugene, or plan to visit the tasting room opening this summer in Grants Pass.