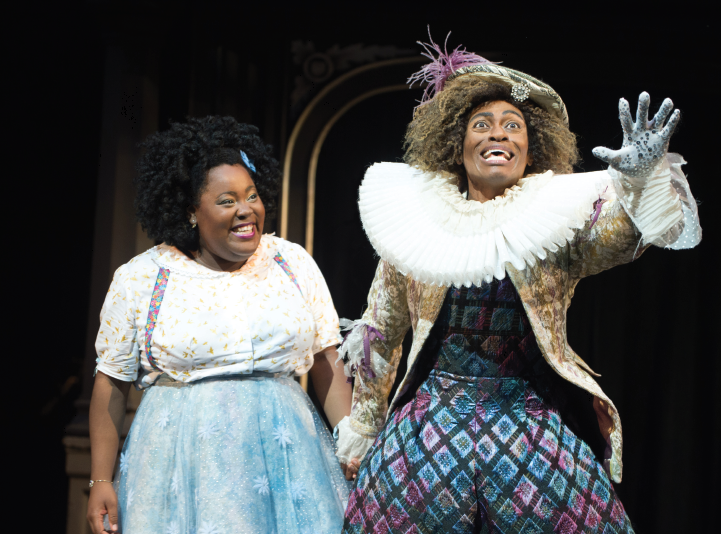 It takes about 30 minutes for OSF’s production of The Wiz to fully warm up. Up until then, the theatrical production—a retelling of the familiar “Wizard of Oz”—has been pleasant and easy-going with some moments of good humor and gospel energy.

But half-an-hour in, when Dorothy, played cheerfully by Britney Simpson, finally uncorks with her first solo, the production begins to reach its real potential, like the fuse on a glitter bomb finally reaching its ignition. It isn’t that this number is a massive production like many of the other cabaret and dance numbers throughout the production, but it is the first moment when there is true ballast to The Wiz. In fact, there are no antics in this number, as Simpson sings about doubt and fear with just a spotlight on her. But her voice is as enchantingly strong and steady as a jazz singer, and the story about self-discovery finally begins to move forward.

This number backs up directly to the introduction of the Scarecrow, which J. Cameron Barnett plays with vigor and breakdancing flexibility. Unlike the previous scene, with a single spotlight focused on Dorothy and her single voice holding the auditorium rapt, the Scarecrow number is a full-staged “Soul Train” production. With four crows flanking him—dressed sexy head to toe in black, and wearing swooping three foot black helmets—the dance number starts up with staging that would make M.J. proud. From there, the scene crescendos into a thrilling (yes, intentional word choice) choreography and Cameron establishing himself in the snap of a fingers as a magnetic dancer.

It is this flexibility and fluidity in the staging, moving from simple solos to stunning big-stage numbers, that keeps OSF’s production of The Wiz engaging, delightful and enchanting throughout.

The Wizard of Oz, of course, is one of the most enduring journey and discovery stories in American culture, although the 1939 film version has faded over years, and given ways to contemporary retellings and reimagining. In the 1960s, the storyline about finding oneself found sincere resonance in gay communities, and by the early 70s, the story was appropriated by black American culture as The Wiz: The Super Soulful Musical Wonderful Wizard of Oz. First a Tony Award winning Broadway production in 1975, the play was quickly snapped up by Motown and in 1977 perhaps most famously starred Diane Ross as Dorothy, Michael Jackson as the Scarecrow, Lena Horne as Glinda, and Richard Pryor as The Wiz. Those are pretty big slippers to fill in any of those roles, but straw hats off to Simpson and Cameron for more than holding their own with those legends.

Also deserving central stage and an extra round of applause is Dede Ayite, the Costume Director. It isn’t just the playful and sparkly costumes that borrow heavily from the disco-era, but what Ayite brings is a remarkable versatility that includes one scene of black leather forest marauders who would look in place in a Mad Max movie, and when the Lioness wanders into a poppy field, she is seduced by dancers who look as if they were dressed by some combination of Saturday Night Fever John Travolta and Ziggy Stardust. For the imaginative fashion show alone, The Wiz is worth the price of admission.

But, it is so much more than that.