Home»Feature»What’s On Tap? A Flight of Views on Craft Brewing in Southern Oregon
Feature

What’s On Tap? A Flight of Views on Craft Brewing in Southern Oregon 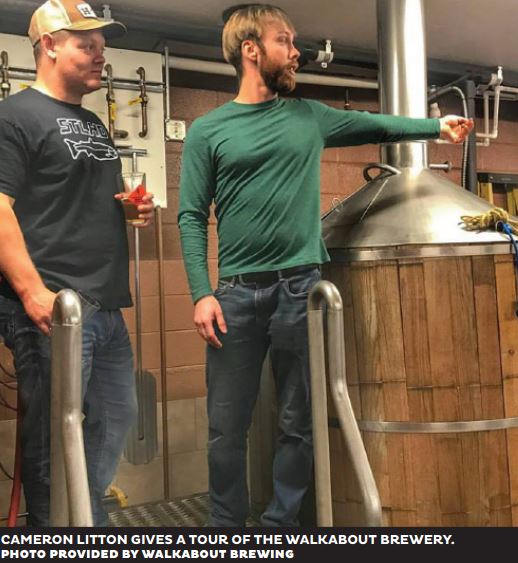 Thirty years ago, the answer to “what’s on tap?” was generally “Bud, Bud Light, Miller Lite, Coors,” maybe “Michelob” in an especially daring establishment. Even finding a bar that served Bass or Guiness required the adventurous spirit of legendary ‘80’s film explorer, Indiana Jones. No one possibly mistakes Craft Beer for a new product of the processed cheese company (and, please, local brewers, don’t start throwing grilled cheese sandwiches made from Tillamook Cheddar and Rise Up Rogue Sourdough into the brew kettle—but if you do, please call the result “Messenger in a Bottle”) any more. Craft brewing runs a close second to pears and vineyards as a prominent part of Southern Oregon’s commercial identity and features a mix of companies, settings, and products as varied as the Rogue Valley’s daily climate.

Observers and grousing early-adopters might look at the fifty different beers now offered by pioneer Southern Oregon micro-brewery Rogue Brewing, or the spread of national brewpub chains like Rock Bottom with its 30 restaurants and breweries from Portland to Charlotte, Boston to La Jolla, and call craft brewing an honest trade which has lost its way (see this week’s Drink Local column). Yet, the Oregon Brewers’s Guild’s report for 2016 details growth in every aspect of the industry. According to the Guild, 23.3% of all beer (both bottled and draft) consumed in Oregon was brewed in Oregon. Perhaps even more astonishing, 65% of all draft beer consumed in the state came from an Oregon brewery (move over Anheuser-Busch). Equally notable, craft brewing contributed nearly $4.5 billion to the Oregon economy and provided direct employment to 31,000 Oregonians. Fortunately for our fitness and our productivity, we will not have to increase our own beer consumption too much further, as Oregon’s 230 brewing companies (24 counted in Southern Oregon) also sold beer to the other, 49 less fortunate states and 37 foreign countries.

With Medford Beer Week kicking off the summer sipping season, the Messenger asked three of Southern Oregon’s longest operating and successful craft breweries and their brewers–Scott Butts and Brandon Crews of Wild River Brewing in Grants Pass (founded 1990), Cameron Litton of Walkabout Brewing in Medford (founded 1997), and Adam Benson, Caldera Brewing in Ashland (also founded 1997)—to share their perspectives on the state of craft beer. (Editor’s Note: the Wild River quotations come from an interview conducted in November, 2016.)

Scott Butts has been the head brewer at Wild River in Grants Pass for 21 years, one of Southern Oregon’s longest-tenured brewers.

Brandon Crews is the Assistant Brewer at Wild River, a position which he took up last fall after working at Rock Bottom in Portland and then helping to start Climate City Brewing. A native of Grants Pass, Crews grew up eating pizza at Wild River. “It was where all of the relatives wanted to go when they were in town.”

Adam Benson is the General Manager and Head Brewer at Caldera where he has been for seven years. He first brewed at Standing Stone in Ashland after arriving in Southern Oregon from the Bay Area. Benson is the creative mind behind Caldera’s inventive 43 beers on tap at their brewpub.

Cameron Litton, a Central Point native, is the son of Walkabout Brewing’s founder, Ross Litton. Litton has officially been on the payroll for about 2 ½ years, but he grew up in the family business helping his father cleaning kegs, filling orders, and making deliveries in the family’s Honda Civic. As the General Manager of Walkabout, Litton leaves the primary brewing responsibilities to Head Brewer, Ryan Gfroerer.

RVM: Our first question is a big one! Oregon is apparently sloshing with craft beer. Is the craft beer boom over, or is there still room to grow?

Walkabout: There are only so many bars and stores that will carry beer, and it has become very competitive. That being said, our customer base loves variety, so if you can make a great product you definitely have a chance!

Caldera: There is still room to grow with the established breweries. Those that make good beer will always find more customers.

RVM: A lot has changed from when someone like Ross Litton (founder of Walkabout) could go from making beer in his garage to having a micro-brewery. What are the major differences in craft brewing from the 1990s to 2017?

Wild River: We have always brewed old world beers to match our old world food. We are starting to get more creative to keep up with changing tastes.

Walkabout: Seeing Walkabout six packs and 22 ounce bottles, all over the Valley–that’s weird to me. There are way more options now! You can find all types of beer in stores and bars. Back then the choices were much more limited.

Caldera: Choices. You would stand out back in the nineties with six to nine tap handles. Now if you don’t have 15 or more, you are behind.

RVM: With the exception of “Messenger in a Bottle,” what new trends should the craft beer drinking public anticipate?

Wild River: Barrel-aging is one—imparting whiskey or wine flavors to the beer. Souring programs and wild fermentations, too. It’s already five years old in Portland, but it’s up and coming in Southern Oregon.

Caldera: More sours and sourcing everything as local as possible.

RVM: Are there too many craft beer choices? When we see a dozens of options in a grocery store cooler, we have no idea how to narrow them down. Suggestions?

Walkabout: Try everything once, write down the things you like and keep going back for them!

Caldera: Find breweries that have been established, and that you have liked something from before, then branch out. I would typically try new things on draft first then get it in the package. Not as much of an investment.

RVM: How does the quality of craft beer in Southern Oregon compare to the rest of the Pacific Northwest? What about nationally?

Walkabout: Southern Oregon may not have quite as many breweries as up north, but it is growing. The beers coming out here definitely match the quality. Pacific Northwest beers hold up well against beers in any other region!

Caldera: In all the competitions, Oregon and Southern Oregon always have a large percentage of medals compared to other entries and per capita.

Wild River: We have a unique combination of assets here in Oregon, not only clean water, but the best hop producers in the world in the Yakima and Willamette Valleys.

RVM: What are some of the challenges that your own breweries have overcome to stay viable? Did you think you would last this long?

Walkabout: I think the biggest challenge is just keeping relevant with so many new breweries coming out. I think that any brewery that has been around for 20 years in the Pacific Northwest should be very proud.

RVM: Describe the beer drinking public of the Rogue Valley. Sophisticated? Amateurs? Tourists? Who are your customers now, and who else would you like to reach?

Wild River: At first, we had to educate people on the difference between an IPA and Coors Light. Now, customers are interested in new stuff. We have our Rye Saison for something different–aged eight to nine weeks, with some rye which makes it a little spicy.

Walkabout: I think there are definitely a good amount of both. We like to reach both types of customer. We love to educate people about what they are tasting and also enjoy feedback from those who know what they like. We just brew the beer we like and share it.

RVM: Are there any misconceptions about life in the craft brewing business? What would you like the public to appreciate more than they do?

Wild River: We’re not hipsters. We rely on word of mouth, being involved in the community. It’s a family effort.

Walkabout: People definitely seem to think that we do not work. We actually work quite a bit in all phases of our business.

Caldera: All we do is sit around drinking beer all day. Brewing is hard sweaty work that is 90 percent janitorial or cleaning.

RVM: Where will you be 20 years from today? And your brewery?

Caldera: Hopefully retired drinking a can of Caldera on a beach somewhere.

What’s On Tap? A Flight of Views on Craft Brewing in Southern Oregon