Home»Feature»What Does it Take to Change the World?
Feature

What Does it Take to Change the World?

A Review of "The Reluctant Radical" 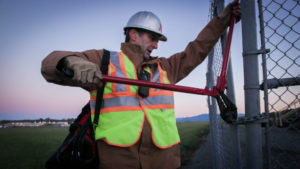 Our world is one that does not always give us tangible results, or a clear distinction between right and wrong. The consequences of our choices and actions are not always immediately visible to us, which can harm our resolve. Lindsey Grayzel’s documentary film The Reluctant Radical invites the audience to follow the long and often frustrating journey of an American activist, and makes the viewer consider the difference between what is legal and what is right in this great big world of ours.

The Reluctant Radical tells the story of Ken Ward, an Oregon activist who has dedicated himself to battling climate change. Over the course of the film, we learn about Ward’s exploits, his personal life and his family. His efforts lead him to push the limits of the law, as he persists in a world that seems to have become complacent around him. One specific event stands as a center point for the film: the attempted shut-down of a massive oil pipeline in 2016.

From the first moments of the film, we are given a taste of Ward’s conviction, as he prepares to play his part in the pipeline shutdown. The film uses bits of interviews with Ward and his family and peers, news footage from actual protests (including one particular demonstration involving a Shell boat,) snippets from home movies, and other forms of media to create a very well-rounded picture of the documentary’s messages. Music is used conservatively, and creates a non-intrusive atmosphere that allows the viewer to make themselves comfortable while hearing what the film has to say.

The film conveys the idea that raising awareness can be taxing and frustrating (especially when working alone,) but also rewarding in the long run. A balance is struck, and the viewer is left wondering where they stand on these issues, rather than yearning for a fairy tale ending.

The Reluctant Radical is an impressively assembled look at the conflicts that arise when the microcosm and the macrocosm are pitted against one another. We are often told that we can change the world, and though at times it is difficult to stay the course in the face of doubt and the enormity of our goals, it is when we set out to change the world together that our labor bears fruit. If you feel ready for the questions it provokes, I definitely recommend this one.

What Does it Take to Change the World?