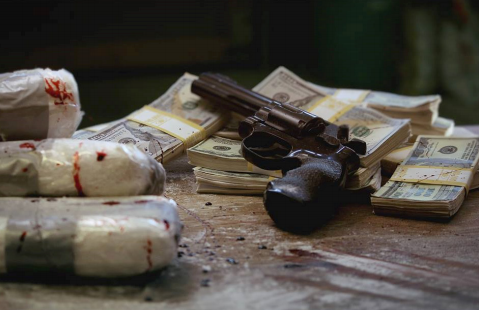 We’ve lived in those apartments. We’ve looked directly into the faces of those mountains. The thing about local film in a relatively small area is that recognizability and nostalgia get bonus points. Loose Ends sets the (familiar) scene with friends-turned-drug-peddling-colleagues Logan and Adam as the growing distance between their lifestyles and aspirations unravels them.

Perhaps an homage to the piles of well-known features on such subject matter and with such characters, Loose Ends doesn’t add anything new to the landscape (other than, of course, a familiar landscape). Like many of the films that no-doubt influenced and inspired it, this short stacks up canned male characters (complete with the big bad boss, his meticulously quirky haircut, and his generic, black-clad tough-guy bodyguard). We know Logan’s the bad guy because he has tattoos and can’t start his day at a decent hour. We know Adam’s the good guy because his hair is real neat and he wears a watch (bonus: also Biblically-named). And we know this trope (warning: can the expected be a spoiler?): Adam’s shirt is a little too white, Logan a little too naive to be an actual badass, their respective apartments (though successfully familiar) a little too on (I’m talking to you, Boondock Saints poster). The switcheroo is a given, the bundles of hundreds already stale, the meaningful pause Adam takes on his dirt-paved exit meaning what exactly?

The thing is, we’ve lived in these plotlines, too.