Home»News»We’re Losers: What We Endorse Seems To Lose!
News

We’re Losers: What We Endorse Seems To Lose! 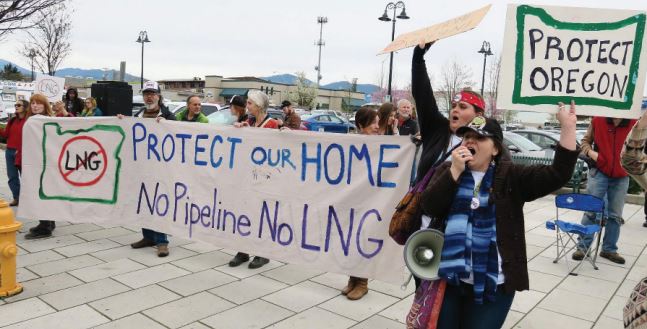 In our last issue, we pointed out three races that we considered “really, really, really” important—and made endorsements. Of those, two of out three went the opposite direction from our endorsements, which, even in baseball, isn’t a very good batting average.

The first of those three is the biggest disappointment, but the least surprising—and proves the common political wisdom that nine times out of ten, the ballot measure or candidate with the most money will win. Such was the case for Measure 6-162, a ballot imitative in Coos County that had the goal to derail the proposed LNG pipeline. At the heart of the proposal was the idea to make the transportation of “fossil fuel” through Coos County illegal (excluding that for residential, commercial or industrial on-site uses). The initiative was the latest Hail Mary to try and stop the pipeline that plans to cut across 330 miles of southern Oregon and threatens to add emissions to global warming.

Twice before, the LNG pipeline has been denied permits by a federal agency, but after Donald Trump’s election, the company trying to build the pipeline saw an opportunity. While Measure 6-162 was far-reaching, there was something incredibly admirable and bold about the proposal.

It was crushed, and leaves open the distinct possibility that the pipeline may actually happen, a proposal that the White House has gotten behind as part of its campaign to make multinational corporations great again. (In spite of the support, the company that would own and profit from the pipeline is Canadian and reportedly most of the labor will come from overseas.)

Our second endorsement that fell short was the most egregious and disgusting election result:

Natalie Richie, a political newbie and anti-tax crank, won a seat on the Rogue Valley Transportation District board with 54 percent of the vote. She beat out Stan Littrell, a decade-plus transit board veteran, Medford resident and, salient to the matter of public transportation, is blind. Littrell doesn’t drive and relies on public transportation. He understands the critical need that public transportation provides for elderly to go shopping, for cash-poor students to get to their college classes and work towards their careers and for persons like Littrell to get around.

What makes Richie’s win so distasteful is that she ran on an anti-public transportation campaign—for a seat governing the struggling public transportation system. In the voter pamphlet she boasted that she—and no one in her family—have “ever stepped foot on an RVTD bus.” Not unlike the crank spouting her mouth at the end of the bar, her theory seems to boil down to, if she don’t use it, why does she have to pay for it. This is simply a mean-spirited and selfish vote that reflects on recent national political attitudes that ask not what we can do for our communities, but what our communities can do for us.

But, in two counter-trends to this anti-tax, anti-public service, me-me-me sentimentality (sung in C-sharp), her husband, who also has spouted the same solipsism lost his second races in as many races: Richie’s husband Steve came up way short as a Jackson County Library District position. Touting an anti-tax platform, he was soundly—and thankfully for the sake of literacy and community—thumped, nearly 2 to 1 votes.

Also, voters turned away Curt Ankerberg, who is a perennial candidate (he has lost eight previous attempts at elected office) and also fits into the anti-government, anti-tax mold. Ankerberg was running for Medford School Board this go-around. (In previous elections, Ankerberg has raised hackles, calling us an “ass-clown” when we submitted questions to him about his city council candidacy and, in 2010, having the Jackson County clerk filed a complaint with the sheriff’s office against him after a confrontation over a clerical matter that left employees there feeling threatened and, in 2013, verbally assaulting another candidate during the Mail Tribune endorsement interview.)

Imminently qualified, Jeffrey Kinsella won the election. A teacher in LA for a decade before moving to Medford and teaching both at the middle and elementary school levels for another two decades, Kinsella has been volunteering on the district’s budget committee and now steps into a more formal role, and helps the Medford School District continue its two year turnaround.

Perhaps the most interesting theme in the elections throughout southern Oregon was the slate of unopposed candidates, from school districts to water bureaus. It is telling, though, how much a candidate is supported, though, by his or her performance in an unopposed race. Out of a couple dozen unopposed candidates, only one actually scored a perfect 100 percent of the vote—the Prospect Fire District elected Carl James with 160 votes, and not a single write-in against him. Charlotte Anne Water District Commissioner elected Keith Schwartz with166 votes, and only one write-in against him. But, interesting, in the Butte Falls School District, Pos. 1 election, Daniel Murphy, running unopposed only earned 70 percent of vote from 182 total, with 30 percent writing in other candidates.

We’re Losers: What We Endorse Seems To Lose!