We Make Films; Yes, We Do! Local Filmmakers Make a Strong Showing at Area Film Festivals

Forget Hollywood—the Rogue Valley, it seems, is an up-and-coming rival for the epicenter of filmmaking, and these local talents are ready to strut their stuff at area film festivals: the Jefferson State Flixx Festival (JSFF) September 21 – 25 and the Klamath Independent Film Festival (KIFF) September 30 – October 2—both of which are featured in this issue. Here is our complete local listing, and which festival to see the real deal at.

Becoming
Matt Adkins/ Michael Bryant – Ashland
KIFF with filmmaker Q&A
1 hr. 5 min.
Becoming follows the Southern Oregon University Raiders football team from a chronic losing seasons to their national championship a couple years ago. All it took was a change in mindset from a new head coach. And some practice.

Biff and Buster go to the Races
Zachary Pearson – Ashland
KIFF
1 min. 1 sec.
Brief, but a fun, animated tale about a kid named Biff and his outing with his imaginary friends to the racetrack.

Black Road
Gary/Anne Lundgren – Ashland
KIFF with filmmaker Q&A
1 hr. 21 min.
Fast-forward to the future of the mythical State of Jefferson in the year 2029. Dylan, with his AI implant Clyde, is left to wander after being kicked to the curb as a failed military experiment. He finds himself in the unique situation of saving a strange woman’s life, and unwittingly gets pulled into her dangerous world.

Breath in Three Verses
Kathy Roselli – Ashland
JSFF
15 min.
A film focused on one of our most human impulses: breathing. Through sight and sound, music and observation, carefully crafted “verses” take us on a journey that reminds us to take a deep breath. 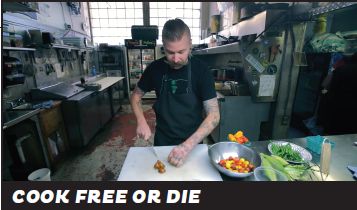 Cook Free or Die
Jared Hail – Medford
KIFF
3 min. 42 sec.
Mike Hite and David Navarro have many things in common: from Oregon, lovers of metal music, bearded and tattooed, and they both are passionate chefs.

Dear Future Self
Ray Robinson – Medford
JSFF and KIFF
8 min. 35 sec.
Buried under a few feet of dirt and 50 years, a woman discovers a time capsule that she made, which held a recording to herself that sheds insightful light on her past and present self.

Endurance
Bryn Lanning – Ashland
KIFF
7 min. 51 sec.
Being in the hospital allows for ample time to think, and many different people to learn from. A terminally ill man’s story inspires another patient of the hospital to take that time to think about his life.

Klamath
Aaron Moffatt – Ashland
KIFF with filmmaker Q&A
54 min.
To the tune of classic music, filmmaker and narrator Aaron Moffatt takes viewers through the unseen wonder of the Klamath-Siskiyou mountains, all the way to the Pacific. Including all the diversity of the seasons and wildlife, Klamath is a gorgeous reminder of all the beauty in our little corner of the world.

Life, Adjusted
Sean Nipper – Ashland
JSFF and KIFF
1 hr. 5 min.
Life, Adjusted is the touching story of a horse named Dizzy, who didn’t get her name from drunken escapades. Following severe abuse, she suffered from mental and physical trauma, which was only relieved by caring, patient chiropractic care. Dizzy gets her groove back, and learns to trust again. 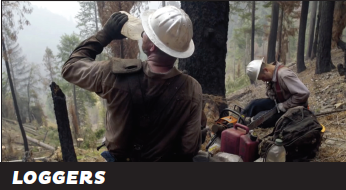 Loggers: Earth’s Unsung Heroes
David Kirk West – Medford
JSFF and KIFF
10 min. 13 sec.
Logging isn’t all metal and machinery eating up the forest. The loggers who do the work to maintain the renewable resource of wood are featured in their natural habitat.

Lonely As God
Sasha Flamm – filmed in Happy Camp, CA
JSFF
14 min.
A peek into the gold mining days of yesteryear through the stories of present day gold seekers in Northern California.

Love Affair with Square
Anja DuBois – Ashland
JSFF
11 min.
A look at Southern Oregon’s forests and the city of Ashland, through the encumbering grids of maps and the freeing view of landscape.

Robot Love
Ross Williams – Talent
JSFF
4 min.
Traveling from the future forward to the present, Robot Love tells the tale of a robot who appears to be chasing a woman with evil intent.

Ruggers
Alison Hoffman – Ashland
KIFF
6 min. 55 sec.
The inspiring story of the birth of the Southern Oregon University Women’s Rugby team, and its impact on the players’ lives.

We Make Films; Yes, We Do! Local Filmmakers Make a Strong Showing at Area Film Festivals