Update on Mt. Ashland: A Winter Yet to Come 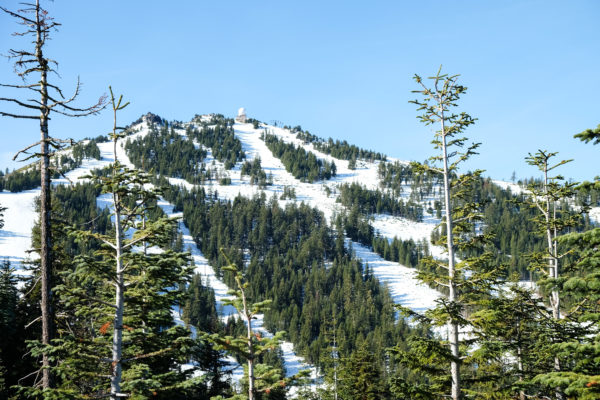 The Mt. Ashland ski area was open a mere eight days as of early February, this season, but that’s not keeping Hiram Towle, Mt. Ashland’s general manager, from holding out hope.

“We’re simply waiting for more snow, hopefully by the end of this month,” Towle said.

According to Towle, the ski area usually remains open through the second week of April, but longer if weather permits.

“We still have a good two plus months until the end of the season,” Towle said. “People just need to be patient and as soon as the snow comes, we’ll get it fired back up again.”

During the short time the ski area was open, snow was strategically moved to where it was most needed to prolong the inevitable.

“We used every last bit of snow that we had,” Towle said.

The cause of this dry heat wave in February (and the one in January) are due to a high-pressure system, according to Towle.

The National Oceanic and Atmospheric Administration (NOAA) is calling for La Niña through the winter and into the spring, which is normally good for snowfall. However, because of the high-pressure system blocking the storms from passing over the ski area, the snow is not likely to fall until the next system pushes the ridge out of the area.

“March and April should be wetter and colder based on the Climate Prediction Center,” Towle said.

In fact, the ski area is hoping for snow to fall before the next Mid-Winter Jam Series party Friday, March 2. Regardless, the event will still proceed from 3 pm to 9 pm. With snow, day time and twilight skiing will also be available.

“During La Niña, the Pacific jet stream often meanders high into the North Pacific and is less reliable across the southern tier of the United States,” according to the NOAA website. “Southern and interior Alaska and the Pacific Northwest tend to be cooler and wetter than average.”

The website also states that this information is what typically happens in a La Niña winter, but is not so easily predicted. Also, that this weather pattern influence is strongest in the winter months (December through February), but may linger through spring.

So, in theory, Southern Oregon could still have a chance of a decent snowfall this season.

But additionally, the lack of snowfall negatively affects the Ashland watershed as well.

“We’re the big, frozen reservoir for the city of Ashland,” Towle said. A portion of the city’s water comes from the snowmelt. Not to mention that a dryer than normal forest encourages forest fire, Towle said.

Just last year, the ski area was the first in the country to become STOKE certified. STOKE stands for “sustainable tourism operator’s kit for evaluation.” It’s a sustainability certification. During the same time, the lodge underwent extensive renovation including an added 1,000 square feet of space and multiple improvements to the interior design of the building.

Towle said the non-profit’s sustainability is more important now than ever before.

“All of the things we’re doing with the STOKE certification is to combat these things – to lower our carbon footprint and our effect on the environment,” Towle said.

He also said that because of the slow season, the ski area has tapped into its rainy-day fund.

“We’ve had to lay off all of our hourly employees,” Towle said. “We’re running on a small crew of salary employees right now.”

Before the low snow year of 2013/14 there was a solid ten years of average to above-average snowfall for the mountain. It’s just a matter of waiting out the lull.

So, to all the winter sport enthusiasts out there, a recovered snow pack is expected for the coming months. Just sit tight.

Update on Mt. Ashland: A Winter Yet to Come