Home»Culture»Two Comedians Are Better Than One? The Push and Pull of the Divided Comedy Tour
Culture

Two Comedians Are Better Than One? The Push and Pull of the Divided Comedy Tour 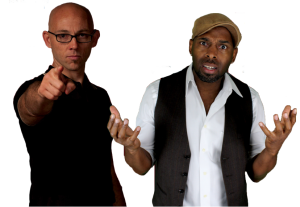 Part science geek, part raw honesty of Richard Pryor, Ian Harris shoots from the hip. A standup comedian for the past 20 years—minus the decade long hiatus he took to raise a daughter, before storming back for his current second act—Harris is a veteran comedian, but he also approaches the stage with the giddiness of a puppy.

In the Divided Comedy Tour, Harris has teamed up with fellow comedian and friend, Ty Barnett—who, with appearances on the Tonight Show and Comedy Central Presents, and a 2006 runner-up in Last Comic Standing, is one of the hottest comedians currently touring. The two comedians are as much alike as they are different, and the give-and-take between them is as much as intellectual tug-of-war as a philosophical punch-and-judy show.

Harris sat down to give the Messenger some insights into his career, and performing in front of his family. (Harris is a live wire, and had a lot more to say than we could fit on this page. Check out our website for our more complete conversation.)

Rogue Valley Messenger: You’ve had some big appearances and stages, like Jimmy Kimmel Live and Comedy Central. What does “success” in the comedy business look like for you? Is it measured in fame and name-recognition? Money? A TV deal?

Ian Harris: I think there are many versions of success, and variables. I personally took about five years off, after going comedy for a living for over 10 years. I felt marginalized by the industry and had had a daughter. I did not want to be that guy who had to do one-nighters for there rest of his life to make a living and never know my own kid. Luckily, I have quite a few skills to fallback on. I am pretty successful as a voice over artist, I was a freelance commercial editor for a while, a writer and I train MMA fighters; plus my wife has a great steady job. I came back to comedy for several reasons.  I just love the art form. I identify as a comedian; it is what I have been doing since I was allowed into the club. But I had not reached the level of success I set out to achieve. I always wanted to at the minimum have an hour special that I can be proud of that my daughter one day could watch and know what I was about. I was lucky enough to make that happen.

RVM: Your comedy is not for everyone. I mean, it isn’t what people would call “safe.” How much do you consider who is in the audience, and play to that, and/or, how much do you just roll out with thunder, hell-be-damned?

IH: You know, I have several different sets depending on the show. My personal favorite is talking about science and beliefs; however, as we all know that can get really dicey in the wrong crowd. Not that I like to curb what I do or pander, but I know this is a business and I entered into that agreement. I still will find a way to talk about what I want to talk about. I just approach things a little differently. When we do the “Divided Comedy Tour” the whole idea is that we might talk about things that people don’t all agree with. Either way, we are there to make you laugh, but I am not going to compromise what I believe, what I think is funny and I am always going to try and make my point. Funny thing is that I never try to offend anyone. I almost never do toilet humor, dirty sex humor, etc. I just talk about ideas that I find funny or silly.

RVM: You have a lot of family in the area—sister, aunts, cousins in Ashland and Medford. Is that tough to have family in the audience? Does that mean you’ll tone down the show?

IH: Yes. My dad lived in Medford for years. I have a ton of family up here, from Ashland to Grants Pass. Uncles, aunts, cousins and very recently my sister moved to the area. They have all been watching me do comedy since I started. I have an incredible, supportive family who are all pretty damn funny in their own right. Most of my family is pretty open. I am sure we don’t all agree on everything, but they are open-minded people and they know who I am. That is the great thing about being from a family like that; even if they don’t agree with you, they support you. One of my big gripes with many religions, dogmas or even political ideologies is that people will disown their family over such things. To me that is crazy. Your family should be the one’s who understand you most and find ways to support and love you even if they disagree.

RVM: How did you first know you were/are funny?

IH: I started doing impressions at age five or six. People think I am making that up, but it is true. I train MMA fighters in my spare time, so I started boxing at age six. I would watch a lot of boxing and would get so excited I would wake my parents up to give them play by plays of the fights… as Howard Cosell. Then do the after fight interview. I’d do Ali, Holmes, Cossell. That continued my whole life. I would talk in impressions. I really got into Billy Crystal, Richard Pryor and Eddie Murphy at a young age.  I remember (and my fellow comedians will give me hell for this) as a kid, my family would always watch the Gallagher specials on HBO. Then in high school Dennis Miller and George Carlin. I tried to get booked at the Punchline comedy club right out of  high school, but of course they weren’t having that.

RVM: How do you categorize your relationship with Ty: Butch & Sundance? Thelma and Louise? Belushi and Aykroyd?

IH: That is a good one! Well I don’t plan on driving off a cliff to my death with Ty, literally or comedically. Plus I don’t think Ty, as a black man in America wants to be involved in any high-speed car chases with the police even with a bald white guy in the seat next to him, so Thelma and Louise are a no. Maybe Lemmon and Matthau? Pryor and Wilder is who I would love to be, but aside from the obvious, not sure which one is which.

Two Comedians Are Better Than One? The Push and Pull of the Divided Comedy Tour