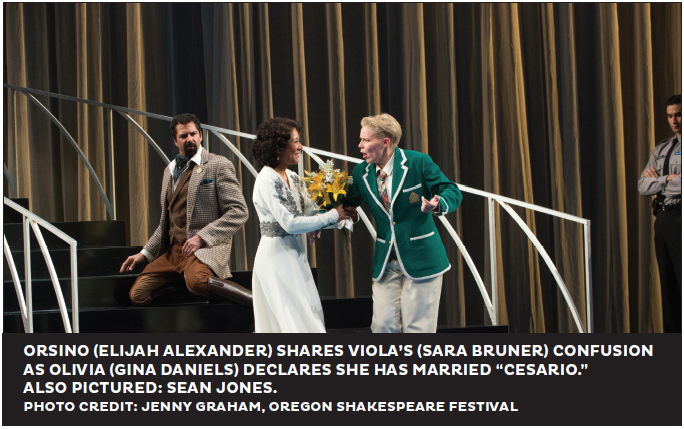 There’s no one word fit to summarize OSF’s marvelous adaptation of Shakespeare’s Twelfth Night. It’s funny. Raunchy. Tragic. Surprising. And, with Sara Bruner’s performance of both twins Viola and Sebastian together in the final scene, it’s ultimately transcendent.

Obviously, Shakespeare never knew that 1930s Hollywood would come to be, but it’s uncanny the way his script fits almost seamlessly over this world. Instead the Kingdom of Illyria, we have Illyria Studios, and instead of ladies and counts, we have starlets and directors. Their entourages fit the supporting roles of ladies maids, servants and advisors. The script remains untouched, and it is through flawless costuming and staging—along with a couple of irresistible musical numbers thrown in—that the production team makes the time shift unmistakable.

The women’s rights movement was not immediately looming in Shakespeare’s time, but by the way this play is written, you would think that it was. The defining power of the plot is Olivia, played by Gina Daniels, the starlet who’s set her director’s world upside down by refusing to work—or see him. Also wielding huge force on stage is Sara Bruner’s character (her main one), Viola, who has dressed up as a man and calls herself Cesario. New to Illyria, Cesario soon has everyone—director and starlet included—wrapped around her beguilingly innocent finger.

The electric dynamic between “Cesario” and Olivia carries the play. In this “eunuch,” this man who doesn’t carry the typical pretenses of masculinity, Olivia finally finds her match—and of course he resists her every advance. Watching them dance around each other is deliciously tortuous. Meanwhile, because Cesario/Viola is desperately in love with Olivia’s director, Orsino, her disguise seems constantly on the verge of breaking. With typical Shakespearian wit, Orsino is much too self-absorbed to notice.

Speaking of torture, the irresistible antics of Olivia’s houseguests provide even more comic relief. Danforth Comins performs beautifully as a potential suitor, balancing a martini glass in his hand through every scene and grinning doltishly between booze-reddened cheeks. He and Olivia’s sodden Uncle Toby, played by a delightfully rotund Daniel T. Parker, and the fiery assistant Maria, played by Kate Mulligan, cook up schemes that always seem to require a song. Luckily, there’s a Fool, er, fellow film actor, named Feste (Rodney Gardiner) to kick off the singing and then spout some truly wise “foolishness.”

The subplot of Viola’s twin brother, Sebastian, also played by Bruner, brings the tragedy. The man who has rescued Sebastian from the “yachting accident” that marooned both twins is clearly in love with him. In the end this character is not shunned or killed off as one might expect, but fades mysteriously from the scene as if he was never there in the first place, an experience that homosexuals throughout the ages can surely relate to. Saving someone’s life and loving them enough to risk your own is only the subject of great art if it is socially acceptable. The fact that Shakespeare touches on this unwritten history is another mark of his timeless genius.

Anyone who goes to see Twelfth Night at Oregon Shakespeare Festival is sure to be entertained, whether they’re a scholar of the Bard or don’t understand a word. The showmanship, the visual feast, the music, and of course the spellbinding acting make it worth the ticket price and much more.