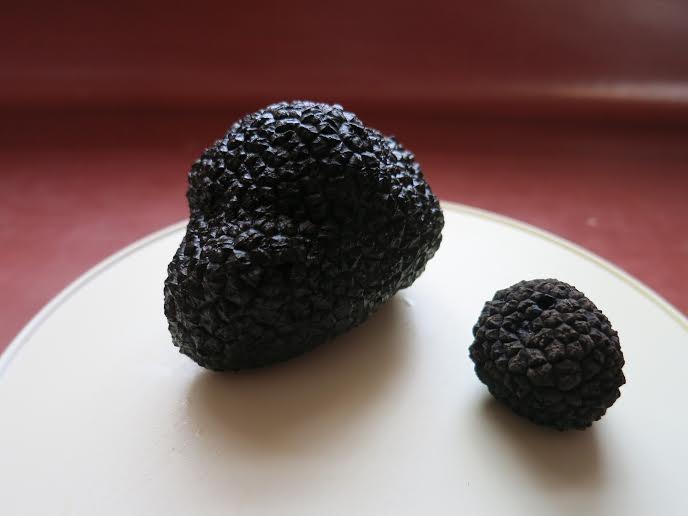 The smells of musk, old leather, garlic and bitter chocolate—of French Périgord truffles—are permeating Rogue Valley soils for the first time ever this truffle season, as Périgords have been successfully grown at the Vaughn Family Farm and Orchard in Central Point and the Frownfelter farm in Talent. This distinct, and notoriously finicky, fungus (dubbed “black gold” or “the diamond of Périgord”) is the pinnacle of haute cuisine globally and, because it must be eaten fresh, is best when locally grown. Its arrival on the scene could be the beginning of a new trend in Southern Oregon restaurants interested in coming along for what truffle farmer Greg Frownfelter calls “the truffle adventure.”

In early January, truffle dog Gucci and her handler Marilyn Richen, did the rounds of local (hopeful) truffle orchards, unearthing three ripe French Perigord truffles at the Vaughn Family Farm and Orchard in Central Point. Right away this news sent a buzz through local foodie markets, like the Fry Family Farm, where chef Skyler Golden said, “it’s exciting for chefs to have another local ingredient available to us, and one that is such a delicacy, adding to all of the other great wild and cultivated ingredients in Oregon.”

A bit of history: Périgord truffles (aka tuber melanosporum) are not native to the US, but are a Mediterranean truffle named after the Périgord region of Southern France, where they have historically been cultivated. One of the world’s most valuable fungi, fetching from $80-$120 per ounce fresh, the more adventurous of farmers undertake their cultivation in a spirit of adventure, of sport. After planting orchards of inoculated hazelnut or oak trees and lovingly maintaining them for years, they then keep their fingers crossed. These trees require intensive management: the soil conditions must be just so, not to mention irrigation, pruning and trucking in lime and other pricey inputs. Despite this, Nancy Vaughn, owner of the Vaughn Family Farm and Orchard, claims to have largely ignored the truffle orchard planted by her late husband Ed, calling this corner of their pear farm “Ed’s Folly.” Jose Luis Serna, who runs the Vaughn farm operations, has continued to maintain the unusual irrigation system Ed Vaughn set up in the truffle orchard (using sprinklers called Wobblers). “I’ve been working with pear and peach trees for thirty years,” says Serna, “and you get to know the trees and what they need.” He also admits that a visit from mycologist Charles Lefevre, who showed him truffle-specific pruning techniques, would become part of future practice on the orchard.

The Vaughns’ hazelnut trees are producing truffles thanks to the fungal symbiotic body occurring on the trees’ roots. These trees were inoculated with the spores of the Périgord truffle as seedlings before Ed Vaughn bought them from Charles Lefevre of New World Truffières. Another farmer who planted Lefevre’s truffle trees is Greg Frownfelter, who owns a newly producing truffle orchard in Talent. He attributes his success to eleven years of care—of irrigating, pruning and hauling in lime. The undertaking is thus, by necessity, a labor of love before profit. Frownfelter says, “we will be searching for new ones weekly, hoping to have enough for sale locally in the next few years. I would love to see Southern Oregon become a well-respected truffle destination for folks who appreciate a good food experience.”

Chef Skyler Golden is already priming palates for the truffle experience and is enthusiastic about buying up locally grown Périgord truffles. His new undertaking, Truffle Pig Craft Kitchen, is a farm-to-fork food trailer that serves up Oregon white truffles at private parties and wineries in Southern Oregon. Golden hasn’t had the opportunity to include Périgords on the menu yet, as they should be served fresh to be worth the price. Golden visited the Vaughn Farm to see the Périgords in person, and says he hopes to buy up future harvest to serve at Truffle Pig.

The truffle season is not yet over, so there are doubtless more truffles to be uncovered. Up in the Willamette Valley, where there are two producing Périgord truffle orchards—Pat Long’s outside of Corvallis (last winter, Long made the first sale of an Oregon-cultivated Périgord truffle to chef Matt Bennett of Sybaris Bistro in Albany and sold to Marché in Eugene this winter) and Simon and Linnet Cartwright’s orchard in Cottage Grove—at this rate, the supply may outpace local demand. This means either that chefs need to get on board or that word (and experienced truffle brokers) needs to get moving.

Last week, attendees of the Oregon Truffle Festival in Eugene, run by Charles Lefevre and Leslie Scott, were definitely talking about this new production. Conversations abounded about what Vaughn’s and Frownfelter’s successes indicate for Oregon truffle orchard management practices, and what more Perigord truffles means for the West Coast truffle industry and for local seasonal menus. Hearing of what Nancy Vaughn calls her and Serna’s “benign neglect” of their orchard, and Frownfelter’s persistence and patience with his, new truffle farmers found encouragement. The truffle festival featured chefs from restaurants in Eugene, Portland and beyond, serving up a five-course dinner including dishes such as an Oregon black truffle fondue and an Oregon white truffle mille-feuille topped with Oregon black truffle cream.

Beyond the palate, and more importantly perhaps, successful truffle farms are ushering in a new, small-scale agricultural industry for Oregon, providing a boost for the farming economy with cultivation practices some call an ecological boon. Peter Oviatt, a researcher at MIT who works with truffle farmers in Oregon and France, accounts for such claims as “a hotly debated topic in France and Italy for a while now.” He also speculates that with the Oregon truffle industry hitting its stride alongside California producers, “truffle farmers will need to strengthen their regional association along the lines of those found in France, in order to exchange techniques and have some control over how the industry progresses.”