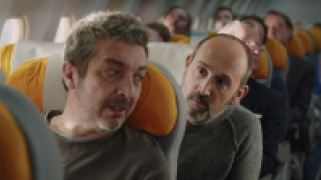 They say that true lifelong friends are the ones who can appear after years of distance or silence, and greet you as if they had never left. Cesc Gay’s film Truman gives us a look at one such friendship. Our protagonists: Julian, who has been diagnosed with terminal cancer, and Tomas reunite when Tomas comes to visit for four days. During this time Tomas helps Julian get his affairs in order, and interview adoption candidates for Julian’s beloved dog, Truman. Through this reunion, we watch our heroes, and the people around them, deal with their emotions and grief in their own ways, in what amounts to a very earnest and heart-warming tale of friendship in times of tragedy.

At no point did this film feel over-done or exaggerated, and the performances given by the cast felt very natural and believable. Julian’s realization of the finality of his situation can be felt just by watching him, and the care and devotion he shows to Truman make him very likable (even if he can be a bit blunt). Tomas’s grief over losing an old friend creates a slow burn which makes his journey all the more compelling. The audience is meant to be right alongside Tomas, as if we are watching a dear old friend of ours in his final days. The soundtrack, a lovely arrangement of soft guitar music, creates an atmosphere that gives permission to the viewer to make themselves comfortable, while allowing them to feel their emotions without shame.

Seeing a friend or loved one for the last time is a painfully relatable experience for many of us, and this film handles the weight of that deftly. Nothing forced, or overblown, and not a word wasted. Strong, believable performances, a pleasant soundtrack, solid writing and a full cast of likable characters make Truman a wonderful, if melancholy, experience indeed.