Trademarks With Attitudes: The Slants Fought the Law and They Won 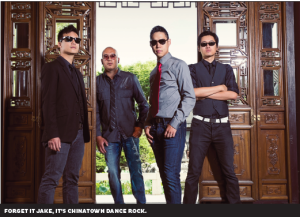 Young says that while on its face it seems like a good idea to ban trademark registrations that could be considered immoral, or disparaging, the problem with the statute lies in the ambiguity of terms like immoral, and the historical lack of nuance in its application.

“More often than not these bans are levied against people of color or individuals from the LGBTQ community,” he says. “In other words people who are trying to re-appropriate these terms.”

The Slants are one of those groups doing the re-appropriating. The band is so-named because its members are all Asian, and self-identity their sound as Chinatown dance-rock.

“We like to call it Chinatown dance-rock because it’s a place of our Asian heritage,” says Young, lending some helpful clarification. “It’s really a place where a lot of Asian-Americans feel accepted or felt like home. We kind of use that as a metaphor.”

And that Chinatown dance-rock sound borrows heavily from the euro synth pop of the 80’s—a welcome departure from the thick rimmed, flannel-laden indie-pop that is a the Rose City staple.

“We get a lot of comparisons with Depeche Mode, the Cure, New Order, and modern bands like the Killers,” says Young. “Well, at least before the Killers started to sound like Bruce Springsteen.”

Since their formation in 2006 the Slants have accumulated a large following. The group is particularly popular on the anime convention scene, and uses the convention format to commune with fans.

“When we play at anime conventions we are spending three or four full days, like all day all night hanging out with them, we really get to know them on a personal level,” says Young. “It’s a lot different from rolling up to a club and playing for 45 minutes, then trying to sell some merch and take off.”

The Slants have wasted no time in putting their popularity to good use, calling attention to important nonprofits and lending a voice to demographics often marginalized by mainstream media.

“Our fans know what we are passionate about and they have similar values,” says Young. “It’s pretty incredible what you can make happen when you can connect with people on that level.”

And sometimes pretty incredible includes permanently changing US trademark law. Thanks to their outreach and legal efforts, other bands and organizations facing similar discrimination will be given opportunity to protect their intellectual property via trademark. Although the other side of the coin is that it also aids the case of those whose trademarks are not re-appropriation, but derogatory, most notably, The Washington Redskins, whom The Slants found as unlikely allies in their trademark case. Young doesn’t buy Washington team-owner Dan Snyder’s line that the name honors Native Americans, saying its pretty obvious they feel otherwise, but…

“The cure for racism and bad speech isn’t censorship,” he told The Washington Post.

Trademarks With Attitudes: The Slants Fought the Law and They Won