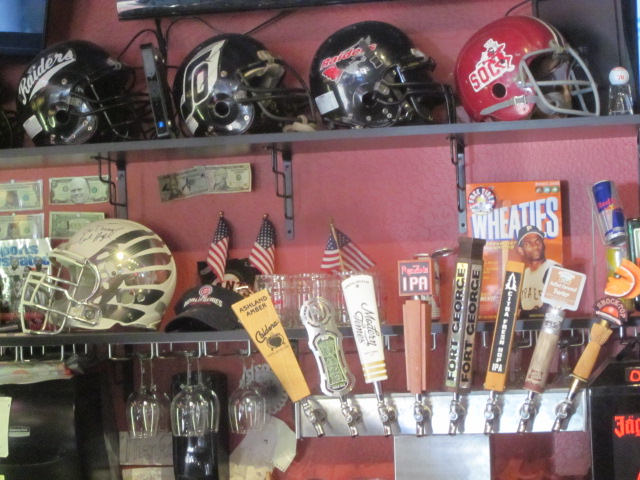 There’s hardly a Rogue Valley bar or restaurant without a television on, but two flat screens in the corners do not equal sports bar. Rather than emphasize just beverages or food, the sports bar melds them with fandom and the drama of athletic competition. If you can’t be at the stadium, you can be there in spirit, sharing the contest’s ups and downs and decent beer and burgers.

In fact, no one will suffer for lack of brews or beef at JD’s Sports Bar in Grant’s Pass, The Zone in Medford, or The Red Zone in Ashland. JDs leads with a 1.2 Taps/Tables Ratio (18 taps/15 tables); Medford’s smallish Zone carries an .800 TTR (8 taps/10 tables); and Red Zone trails at .750 (12 taps/16 tables). JDs tries a challenging brewpub/sports bar combo although the six beers sampled recently were Double-A level at best. Both Zones feature talented Oregon micro-brews and utility national brands on tap.

Ashland’s Red Zone covers its tap weakness with an aggressive 19 televisions for a 1.118 TVs/Tables ratio (TVTR). JDs and the Zone manage only 12 TVs apiece, few much bigger than an average man-cave model. Between smartphones and flatscreens, Red Zone might consider an Automated External Defibrillator to handle any flashing-light-induced seizures.

The TVs imply commitment, but the decorations say, “baseball team 30 games out of first—by August.” The Zone is mildly enthusiastic about UFC for those who cares to watch deliberately scheduled human savageness. The TVs at Red Zone leave little room for team spirit, just a small display of SOU helmets. JD’s boast the most intriguing sports souvenir, a signed jersey from Olympic and World Champion decathlete, Dan O’Brien.