Thunderous Indeed: The Yawpers Acoustic Guitars Go Up to 11 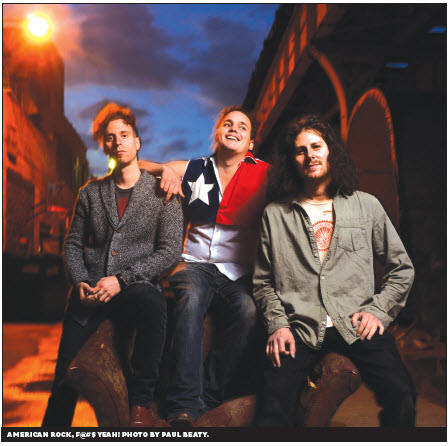 If you show up to Johnny B’s on November 11 and watch as Denver band The Yawpers sets up, you’d be forgiven for getting the impression that they’re an Americana band, casually strumming out some folksy tunes about the open road and if it might lead you to long lost love. After all, what else can a band do with two acoustic guitars and a drum kit?

The answer is balls-to-the-wall rock.

“The evolution of rock and roll has really just been the addition of amplifiers and pedals, but the attitude is still the same, regardless of whether you’re acoustic or electric,” says Noah Shomberg, The Yawpers’ drummer.

The Yawpers meld a raunchy acoustic roots sound with the ferocity of thrash, a combo the band calls “American rock.”

“I think a lot of our inspiration for the rock music we play is deeply rooted in the old blues guys,” says Shomberg. “A lot of our inspiration comes from ’50s rock and roll artists, Elvis, Johnny Cash, RL Burnside, the guys that really took the blues and speed it up a little bit to create rockabilly and the foundation of what rock is today. … I think people dig it, it’s unusual—two acoustic guitars in a rock and roll band producing a heavy sound.”

The heavy sound caught the ear of Bloodshot Records, who signed the band after seeing them perform at this year’s SXSW festival in Austin, TX. Bloodshot will release The Yawpers’ second full-length album, American Man, on Oct. 30.

Shomberg says the band worked hard to capture the energy of its live performances on the recording.

“We did this album, no click track, minimal overdubs, just tried to capture us playing in a room at the same time,” says Shomberg. “You’re going to feel the tempos move at times and in ways that they would move in a live show. We push it in some parts and slow it down in others. We want the audience to feel that with us, as opposed to recording to a click track and having a homogenous tempo throughout the whole song. The chaos is what fuels that live experience.”

Shomberg says it was the first time as a drummer he’s ever ditched the click on a recording, which he found exciting.

“As a drummer, you sometimes feel tied down to the click,” he says. “It can keep you from playing instinctually, or from the heart.”

And if American rock is anything, it’s straight from the heart.

Thunderous Indeed: The Yawpers Acoustic Guitars Go Up to 11