Three Cups of Tea in the Rogue Valley: Dobra, Round Table Tea Co., and Uber Herbal Serve Tea in Style 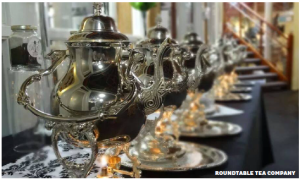 Oh sure, coffee is hot, as in trendy, for the last 20 years, and pre-dates the beatnik coffeehouses of the 50s and the Starbuckian culture overhaul of the 90s all the way back to the 15th century. But that’s like a blink of the eye in the history of tea, with its first historical recording around 59 BC.

At any rate, three establishments in the region stay true to the ancient brew. Dobra Tea in Ashland, Round Table Tea Co. in Medford, and Uber Herbal in Grants Pass offer pleasant atmosphere and a place to sit and sip.

TP: Dobrá Tea’s success is in part due to its unique take on tea and the meaning of a tearoom. We are very intentional about the setup of the tearoom from décor and colors, to furniture, smells, and ambience. The purpose of the tearoom is provide a special place where an individual can come alone or with friends to momentarily leave the “din of the world” behind. Our goal is that people leave the tearoom feeling better than they did before coming in.

TP: Dobrá Tea is a collective of eight US tearooms, which first opened in Burlington, Vermont in 2003 and over 20 Dobrá Tea rooms in Eastern Europe where Dobrá began in Prague in 1994. With a vast network of intimately connected tearooms, Dobrá Tea is able to source healthy teas directly from individual farms in the tea growing countries of China, Japan, Taiwan, India, Africa, Korea, and Vietnam.  In all of the tearooms, you will find photos from Dobrá travels, tea plants, tea workers, production, and farms. The origins and history of tea is just as much a part of the process as drinking a cup in the tearoom.

RVM: What mistake do people usually make when making tea at home?

TP: Tea that is not brewed properly can be too weak, strong, and/or bitter, but properly prepared, high quality teas can yield multiple, delicious infusions.  There are many factors that can influence brewing – the quality of the tea, the amount of loose tea in the pot, water temperature and quality, infusion time, and even the vessel one drinks from.  Any one of these can make or break a cup of tea, and the lover of tea might consider them all equally important. Yet, with so much attention to detail, I would caution one not to lose sight of the essence of tea. At the foundation, the real beauty of drinking tea is in the appreciation of tea itself, whether served loose in an antique teapot or bagged in a paper cup.

RVM: Why open a tea shop?

EB: For nine years I brewed spicy chai and other elixirs via Heartsong Herbal Brewing Company. I closed in 2008, became a mom and pursued a lifestyle of farming. Everything I cultivated led me back into the kitchen and local people encouraged me back into the tea making business so I began Uber Herbal. For three years I only sold my product at the Ashland Saturday Farmers Market. The business kept growing and the home kitchen became too small. I opened the Tea & Toast Bar as the tasting room at our manufacturing space in Grants Pass.

Our offerings are unique, fresh and organic. Reflective of the seasons and representative of our thriving local food movement and our farming community. We sell our teas by the shot, the cup, loose, suspended in honey, brewed in jars and even served in a coconut. And our toast specials are hyper local, fresh & delicious!

We purchase 95 percent of our ingredients from Oregon companies: Oshala Farms, Pacific Botanicals, Mountain Rose Herbs, Organically Grown Company & Hummingbird Wholesale. We also grow some things ourselves. Many of our ingredients are internationally sourced and we are careful to purchase organically grown, fairly traded ingredients to ensure that farmers worldwide prosper. Our honey and farm direct ingredients are always sourced within the Rogue Valley, except our cranberries & sea salt which come from the Oregon coast. Working with likehearted Oregon companies is by far the coolest thing about being in business!

RVM: What is your best-selling tea?

Our best seller is surprisingly the product that tastes the worst! Traditionally called Fire Cider, it’s an organic apple cider vinegar that steeps 6 weeks with horseradish, ginger, citrus, hot peppers and a ton of herbs. It’s everybody’s grandmother’s recipe for wellness! Most often taken as a shot, it’s a powerful jolt for the body’s immune system and therefore super helpful in fighting off colds. A few years ago the term Fire Cider was trademarked by an east coast company and we were forced to change the name. So we now call it the PFC, the People’s (you-know-what). We serve it by the shot at our bar and sell it in pints and quarts also, it’s a great thing to have in the medicine cabinet.

RVM: Why open a tea shop?

Roundtable Tea Company is the result of a longtime dream that Sandra and her sister, Bev, shared. Reminiscent of family gathered around the table with a good cup of tea and delicious baked goods, they wished to offer this experience to others. Sandra’s sister passed away in early 2011, never having realized their dream. In her honor, and because of our love for tea and all it entails, we created the Roundtable Tea Company.

Our passion for tea and old world tradition is reflected in the careful selection of tea and preparation of food. We seek to satisfy a wide range of tastes so as to appeal to those discovering tea for the first time, as well as those who appreciate a high quality blend. For us, tea is not just a drink, it is a time to strengthen the relationship between friends and family. In many countries, the first cup of tea offered is to welcome a stranger as a guest. The second cup offered makes you a friend. If you are still around for the third cup, you’re family! We feel the same way about our customers.

Tea is the leaf of a tropical tree discovered in southern China over 6,000 years ago (before the pyramids were built). Recent archeology of the original tea trees have found the fossil record to indicate that this tree survived the last glacial age in southern China, which means that this leaf comes from the age of the dinosaurs. A sub species know as Assam’s were propagated by the British Empire and planted all over the world. Luxury Loose Leaf Tea is hand picked off the top of a hedged bush in a cluster of two leafs and a bud. Cheaper teas are grown in valley floors and machine cut. White tea is picked in spring and air dried before being shipped. Green tea is cooked in an iron wok but the leaf is kept green. Oolong in cooked until the leaf turns brown and is called ‘Dark Dargon.’ Black tea is fermented but all these teas can come from the same tea plant.

February 20 we are hosting our ‘Sweet Heart High Tea’ and tickets can be purchased at $25 per person by visiting the Tea Room. Our guest musicians are the quartet Lytning from Grants Pass.

We host parties like this usually on the third Saturday of each month, September to May.

Three Cups of Tea in the Rogue Valley: Dobra, Round Table Tea Co., and Uber Herbal Serve Tea in Style