Home»Feature»Those Who Cannot Just Do … Teach and Do: Barnstormers Theater Manager Wayd Drake Wears Many Hats, Onstage and Off
Feature 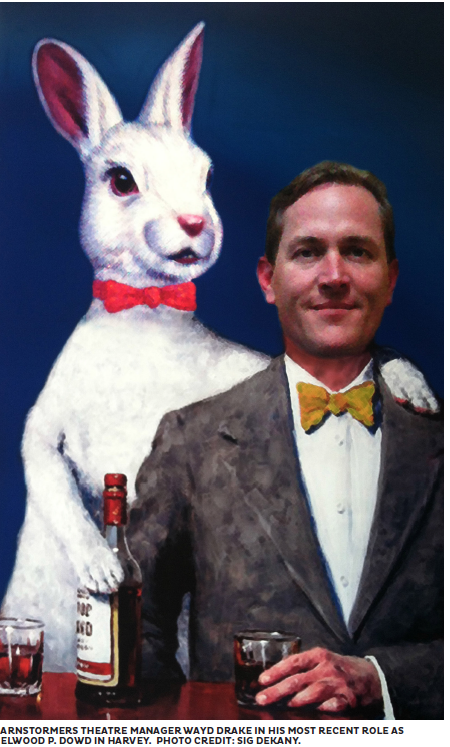 Wayd Drake runs no risk of being a teacher that is “just all talk.” For the past nine years, Drake has been a faculty instructor of Acting and Public Speaking at Rogue Community College—and what he teaches is constantly in view and in action, as he is the current Theater Manager at Barnstormers Theatre in Grants Pass, in addition to appearing in multiple plays.

“The two classes I teach are the scariest classes on campus,” he admits. “People don’t like getting up and talking in front of people. Jerry Seinfeld said that most people would rather be in the casket than giving the eulogy at a funeral. Most students wait until their last year to take the class. The concept of public speaking has been built up in people’s minds as scary. I try to offer good coaching and support. I am their biggest fan and their cheerleader. I want them to succeed.”

In addition to the task of changing students’ minds about public speaking, Drake took on the challenge of managing Barnstormers in 2014, an organization that boasts the title of the longest continuously running community theater in Oregon, though it needed a bit of a boost.

“The theater was on shaky ground, but adding concessions has helped, along with other things,” he says. “I want to stay there until it is running sustainably. I feel like I am making a difference on a bigger scale than one student at a time. I want to keep it being vital and vibrant for the next 63 years.”

Drake’s biggest goal is to set things up for the future and bring in more modern technology.

“We have gotten some good grants,” he says. “We just installed a new light board so we can use an LED light system. Our costume shop is crammed like Goodwill; I want to get a sewing machine and cutting table to make a real costume shop. I would like to get our marquee fixed, and many other little projects.”

Also in an effort to move forward, Drake also implemented the return of the summer melodrama (all five showings of Avarice in Ambrosia sold out last year), which was done by Barnstormers in Riverside Park back in the sixties.

“I’m trying to keep the historical aspect alive,” he says.

He says that they plan to offer more showings of the melodrama this summer, and they are committed to continuing their summer kids camp.

As for productions, Drake says that one of his favorite plays done during his tenure was Love List, which played over last Valentine’s Day, though he admits that he is biased. (He directed it.) Love List is a comedy in which two men discover that they can concoct the “perfect woman” by simply writing her attributes on a special paper.

“It is probably the most modern play we have done in a very, very long time,” he says. “It was a little edgy. Some people didn’t like it, but then we also picked up new season ticket holders.”

“It is a tough audience to try and read,” he adds.

For the remainder of this current season, he is looking forward to Urinetown the most, which opens on March 4, though he typically shies from musicals.

“It has a message to it, some thought in it, not just fluffy singing and dancing,” he says.