Home»News»These Boots Are Made for Protesting: Hiking To Stop A Pipeline in Its Tracks
News

These Boots Are Made for Protesting: Hiking To Stop A Pipeline in Its Tracks

Under sunny skies on Labor Day weekend, some of the “hikers” arrived in Shady Cove by raft, pushing across the Rogue River at a point where a proposed gas pipeline would cross the river—that is, if the activists don’t stop it first. About 200 people were there to greet them.

For the past month, a handful of activists have steadily been walking—and rafting, when required—from the California border to the coast of Oregon. Their path traces the 230 miles that a proposed pipeline will take if federal and state permits are issued later this year.

All told, the pipeline, proposed to carry liquefied natural gas (LNG), is slated to slice a 100 foot wide swath diagonally all the way from Coos Bay to the California border, passing north of Medford and landing just south of Klamath Falls. The pipeline would cross some 400 rivers and streams, and cut through old growth forests, as well as private land, as many as 700 private properties, and even, at one point, slice through the famous Pacific Crest Trail and would also demand an easement into the Winema National Forest, home to threatened species like the bull trout and various wild flowers—and an increasing number believe that the pipeline would leave a physical, philosophical and ecological scar on Oregon.

“My main concern is climate change,” explained Barry Peckham, who says that he grew up when President Eisenhower was promoting a federal highway system throughout the country. Peckham 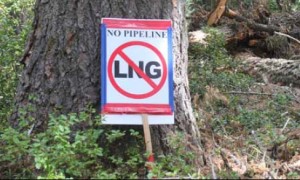 has joined the hike off and on, he says, walking some of the way and biking when his knee hurts too much. “This is the definition of insanity,” he continues, “you have a serious problem with climate change and you’re going to pump more greenhouse gases in the air. What are they thinking?”

At first, the primary intent for the pipeline was to provide gas for Californians, which although 90 percent of the consumption was slated for that state, cities in California repeatedly thwarted attempts to place a terminal for the gas tankers in that state’s costal cities. But, three years ago, as the controversial industry of fracking exploded in the Dakotas and central Canada, the project flipped from a pipeline to import liquefied natural gas to export gas. Both California and Washington have shut down efforts to place terminals there, as well as Canada, the host country to Veresen, the pipeline’s owning company. Many of the activists suspect that the pipeline owners saw the less populated southern Oregon as a “weak spot.”

But residents have been anything but compliant.

And, in late August, the Hike the Pipe started at the small town of Malin near the California border and about a half dozen hikers covered 55 miles over the next week to the point where the pipe would cross the Pacific Crest Trail. They are scheduled to conclude their hike on September 26 in Coos Bay.

There are immediate concerns that construction of the pipeline will disrupt old growth forests and its placement will interrupt migratory routes for various animals. As well, there is a pressing concern that leakage from the pipeline and energy used at the terminal near Coos Bay would constitute the largest source of green source gas emissions in the state after the Boardman Coal plant closes in 2020, producing as much as 2.1 million metric tons of carbon dioxide, according to its federal environmental impact statement.

Construction will require federal and state permits. The Federal Energy Regulatory Commission (FERC) has said it will put out its final environmental impact statement on the project at the end of September and then, after public comments and revisions, deliver final authorization by the end of December.

Concurrent to the federal permits, Veresen must secure permits from the Oregon Department of Environmental Quality in order to construct the pipeline that will potentially disrupt hundreds of waterways and migratory routes. Although Governor Kate Brown has not issued any public opposition to the pipeline, she has held strong environmental protections stances as a state legislator.

On Saturday, September 26, the hikes will arrive in Coos Bay. Details about location and time will be posted at RogueClimate.org.

These Boots Are Made for Protesting: Hiking To Stop A Pipeline in Its Tracks