The Wisdom of Crowds: Tow’rs Wants You to Not Just See, But Join the Music 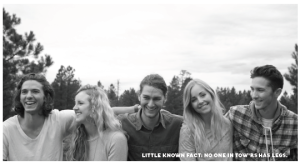 The first thing one might think upon seeing a flyer for Arizona indie-folk band Tow’rs, who will be playing at Club 66 with Black Bear’s Fire on Tue, March 15, is ‘whaaa?’ But don’t worry; the band gets it.

“It’s just Towers, like the with an e. But we spell it the old Shakespearean way with the apostrophe,” says guitarist Kyle Miller.”

Kyle and Gretta Miller, the co-founders of the group, say they were reading a lot of old literature and poetry and were drawn to the old spelling aesthetically, but that there is also a deeper meaning for them.

“We hope that our art and our music, creates a place for community to happen, something bigger than just the songs themselves,” says Kyle. “The tower is imagery for that, a roadmark along all our journeys.”

And sometimes that journey is complicated. Kyle and Gretta are a married couple, and that means bringing not just the complications of a romantic relationship into a creative partnership, but then filling it out with a backing band.

“Working on songs with my wife, it feels like an extension of our marriage, because they’re both raw and vulnerable,” says Kyle. “It’s something we haven’t totally figured out yet, but we’re getting better and better at. And I think it’s developing better art.”

“It’s really for us, like a processing tool to help our relationship,” says Kyle. “It’s not awkward or weird, but it definitely happens.”

But then there’s also the cello, electric guitar, drums and trumpet getting brought into every Fleetwood Mac moment. But Tow’rs has found a way to make it work.

“One of the reasons it works well for our music, is everyone really loves the piece that they bring,” says Kyle. “It’s a piece that they themselves bring, and no one else could. That dynamic can be really messy. We have had some arguments.”

But from those arguments came growth. Tow’rs first, self-titled album in 2014, was a collection of folky strummers dressed up with a few guest appearances from friends. It’s 2015 follow-up, The Great Minimum, really broadened the band’s sound by making those friends part of the writing process. Instead of adding a lead or a drum part, they became essential parts of the composition process, moving the band away from Old Crow Medicine show territory and towards the Arcade Fire or Typhoon. A solid move.

But for its live shows, Tow’rs likes to make the band even bigger.

“The crowd is just as much a piece of the art as the band,” says Gretta. “We want them to come be a part of the music.”

The Wisdom of Crowds: Tow’rs Wants You to Not Just See, But Join the Music