The Will to Preserve: A Call to Save America’s Gorgeous Environment 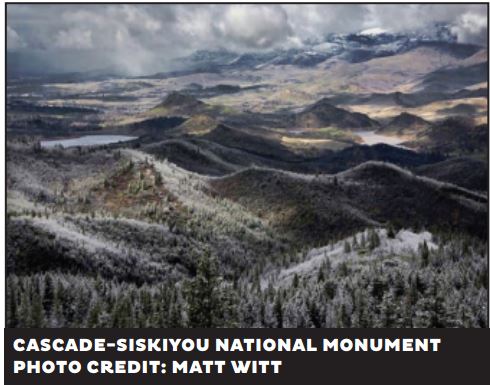 The luminescent cavern of Nevada’s Basin and Range National Monument viewed from the precipice. A vivid and vibrant creek that is part of the vast Berryessa Snow Mountain National Monument in Northern California. The snow dusted and silent mountains of our very own Cascade-Siskiyou National Monument. These breathtaking images and more are under threat of the bulldozer.

Under the reign of Emperor Trump, The Department of Interior is going to re-evaluate the status of 22 national land monuments and five marine monuments. In these trying times, the responsibility must be placed on the constituents to raise their voice and proclaim that our natural world is worth more than any coin, shekel, or deal. A group of photographers that were alarmed by these prospects set out to combat this possible destruction by putting together the free e-book Land Almost Lost, available for viewing and downloading at landalmostlost.com. The last date that one can make their voice heard regarding the Bears Ears National Monument was May 26, 2017, and the last date for all other monuments is July 10. The link to where one can publicly declare resistance to this potential demolition is available on page nine of this e-book, as well as info on how to find and contact one’s representatives and senators. Even if it might seem futile, it’s well worth the fight.

Land Almost Lost came to fruition when a group of ten photographers coalesced years of photography together with personal forewords to create an aesthetically sublime call to arms, urging the American people to stand against deforestation and deracination. Images of these monuments create a sense of awe and actuality, manifesting in organic desires to sustain the terrain that gives us beauty, and the soil that gives us life. Another element of these monuments that becomes instinctively clear, is how diverse and distinct they are according to which part of the nation they are located. What’s baffling about this is that many of the states that contain these spectacles have already suffered plenty from the concrete plague of urbanization, and yet these remarkable stretches of Earth and her landforms are still under threat of annihilation. Regarding these hominid subjugations, featured photographer Kevin Ebi places his clarion call near the beginning of the book.

“While the forest along the Twin Falls trail today is beautiful, it is a mere shadow of the one that grew here more than 100 years ago,” Ebi writes. “Where there were once giant cedars standing as sentinels of a diverse forest, today’s trees are more skinny and uniform. After all, they all took root at the same time after the old-growth trees were methodically removed. And what happened at Twin Falls was repeated nearly everywhere. In my state, the only place to experience a forest that’s at all reminiscent of what the first modern settlers saw is a national park. I understand we can’t save 100% of everything. But we also shouldn’t settle for saving 0%. And that seems to be the direction we are heading.”

Imagine for a second, what our sovereign land would look like if every patch of forest and desert was proselytized to this new world religion of metropolitanism. Dystopian novels will immediately come to mind, tales of the maladjusted and sick societies of Orwell, Huxley, and Bradbury. The salient difference here is that these worlds are fictional, while what we’re facing is inescapable reality. One may harp on the prophetic nature of these dystopian works, to the point of this comparison being rather hackneyed, but it is necessary to do so in order to highlight the inhumanity and illness that a people must be inculcated into in order to embrace this earthly carnage. Our heritage is being erased around us as we speak, in the name of progress and evolution, when what we’re really experiencing is an involution of the highest degree. One who considers themselves a “reformer” must stand tall against revisionism and call subversion by its name, or else they are acting precisely in the manner that the “system” they claim to despise wants them to act. The first step we must take towards enacting change is spreading knowledge.

“I believe more people need to know about these wonders in order to save them,” writes photographer Tom Till. “The fact that they have been put on the chopping block without more of an outcry is shameful. The good news is there is still time to act. But that time is running out. Call your elected representatives now and demand that these irreplaceable American treasures be saved.”

The Will to Preserve: A Call to Save America’s Gorgeous Environment