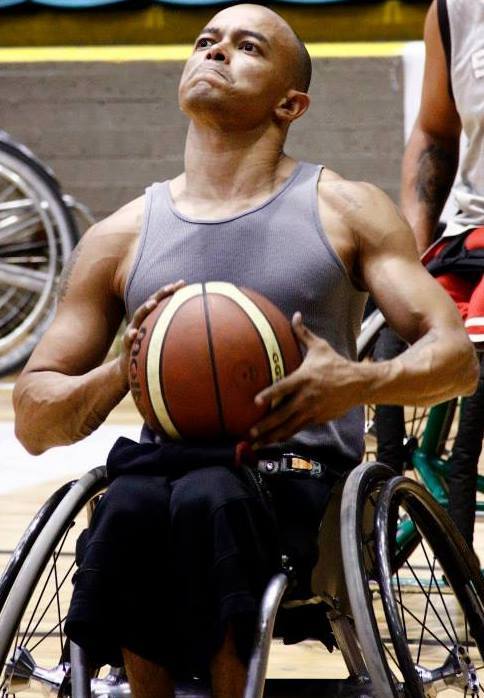 “Gotta be quick,” yells out Tyron Griner, a captain for the Rogue Valley Scorpions. And, like a patter, he keeps calling out the encouragements. “Go.”

It is a recent Tuesday afternoon and six men in their mid-20s to mid-40s—the core squad for the Rogue Valley Scorpions—are meticulously running basketball drills. It isn’t unlike any other pickup game, a mix of ages and ethnicities all gathered around a similar love. It is loud with laughter and good natured trash talking and the sound of players calling out to each other. But unlike the other dozens of pick-up basketball games in gyms and parks around southern Oregon, what is different is all six players here have varying disabilities that have placed each in a wheelchair.

The gym is as big as an airplane hanger, and banners for Rogue Credit Union and State Farm hang on the walls. Two bleachers on the gym’s east side are empty except the players’ collection of gym bags, and a few spare parts for their wheelchairs; another two bleachers on the opposite side are folded up.

After running one play, the players line back up, maneuvering their wheelchairs around the key. One of their captains, Keith Avant takes the ball and drives towards the basket, and then stops on a dime, his wheels squeaking sharply on the floor. Avant has lanky arms and he gracefully arcs the ball over a defender. The ball lands smoothly in another player’s lap.

“Shoot the jump shot,” yells out Griner, a somewhat confusing commanding considering all the players are seated and one of the more challenging aspects of wheelchair basketball is shooting a ball from a seated position. The player, wearing a headband and gold chains, loads up and banks the shot in.

Like the NBA, regulation games for wheelchair basketball are five-on-five, with most of the same rules. There are obvious differences, though: Traveling is not measured by steps, but a player must dribble after two touches on his wheels, and each player is rated by his ability, from 1.0 to 5.0; the total for any team on the floor cannot exceed 15.0.

Started by young men returning injured from World War II, the game has found a resounding relevancy in the past 15 years, as the ongoing wars in Iraq and Afghanistan have pushed up the numbers of men and women in wheelchairs to numbers far exceeding those in the years previous to 2001. (On Saturday, December 17, the Scorpions will host the San Diego Wolfpack, many of whose players were injured in military action.) Over the decades, the sport also has expanded far beyond war vets to include those injured in ski and motorcycle accidents, as well as those born with disabilities like spinal bifida. Avant points out that one of their players suffers from what he calls brittle bone disease. “He is currently out with a broken bone,” says Avant stonefaced.

Another player on the Scorpions—one of their stand-out stars—is Josh Brewer; he is a 1.0. Growing up in Ethiopia, he was run over by a train and lost an arm and both legs. He was adopted by a family in Battlefield, Washington and has taken to adaptive sports with amazingly proficiency. Spinning and pivoting his wheelchair, he holds the ball in one hand, propelling his wheelchair wheels with his other arm, which is amputated at the elbow. Brewer weaves through defenders as easy as Allen Iverson in his heyday. This past summer, Brewer played for the U.S. chair rugby team at the Rio Olympics.

All told, from club to Olympic level, it is estimated there are 100,000 wheelchair basketball players worldwide, a number greater than Medford and Ashland’s combined populations. There are dozens of college teams, as well as both a men and women’s national league. The Scorpions formed as a team only a year ago, but quickly have moved to the top of the rankings. They are one of the few teams in the National Wheelchair Basketball Association not directly sponsored by a NBA team. At last year’s national champions, the Dallas Maverick team placed first and the Milwaukee Bucks second. The Scorpions placed an impressive fourth—and Avant is confident they can do even better this year.

“Communication, understanding each others’ disabilities,” says Avant, about what qualities make a good team—and the very qualities he sees in the Scorpions. Avant wears two black arm bands that cover from his wrists to half-way up his bicep, mostly covering a black ink tattoo. He has light blue eyes and wears a headband that pushes his ears out. He is simultaneously easygoing, but intense. “Somebody who would be good at (wheelchair basketball) would be a good chess player,” he adds.

Avant goes on to explain that he has helped recruit many of the players to Medford, and during the first two years as a team, they have dedicated themselves to more than just playing basketball. “We’re trying to make a change in this community,” he assets, explaining that school districts don’t have the resources to work with children who have physical disabilities. “There are so many opportunities (for a teen with disabilities),” he says, “as many a football player to get into college.” He goes on, “we are all about motivating the youth.”

The Scorpions plan to add youth and women leagues in the near future.