The True Sizzle of Burlesque: Local Performer Kat Wondergloom Knows How to Sparkle 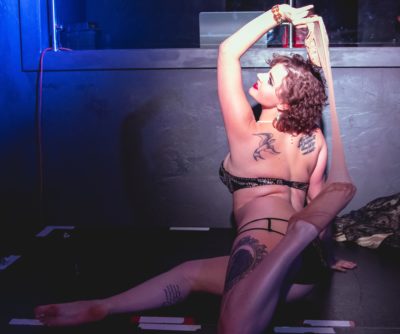 Burlesque isn’t a just a tassel loving bump and grind where women shed their clothing. Burlesque today pushes the edges of physically rigorous dance and provocative performance. And it continues to reinvent itself against the American backdrop of taboo and puritanical values. It’s the expression of sexuality, an homage to the body beautiful that gives us pause to remember that we are all in fact, sexual beings.

The word burlesque comes from the Italian burlesco or burla, which means a joke, a mockery or a tease. And it’s probably the definition of tease where burlesque has most found a home. Teasing in the sense of burlesque is the dance of flirting, the enlivening of want. It is the art of suggestiveness and promise. In other words, burlesque is nothing short of selling magic.

A merging of vaudeville and striptease, burlesque became popular in the early 1900s with mostly women finding their way to the stage with a unique brand of dance that included the slow unveiling of skin. Ziegfeld’s famous Follies elevated the art form with strategically placed feathers and a crowning of rhinestones, turning the showgirl into the epitome of glamour

Recently I caught up with Oregon burlesque performer, Kat Wondergloom. (Yes, the name is her creation.) She’d wanted something that combined a sense of whimsy and darkness, and I imagine that her career in burlesque is a combination of both. It didn’t take long for Ms. Wondergloom to captivate my heart and imagination. Her story begins when she is inspired by a Dita Von Teese performance. (Google her!) So how to begin? For Kat, it was watching You Tube videos of burlesque dancers, imitating them and practicing.

The thing that helped her the most, she told me, was being adopted by a group of drag queens. “They taught me everything about hair, make-up and costuming. The costuming is all about the glamor and the glitz,” she told me. “A lot of burlesque performers make their own costumes. You start with a good basic lingerie and then add rhinestones to everything.” Wondergloom prefers to call herself a burlesque performer rather that a burlesque dancer, because she has no formal training.

As we talked about costumes, I asked her if there was a difference between burlesque and strip tease. “The difference,” she laughed, “is a lot more glitter and a lot less money.”

In this darkly intriguing culture of ceremonial sexuality, I asked her if she felt safe when she performed.

“I make my living in bars, but I feel like the owners have my back. There’s a bouncer and an M.C. who always announces the rules—that you can’t touch the girls. I mean there’s always some guy who’s going to try and grab your ass, but then there’s someone right there to protect you.”

It’s an interesting juxtaposition to a more polite environment where highly paid actresses fear for their dignity and their safety far more than a burlesque performer who makes her living in clubs where there are actual rules that the patrons are expected to follow.

“I’m able to express myself creatively and sexually. Women, even in 2017 aren’t really allowed to be sexual,” Wondergloom says, a statement underscored by the tsunami of recent and very public sexual harassment allegations that have nothing to do with women expressing their sexuality, and everything to do with women being seen as sexual objects.

In 2015, Kat Wondergloom was voted as the Rogue Valley’s Best Performing Artist.  She describes her act as a combination of kitschy and kinky, with a little bit of cheesecake charm. And charming she is. “Being a burlesque performer has given me confidence,” she says. And I’m confident that she has captured the essence of the tease in this alluring and continually morphing art form.

The True Sizzle of Burlesque: Local Performer Kat Wondergloom Knows How to Sparkle