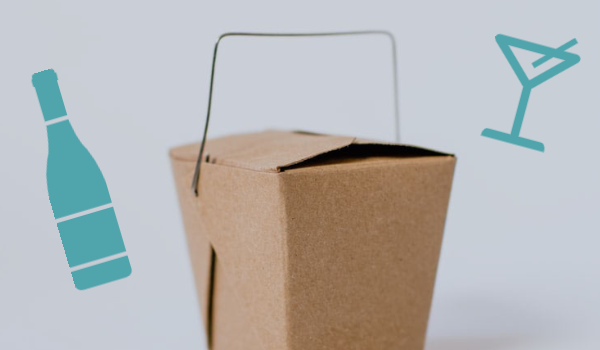 The COVID-19 pandemic has resulted in many changes this year, both good and bad. Greenhouse gases have been on the decline since 3,400-pound roadsters and cars have stayed in their garage. There was also the sensational story about Venitian dolphins returning to the river. However, as many as 145,000 Americans have died because of the virus and infection rates are still likely to rise until a vaccine is developed.

To combat this, restaurants and businesses have worked hard to limit the spread of this infection. One of the better options was the state’s agreement to allow the home delivery of alcohol, including wine, beer, and spirits.

As countless restaurants transitioned to take-out and delivery options in the face of the pandemic, many states loosened laws on alcohol delivery. Before the novel coronavirus hit, alcoholic beverages, including mixed drinks and beers, had to be drunk on the restaurant’s property. But with wine and liquor making up some 30% of restaurant sales throughout the country, it was unrealistic for bars to prevent their patrons from indulging in their favorite drinks.

As such, the State Liquor Authority in New York allowed restaurants and bars to sell alcoholic beverages along with food purchases. Many other states, including Oregon, followed suit to help bolster the struggling economy. Oregon already allowed some home deliveries of spirits, but same-day delivery options were limited and only to those who had the proper licensing.

“They’ve relaxed a lot of laws, and quickly, in light of the potential economic harm to thousands of businesses and millions of employees,” explains Art Decelle, the senior counsel at Lehrman Beverage Law in an interview with Eater. “And it’s appropriate that they help people stay afloat in a very uncertain period.”

It makes sense as to why liquor deliveries have been prohibited in the past, especially since the identification of persons over the age of 21 can be difficult to verify when orders are placed virtually. Additionally, alcohol is one of the leading causes of car accidents. As many as 379 fatal crashes occurred in Ohio because of impaired driving in 2017 alone.

Unfortunately, many locally-owned and operated restaurants throughout the United States have had to close their doors as a result of the virus. According to a recent report by Yelp, as many as 23,981 restaurants have experienced some form of closure because of the COVID-19 pandemic. While some were able to pick up the pieces following the temporary shutdown, as many as 53% of affected restaurants have had to close down for good. A company’s security and record keeping are among the top five issues facing business owners, but few had a back-up plan in place for an event such as a global pandemic.

Local events have also taken a hit. Even the beloved Oregon Wine Experience has moved to a virtual experience this year to keep the community safe.

According to new reports, the Oregon Liquor Control Commission has met to discuss alcohol delivery for the long-term. The commission engaged in a virtual meeting with city leaders, health officials, and even local distillery and restaurant owners to talk about continuing take-out alcohol options.

While no decisions have been made so far, the commission also wants to hear from the public on the matter. The next meeting is scheduled to take place on August 20.