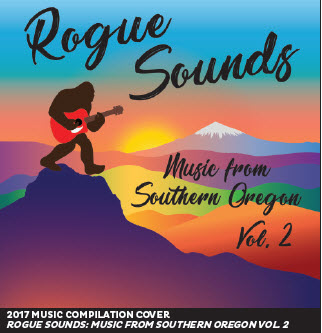 I fell in love with compilations when I was 17. My parents owned a small rental house, and one of the tenants that vacated it left behind a basket full of tapes and CDs. One of them was a compilation from Fat Wreck Chords, a small Bay Area record label. From the very first listen, every band on it was my new favorite.

It wasn’t that I’d never heard different bands on the same collection. Film soundtracks and mixtapes were a thing. As were those 40 greatest hits of the fill-in-the-blank albums they sold on TV.

But compilations were different. You didn’t listen to them for the studiously crafted emotional narrative, or for the cliff-notes of a decade or a genre that had fallen out of vogue. You listened to them to discover what was new, different, and life-changing. Their appeal was optimism and curiosity instead of nostalgia, and getting a new one was like having someone mark a series of Xs for you on a treasure map, revealing the secret gems scattered anonymously throughout the wilderness, and for a band to be included on one was like being inducted into that particular hall of fame or being knighted by the scene queen, a way of a voice of cultural authority saying, “this matters.”

And sure enough, the bands on that compilation went on to matter quite a lot.

I was working as a music reporter in Boise when the city went from being Nowheresville U.S.A., to one of the most important music hubs in the west. It’s hard to pinpoint exactly when it happened, because there were a lot of factors at play: affordable housing, a younging population, numerous available performance venues, strong support from local city institutions, and passionately committed music fans.

But it’s pretty easy to pinpoint when the local music community understood that’s what was happening. It was a local blog’s compilation of Boise bands, The C.O.T. Mixtape, which included dozens of tracks from groups almost no one had ever heard outside of their friend circles. Suddenly, everyone was listening.

And just like that first compilation I found when I was 17, the tracks were a collection of the city’s new favorite bands. Several were showcasing at SXSW by the end of the year. One of them, Youth Lagoon, went on to play most of the major American music festivals, do several world tours, and become a cultural ambassador for the local music scene and the city as a whole.

The reason why is that it gave fans and musicians alike an artifact of their still underground culture, something in the physical world that turned the ephemeral nature of music concrete, something they could show to people and share and shake in the face of the show-skipping non-believers and shout, “this is real.”

That was our goal at The Messenger when we launched our local compilation series last year.

It was no secret that there is a wealth of talent in the Rogue Valley. But as a community, a scene, it remains as fractured as our sprawling network of municipalities. Bands don’t work together across city lines, venues don’t promote or recruit local talent, and everyone is allergic to marketing. We wanted to follow what I call the Field of Dreams theory of artistic development (seeding activity by creating space for it to happen), and creating an artifact that brought the scene together and made it real, instead of alleged, and that gave local artists a benchmark to strive for.

Our first compilation, South of Portland: Music From the Rogue Valley, had 12 songs curated directly from our local music review column, Rogue Sounds. Since it was the first effort, and something of an experiment, that curation was a means of ensuring it would stay on track rather than fizzle from no one knowing what it was yet. We made several hundred copies and gave them away free at the door to everyone that came to the launch party at Brickroom, with four of the band featured on the CD. We could have made more, but we wanted something slightly exclusive, that you had to show up and participate for, so that it would be appreciated fully instead of lost in the noise.

The show sold out, and almost everyone that attended left buoyant, armed with a roster of new favorite bands they could bring up to torpedo anyone claiming that there wasn’t any good local music.

This year, we again reached out to groups featured in Rogue Sounds for some of our favorite tracks of the year, but also solicited and accepted open submissions from any artists based in our coverage area of songs recorded in 2016 or 2017.

As the curator, I had trepidations. Naysaying friends had claimed more than once to me that the compilation was a lucky fluke, that a new collection every year wouldn’t be sustainable because there wasn’t a deep enough bench of talent.

I thought they were wrong, but had no idea how wrong they were.

We received more than a hundred tracks, most from artists that hadn’t been featured in Rogue Sounds, and far more than we could fit on the CD. It is literally so packed that I wrote to one band and asked if they could send me a shorter song so that we could fit them on.

In the end, 21 songs made the cut, from bands all over the valley and styles ranging from rock to ragtime. There are protest anthems, love songs, dance grooces, headbangers, and the no-shit “song of the summer,” about life lived breathing forest fire smoke.

And there’s only way to get it: show up to the launch party at Talent Club on Friday, Dec. 8 and take part in your local music scene. As this compilation makes crystal clear, if you don’t, you are missing out on something real and vital that is only available for this one night in this very special place that we call home.

$10 (tickets available in advance via MercTickets.com or by becoming a supporting member of the Messenger) 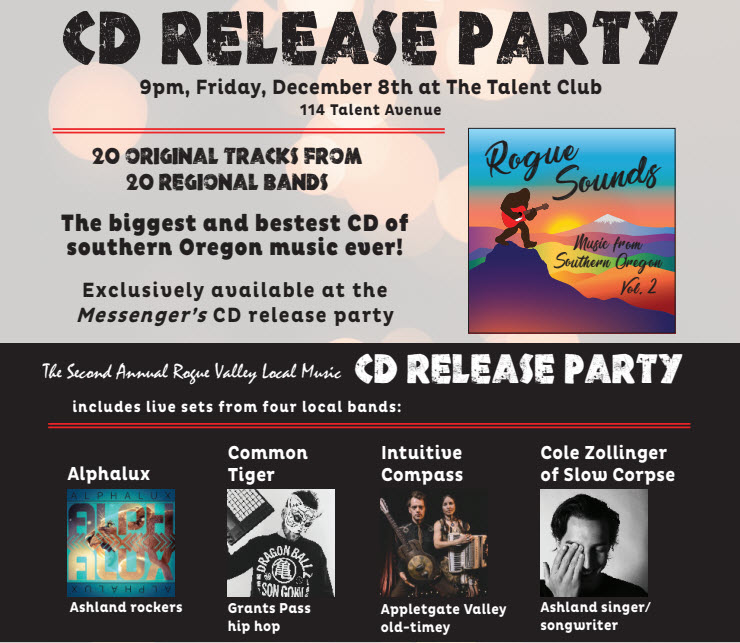