The Six Trimmers You’ll Meet at Every Pot Farm 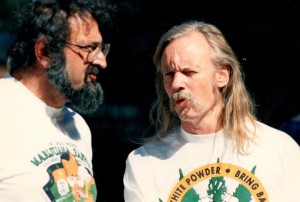 At roughly $200 for a pound of trimmed marijuana, it’s no wonder why people flock to our area from all over the country to take advantage of “the harvest.” Much like the migrant workers of the 1950’s, Trimmigrants, as they’re called, travel from farm to farm (or basement to basement), to earn their autumn living trimming marijuana. For many people adapted to seasonal work, trimming marijuana can be a great way to make a lot of money in a relatively short amount of time. It isn’t however, good and green all the time. Trimming requires a lot of patience and practice, and the fact of the matter is, it’s not for everyone; this industry demands a certain kind of person. It takes someone who doesn’t mind sitting for hours on end (how does twelve sound?), in cramped quarters, with complete strangers, in a quasi-legal industry. But if you’re reading this now and are thinking, “I could do that,” then it might be helpful to know who you’ll be working with.

The  Forgetful Genius – Undoubtedly the smartest trimmer at the table. They know everything there is to know about marijuana – period. They can tell you how long marijuana has been on planet Earth, what ancient civilizations cultivated it, what year the plant was made illegal in the U.S., and by whom, and for what reasons. They are well aware that THC is just one of the known 483 compounds in marijuana and are prepared to tell you all about the other 482. They are well versed in CBDs, CBNs, CBGs, and a multitude of other acronyms you never knew existed. They understand the neurological effects that marijuana has and can clearly describe how THC affects the activation of the anterior cingulate cortex in the brain. Also, The Forgetful Genius has been working this particular trim scene for six weeks and still can’t remember a single person’s name and has lost their trim scissors more than a dozen times.

The Paranoid Schizophrenic – This person is often the one in charge of handling the money. He walks around, a LOT, and to try and pin him down in any one place for longer than 30 seconds requires extensive planning. He is a talkative fellow but doesn’t necessarily talk to anyone in particular. He is often seen mumbling to himself while walking in random directions. Any observant trimmer can clearly see that this guy is likely on a number of prescription drugs, though may or may not be currently taking them. He is a sensitive man with an eclectic range of emotions from warm and fuzzy to bat-shit crazy; pick-up truck engines are often mistaken for federal helicopters.

The Weed Shaman – Fresh off the Rainbow Tribe circuit, this girl has spent her entire morning lying under the pot plants praying to them. If she hears you call your bud ‘weed’ she will remind you that it is in fact ‘medicine.’ While other people trim, The Weed Shaman will sing icaros that she learned in the Amazon Basin on holiday. It is not uncommon for her to take on the task of juicing the marijuana leaves. Eventually, she will have slept with at least four of her fellow trimmers.

The Master Trimmer – The self-proclaimed Fastest Trimmer in the Pacific Northwest. The Master Trimmer has been to every trim scene in the Emerald Triangle and is going to tell you about every single one them. They know the best way to trim a bud and will not shy away from telling you why their trimming is far superior to yours. Surprisingly, their trimmed buds are not actually that good, despite the fact that they are quick to snatch the best branches off the table. You catch them on multiple occasions stuffing decent size nugs into already bloated pockets. It does not take long to notice that there is evident tension between The Master Trimmer and the Paranoid Schizophrenic.

The Old Guy – A devout fan of Jerry Garcia, the Old Guy will spend hours telling you all about how it used to be. He’s got so many amazing stories that you can’t help but wonder why the hell he’s trimming in such shitty conditions with all these weirdos and for all these years. He can name every Phish concert he’s been to along with the lyrics of any Pink Floyd song. Eventually, he will hit on you, and it will be uncomfortable.

The High Guy – Ever want to know forty different ways to get high? Well, this guy is currently trying them all out simultaneously. He has eaten four cookies, taken six knife hits, ripped the bong half a dozen times, and still isn’t high. He’s moved on from dabs to globs. He can’t remember how long he’s been at this trim scene, but he doesn’t suspect he’ll be leaving anytime soon. In fact, he’s so busy trying to get high that the only thing he’s actually trimmed is the end of his shirt.

Mike started writing in elementary school and never looked back, though is still not a big fan of cursive. He got his first big break when he was picked up by the Elko Daily Free Press as a freelance writer during his two year-long hitchhiking stint from Nevada to Argentina. He currently lives in Ashland.

The Six Trimmers You’ll Meet at Every Pot Farm