Home»Feature»The Rogue Conquered: The King of the Rogue Competition has 2028 Olympics in its Sights
Feature

The Rogue Conquered: The King of the Rogue Competition has 2028 Olympics in its Sights 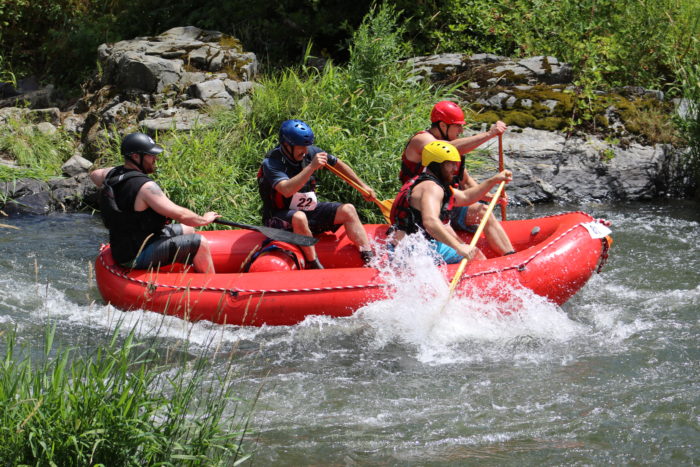 On a sunny, albeit smoky day, kayakers, rafters, and paddle boarders work hard, though they’re not all staying dry. Spectators gather to watch them flip over into the whitewater, soar through rapids, and work as a team.

In its sixth year, the King of the Rogue whitewater rafting competition will take place Saturday, August 18. It was originally founded to bring awareness to constructing a whitewater park in Gold Hill, and while that’s still the focal point, the competition has become a popular event in the Rogue Valley.

Steve Kiesling, who is part of the Gold Hill Whitewater Center and has an impressive rowing and rafting history, says, “The engineering is done for the park and we’re finally in the permitting, fundraising stage. It’s an Olympic class park and now we’re hoping to bring the whitewater events here from the 2028 Olympics in Los Angeles.” (Kiesling is a former Olympic rower and wrote The Shell Game, an iconic book about the sport published decades before the best-selling Boys in the Boat.)

The ultimate goal––along with building a whitewater course in Gold Hill––is to build a course tough enough for the 2028 Olympics. The Olympics that year are scheduled to take place in Los Angeles, yet the city is devoid of whitewater. Mapping the bottom of the river by Ti’lomikh Falls began in Nov. 2013. A grant provided by the Oregon Community Foundation made this research possible, and since then other state grants managed by Rogue Valley Council of Governments continued research as well as remove the Gold Hill Diversion Dam. In 2016 research was conducted to ensure that fish are able to safely traverse through the rushing water.

Andy Baxter, who is on the board at the Gold Hill Whitewater Center and past participant in King of the Rogue, says the event is “certainly a lot of fun.” He hopes the competition brings “awareness to the region the excellent whitewater qualities we have right here. It’s a world class site.” Kiesling and Baxter both trained for the 2008 Olympics as rowers. “We’ve trained and raced all over the world,” he says, “and in terms in the US, this is one of the best centers for whitewater rafting.”

As opposed to other whitewater centers in the country, most of them are manmade. The Gold Hill run, however, is natural whitewater rafters and kayakers from all over come to traverse. Last year the competition saw around 75 participants. “Being the Overall King or Queen of the Rogue is a big deal,” says Kiesling. “That person has the most points for [a] four person raft, kayak, or Stand Up Paddleboard—so that person is the top overall boater in the ultimate whitewater challenge.”

While the winner with the most points isn’t awarded money for earning the most points, he or she is given a medal with a well-deserved and much respected title. However, if a competitor  can win 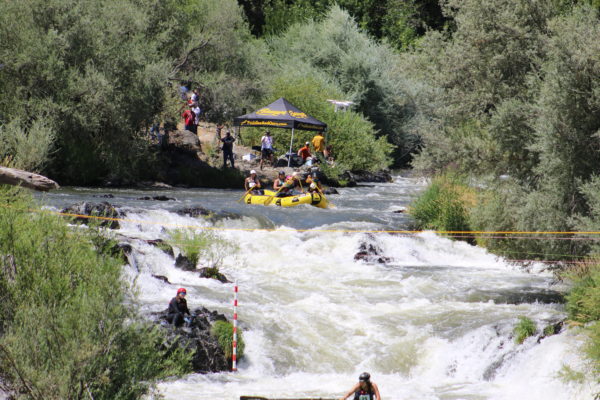 $1,000 if he or she successfully finishes the Crazy Pete Sup Challenge. This challenge requires a clean run without any falls or complications on the three runs with an adequate video recording device to document their runs for an official review.

“It’s called the Ultimate Whitewater Challenge for good reason,” Kiesling says. “It was designed by an Olympic gold medalist. Not only are there Class IV rapids but you have to paddle upstream and carry your boat through two portages. So the event tests all kinds of whitewater skills as well as fitness and speed on land.” Race categories include a four person raft, a one person kayak, an inflatable kayak, a Stand Up Paddleboard, and a one person raft.”

Baxter says there are technical and physical aspects that make this competition difficult. “It’s pretty massive because you’re going full speed and your rafts are pretty heavy, and you’re running as a team and that’s pretty difficult.” Above all, his favorite part is working as a team.

All three chutes into the river are slippery, rocky, and soggy, adding more challenges to the competitors. “It’s a lot less painful to watch,” Baxter says. “You’ve got your sprint at the top, you’ve got the technical whitewater, then you have some gates as well. They can be very tricky. One of the interesting things about rafting as a team sport is it doesn’t have to be a secular one person in a boat kind of thing.” However, last year the event saw more single-person participants.

Due to hazardous smoke conditions last year the event was postponed, though the planned date ended up being a clear day. Kiesling says they’re holding it on the predetermined date regardless of smoke conditions this year. “I think in terms of the draw people are anticipating really heavy smoke,” Baxter says, although he remains hopeful that the day will be clear and smoke-free.

“It’s fun to watch because there are really great boaters and also a fair amount of carnage (rafts flipping, etc.),” Kiesling says. “We also have a Riverwalk Marketplace with fabulous food trucks and drinks. It’s a great day at the river even if you don’t compete.” Spectators and participants who have attended in the past would agree, and are looking forward to Aug. 18 with excitement to watch rafters work through the rapids, whether that means they’ll make it through dry or drenched.

King of the Rogue

The Rogue Conquered: The King of the Rogue Competition has 2028 Olympics in its Sights