Home»Culture»The Recipe Behind the Author: A Q&A with Ellie Alexander
Culture

The Recipe Behind the Author: A Q&A with Ellie Alexander 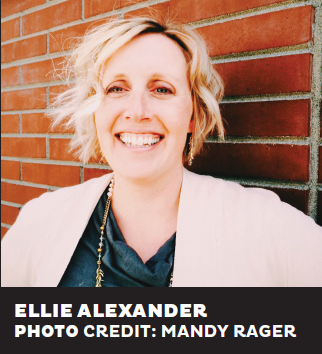 The perfect recipe: a deep love for baking and a fascination of mysteries at an early age. This culinary masterpiece is Ellie Alexander’s new book, Caught Bread Handed, fresh out of the oven June 28, and is the fourth installment of her “Bakeshop Mystery” series. Hungry for more? Check out our Q&A with her, or ask your own questions on July 1 at her book signing at Barnes and Noble in Medford.

Rogue Valley Messenger: With the release of the next book in this mystery series, what challenges is Julie (the main character) going to face next?

Ellie Alexander: After spending a long weekend at Lake of the Woods catering a private retreat, Jules is back in Ashland. It’s late winter in Ashland so everyone in town is enjoying a slower pace before the start of the new season at OSF. Jules and her team at Torte, the family bakeshop that she helps run, have taken on extra wholesale bread orders as an additional revenue stream during the offseason. She’s up to her elbows in bread dough and has an extra cook—her sexy but estranged Spanish husband, Carlos—in the kitchen. Managing rows and rows of sourdough is nothing compared with trying to maintain her composure as Carlos whips up sultry tapas and tries to win her back. To complicate matters, a chain restaurant, ShakesBurgers, has moved in across the plaza from Torte. The owner of ShakesBurgers, Mindy Nolan, has torn down the Tudor façade and replaced it with gaudy neon and green signage and a sleek, ultra-modern design. No one in Ashland’s tightknit business community is happy with Mindy, but she’s giving Jules the hard sell to produce all of the restaurant’s buns. Torte could use the extra cash, but Jules doesn’t want to make a deal with public enemy number one. However when she finds Mindy murdered she’s suddenly in the mix with a killer.

RVM: Why are the books set in Ashland, Oregon?

EA: I think Ashland is the perfect setting for a mystery. I grew up reading mysteries set in quaint villages in the English countryside, and Ashland has a touch of that vibe with its whimsical nod to Elizabethan architecture and witty Shakespearean-inspired shops and storefronts. Someone once described Ashland as Disneyland for theater lovers which I think sums it up nicely.

RVM: What was your major inspiration in pairing baking with fiction?

EA: Food has always been a love language for me. My earliest memories are of food. My mom was a traditional home baker. She believed you should always eat dessert first and never made anything from a box. My dad would spend hours on the weekends crafting an eight layer torte with mocha buttercream and fresh apricot preserves. Food is a point of connection. If you’re not running to the kitchen to grab something sweet to nosh on while you’re reading then I haven’t succeeded.

RVM: Who or what your major cooking/baking influences that you include in your stories?

EA: I’ve been very fortunate to connect with professional pastry chefs who have given me so much material to weave into the books and even a few ways to bump someone off in a commercial kitchen. Kristina Cortez-Marchessault with Tier Catering is my pastry muse. She is an incredible artist. Her cakes, pastries, and macaroons look like something you might find in an art gallery.

RVM: Do you have other forms of fiction that’s not a part of this series but is also a pairing between story and baking?

EA: For sure! Food is a part of so many stories whether we realize it or not. Three of my favorite fictional foods are butterbeer from Harry Potter, Turkish delight from The Lion, the Witch and the Wardrobe, and molasses snow candy from Little House on the Prairie. I wanted to try all three after reading delicious descriptions of them.

RVM: What’s your favorite recipe to bake that you might have incorporated into one of your stores?

EA: My mom’s Raspberry Danish. It’s featured in the first book in the series, Meet Your Baker. I remember my mom baking it on Saturday mornings while my brother and I would watch cartoons. It felt like it took hours and hours to bake.

The Recipe Behind the Author: A Q&A with Ellie Alexander