The Prodigal Non-Gendered Child Returns: Trannysaurus Rox is a Real Life Hedwig and the Angry Inch 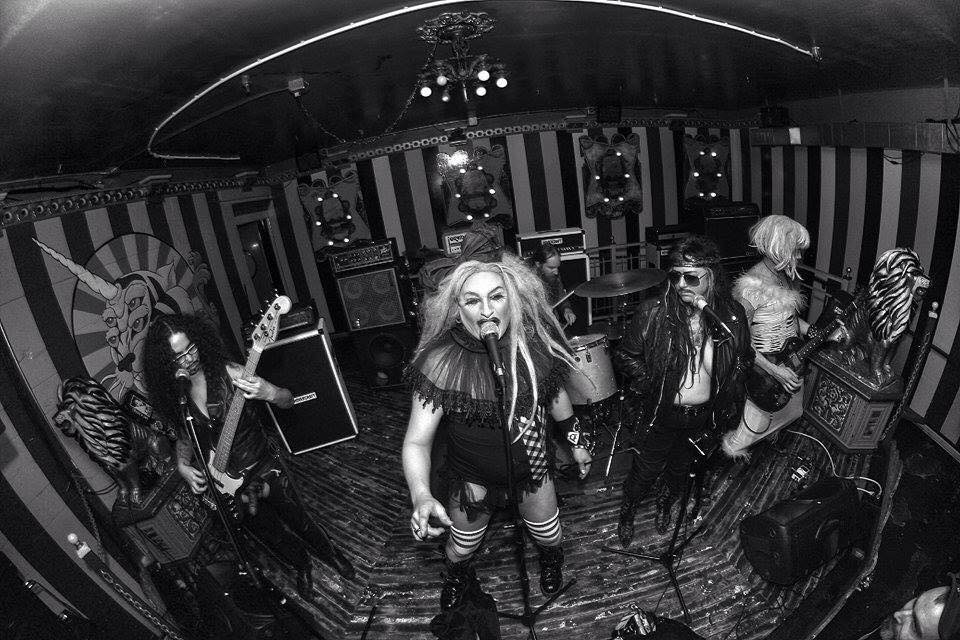 Tony James has So-O bonafides out the wazoo. He was born in Medford, raised in Grants Pass, and started his career as a performer at the Oregon Shakespeare Festival. To top that So-O cred, you’d have to pay the rent playing banjo on a pot farm.

These days, James fronts glam-rock spectacle Trannysaurus Rox, which will play Medford for the first time with a Tues, September 13 appearance at Johnny B’s. The Seattle six-piece is like a real life version of the off-Broadway smash (and small-release indie movie), Hedwig and the Angry Inch; a gender-fluid rock spectacular equal parts Twisted Sister, Ziggy-era David Bowie, and trip through Amsterdam’s red light district. And Trannysaurus Rox doesn’t dial any of it back from 11—in their thunderous rock sound, their full drag stage gear, or their gloriously foul-mouthed lyrics (the final track on their newly-released album is called, “Cunt Dick Fuck God,” which is about the only way to top the album’s title of Balls Deep Holiday).

James took the time to talk with The Messenger about the upcoming show.

RVM: How big an influence was Hedwig?

James: We call ourselves the next Hedwig. It’s one of our lead singer and drummer’s favorite movies. They watch it at least once a year with each other. The movie speaks of feeling divided and searching for self. We think each member of this band is doing just that. By playing together, we become whole and have a purpose behind what we’re doing.

RVM: How much do you play inside versus outside the queer music scene? Do you see a difference when you do?

We tend to play with a lot of heavy metal bands. Which is kind of funny for us because we totally fit in yet at the same time we are completely our own thing. No matter what show we play we always stand out. And our style of music also isn’t necessarily the style of music young gay men or women listen to. We are definitely not Britney Spears. But our lead singer thinks he/she’s Beyoncé. It is our hope that the LGBTQ Community becomes more loyal as a fan base.

RVM: Why is trans identity important to your band? Is it just an aesthetic or is core to what you’re trying to express with your music?

James: When we started the band it was drag. But now that are characters are fully realized we identify as trans in our own way. Every human being is in constant transformation/transition. Every member of this band has been in relationships with trans people at one point or another. We are fully looking forward to the community accepting our message and bringing it to the people that need to hear it. We are a gender-queer band.

RVM: The term “tranny” has been said to be derisive. Is using it in your name an act of reclamation? A middle finger to propriety? Or is it just a clever pun?

James: The answer to this is yes to every question…For some it’s a very offensive word. We have had countless conversations about changing our name to just T-Rox, but it comes down to your second question; we are reclaiming the power of our band name. We hope everyone will see that we took the most powerful of the dinosaurs, the mighty T.Rex, empowered with a queer name.

RVM: Any expectations for your first time playing in Southern Oregon?

We don’t know if Southern Oregon is ready for what we have coming for you. If you are a church-going person, this show might not be for you…[but] if you are free-thinking person who challenges all the norms in the communities that you live in, you’re going to want to come to this show! Because it not only is going to change your life, it’s going to change our lives in meeting you.

The Prodigal Non-Gendered Child Returns: Trannysaurus Rox is a Real Life Hedwig and the Angry Inch