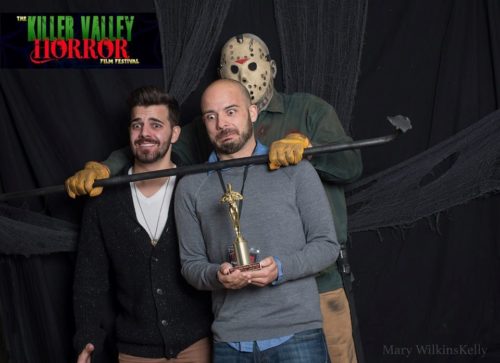 Once through the holidays—which themselves can be comedic and horrific at times—the winter film season starts off with a balanced blend of the Killer Valley Comedy and Horror Film Festival on January 4 (comedy) and January 5 (horror) at the Ashland Hills Hotel and Suites.

Killer Valley Horror Film Festival has been around since 2007, presenting local, regional and open submission films from just about everywhere. Starting in 2019, the festival expands to a night of comedy and a night of horror.

“This is our eleventh annual Killer Valley Horror Film Festival and our first annual Killer Valley Comedy Festival,” says Killer Valley Film Festival Program Director Ross Williams. “For years Randy Granstrom and I have been wanting to expand the horror festival and decided to add a comedy night to the line-up because we feel like they play well together. Both are film genres with fervent fandoms, and unlike most other film genres both create visceral reactions in their audience. As a filmmaker, nothing is more satisfying than hearing an audience react to your film, whether that be a laugh or a gasp.”

Killer Valley kicks off with Friday evening comedy film laughs, featuring a surprising number of shorts (approximately 30!) in addition to over 20 “mini” shorts, which are shorts shorter than 30 seconds. These quick clever clip length films links the dozen or more feature shorts.

Saturday brings a night of horror shorts. A favorite genre for many, horror films are delightful—and what a great date night destination, eh? Or, who can forget Silent Night, Deadly Night, a Santa-led blood bath? (Oh, most everyone, it turns out!)

“I’m most excited about sharing films from all over the world with our local audience,” says Williams. “I think we offer films that other local film festivals do not, we love to share films that are a little more out on the edge and aren’t made for every audience. We started as a way to showcase our own horror films with audiences and we love to continue to support local films and filmmakers, we offer free entries to anybody within the Jefferson State area, and if you’ve successfully made a film that falls in one of these two genres, than we’re also very likely to show it. We want to give every local filmmaker a chance to see their film with an enthusiastic audience.”