The Most Authentic of Classics: The Russian Grand Ballet Performing Swan Lake at Craterian Theatre 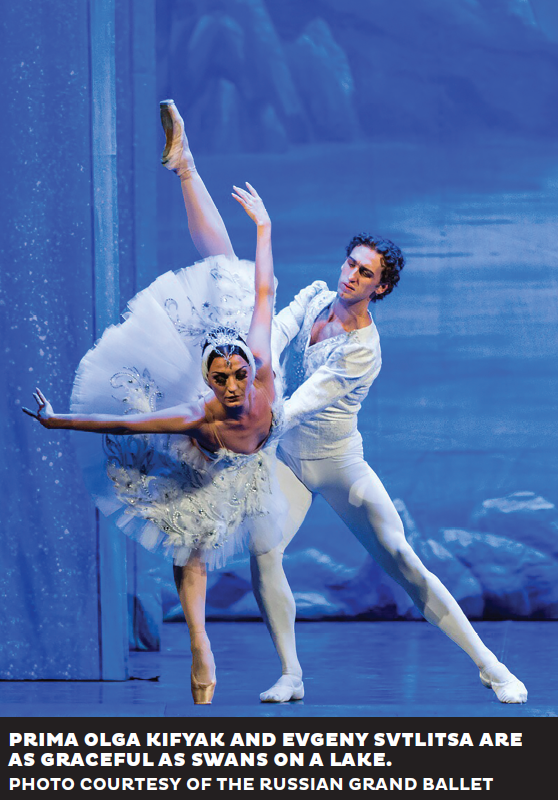 The story of Swan Lake is enduring. Derived from Russian fairytales, it speaks about. It is a beautiful fantasy that speaks to contemporary audiences about beauty, jealousy and an evil magic sorcerer turning a young princess into a swan—themes that resonate as much to contemporary audiences as they did to 19th century watchers who didn’t have the clutter of the humility of reality TV and ego-bashing social media. And, perhaps no one revives that original elegance better than the Russian Grand Ballet.

“What we do is consequential,” says Prima Olga Kifyak. “Every member of the audience comes to the show with all their problems in their heads…It is important for the spectator to immerse themselves into this fairytale and to live it through with us––if he does it, he distracts from his worries. And this is the most important part––to have the audience leave the theatre at the end of the show in a great mood.”

The Russian Grand Ballet has become an iconic performance medium. Founded in Moscow, St. Petersburg, and Kiev, it has over 50 dancers today. Artistic Director Constantine Pinchuk says, “We are highly dedicated to the timeless tradition of classical Russian Ballet. The main idea of our theatre is to maintain the traditions of classical ballet. The art of ballet, on my point of view, is mostly suitable for young, energetic people with a sparkle in their eyes, who treat the traditions of classical ballet with a great care and thrill.”

The troupe made its way through the U.S. for the first time in their last tour, bypassing Oregon, but Company Manager Gulya Hartwick says, “We couldn’t miss it this time.”

Though the troupe is called the Russian Grand Ballet, it doesn’t consist solely of Russians. Dancers from Ukraine, Moldova, Italy, and even Japan participate in the troupe.

“The main thing for us is not a nationality,” says Pinchuk, “but a dancer’s passion for dance and his, or her professional qualities.”

According to Pinchuk, “Swan Lake is a masterpiece of classical ballet and on my personal opinion it should be experienced at least once in one’s lifetime.” She acknowledges Pytor Ilyich Tchaikovsky, the creator of Swan Lake, as a “Russian genius.” The first performance in 1877 opened to underwhelming reactions and was soon forgotten, but not by everyone. With additions and changes added to the original performance, Lev Ivanov “added smooth movements of majesty and made them to sing the music with their hands,” says Pinchuk. “Since the 1895 premiere of the revised Swan Lake, it is a recognized lyrical apex of the Russian Ballet. It had at least four authors: two composers and two choreographers.”

Beyond the music and choreography that goes into each performance, each performer has great physical demands that require hours of training. “A male dancer lifts over one and half tons worth of ballerinas during performances,” says Pinchuk. “One tutu costs up to $2,000 to make. The same tutu requires 60 to 90 hours of labor and over 100 yards of ruffle.” She also stresses how unison is essential and extremely challenging during each performance. “The dance was meant to imitate the way cygnets huddle and move together for protection,” she says. “Ideally the dancers move in exact or near-exact unison. At the very end, they break their chain and try to ‘fly,’ only to drop to the ground.”

The Most Authentic of Classics: The Russian Grand Ballet Performing Swan Lake at Craterian Theatre