The Intricate Power of Minimalism: Julius Caesar Opens at the Oregon Shakespeare Festival 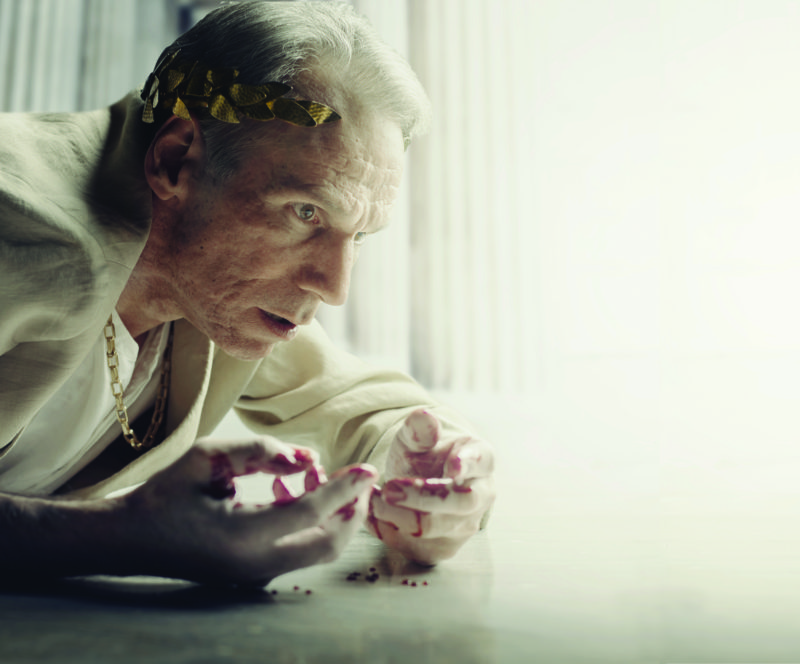 “Between the acting of a dreadful thing and the first motion, all the interim is like a phantasm, or a hideous dream,” Brutus says in frustration as he contemplates taking the life of his friend, Julius Caesar.

Shakespeare’s Julius Caesar, directed by Shana Cooper at Oregon Shakespeare Festival, confronts the intricacies of politics and man. Armando Durán plays Julius Caesar, a man winning the favor of the people of Rome and rising to power through his successes and humility. Dressed in comfortable, white clothes, he greets the crowd with a charm the public is eager to follow. While his power steadily rises, there are opposing men behind him, dressed in grays and blacks, concerned about what Caesar is capable of. Even Brutus (Danforth Comins), Caesar’s friend, is concerned, and eventually sides with those who refuse to give this man the crown of Rome. Once Brutus joins the conspiracy to kill Caesar, a plan is set into motion as to how and when the killing is to take place.

With that comes the most dramatic scene in the play. Caesar’s murder is brutal, horrifying, and bloody. As each man thrusts his knife into Caesar, blood coats the floor, as well as the men’s hands. Scenic Designer Sybil Wickersheimer captures the mood of the play in the white walls, crushed and falling throughout the play, represent either a past of innocence or an omen to what this empire will not become. To further the crumbling walls, an unfinished statue of Caesar sits in the back of the stage for most of the play, eventually taken away and never fully revealed. Perhaps one of the most impressive performances is Rodney Gardiner’s portrayal of Cassius, who persuades Brutus to support the conspiracy. His belief in Caesar’s potentially dangerous influence on Rome is vicarious.

Julius Caesar shows how there’s no straight answer; it’s what one believes in that gives him the strength to carry out his conspiracies or support his actions. The minimalism of the set and music (by Paul James Prendergast) in this play heightened the complicated characters, from Brutus’s struggle to kill his friend to Caesar’s reasoning to ignore Calphurnia, his wife’s (Amy Kim Waschke), warning to not meet with the Senate. As riots break out and chaos ensues once Caesar is dead, the audience can’t help but wonder if what the Senate did was for the best of the people, or if it was the best for themselves.

The riots and war are shown in aggressive choreographed sequences, in the end showing the neutrality or equality of man as Caesar’s ghost joins in. The use of flashlights distorts characters’ shadows, making Brutus’s shadow a giant or multiple shadows of him, as if his fears are multiplying. As each character dies, one can’t help but wonder if this all could have been avoided if one man was allowed to live.

“There is a tide in the affairs of men,” Brutus tells Cassius. Because of their actions, that tide is a tsunami.

The Intricate Power of Minimalism: Julius Caesar Opens at the Oregon Shakespeare Festival