Home»Screen»The Galapagos of North America: Klamath Showcases the Region as It Was 500 Years Ago
Screen

The Galapagos of North America: Klamath Showcases the Region as It Was 500 Years Ago 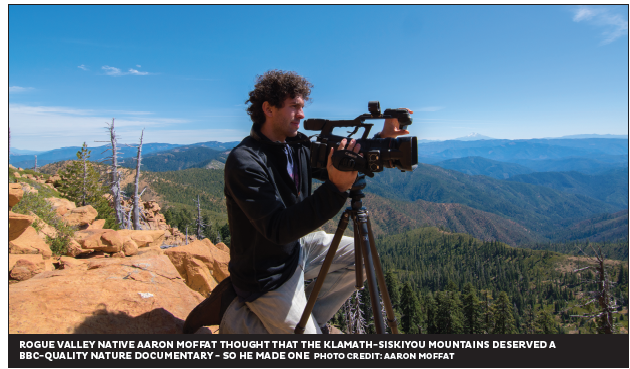 Filmmaker Aaron Moffat was trekking in a remote part of the Klamath wilderness when he lost his camera—and the expensive, first-generation drone it happened to be flying on. GPS was down. So was the communication system. Dutifully maintaining altitude, the drone glided out of sight.

How do you find something the size of a backpack in a mountain range that covers hundreds of square miles? Moffat employed the same strategies he uses to find the unmapped natural wonders that appear in his documentary. He went home and logged on to Google Earth.

Before it failed, the last image the drone had sent to Moffat was of an oddly shaped pond.

“It was the same quality of image that you would get using a cell phone camera,” recalls Moffat. Still, he was able to find the pond in the fuzzy satellite imagery. Then, by calculating the drone’s remaining battery life, heading, and wind drift, Moffat created a probability map of the most likely area it would have ended up.
The result is as much a testament to sheer luck as it is to Moffat’s DIY genius.

“I found it lying on the ground dead in the center of the high probability zone,” laughs Moffat.

This method of filming may be unconventional, but Moffat is certain it is the future—especially now that the technology is a little bit more reliable. Over countless treks into the Klamath-Siskiyou mountain range, Moffat and his drones captured 50 terabytes of footage of waterfalls and wildlife, rivers and rainbows, fungi and cliff sides.

The film released this April, simply titled Klamath, and shows its strength in its unfettered shots of pure natural awesomeness. But, there’s a story cleverly interwoven with the scenery. Without falling back on clichéd comparisons of flying seed pods and parachutes, Moffat builds a graceful narrative about the true origins of technology.

“Inside every leaf and cell are the answers to trillions of questions,” murmurs Moffat in his narration to the film.

What he’s getting at is that nature doesn’t just support the physical means for our existence—perplexingly, it’s what’s inspired us “forward” into the industrialized, digitized version of nature we now live in.

Moffat’s research for the film involved speaking with botanists, mycologists and ecologists familiar with the region, who agreed that the biodiversity here earns the Klamath’s informal designation as the “Galapagos of North America.” Even without the film’s epic score of classical masterpieces, nobody could walk away from Klamath without a greater sense of wonder and respect for the wilderness in our backyard.

Some might find Moffat’s avoidance of clear-cuts and otherwise altered landscapes to be unfaithful to the environmental movement, but his aim is true.

“I did it because I wanted to showcase intact ecosystems,” he explains “I don’t want people to start seeing clear-cuts as ‘natural’.”

Moffat hopes that by showing viewers worldwide the wonders of the region stretching over northern California to southwestern Oregon, they might come visit it themselves, build better trails, and work with locals to protect it.

Better trails would have made Moffat’s work easier, but somehow he pulled this one off. Though a self-taught drone filmmaker, editor, researcher, writer, and narrator, Moffat knows he can’t do the job of saving the Klamath alone. The film is available to view for free on his website, ksfilm.org, and he invites anyone to host a showing for a group of three, thirty, or three hundred. Whether you were raised in a backpack or have never ventured past Hyatt Lake, the probability is high that watching this film will show you something new and delightful.

The Galapagos of North America: Klamath Showcases the Region as It Was 500 Years Ago