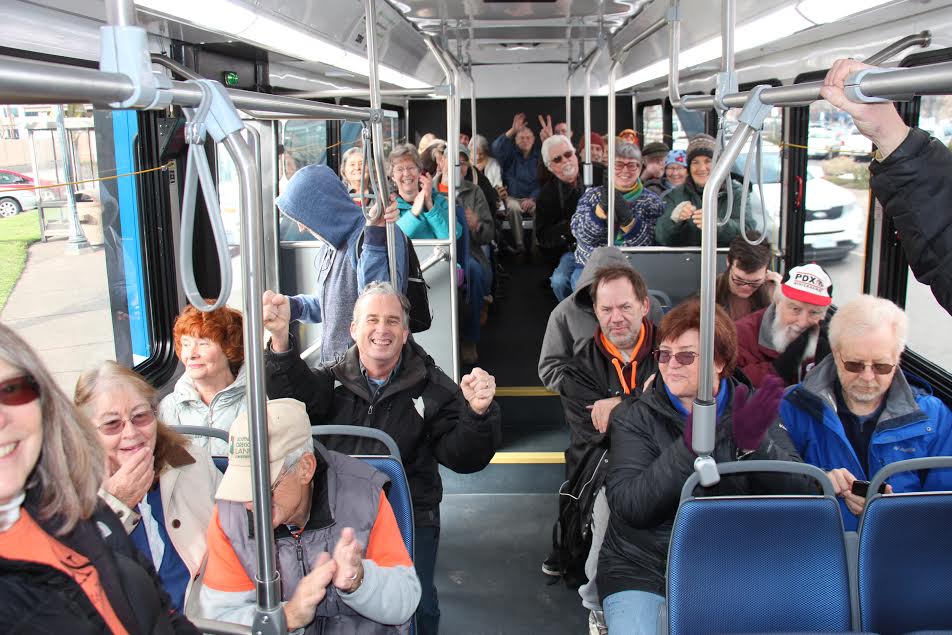 The silent bus crept out of the Front Street Station at 12:15 pm on the auspicious date of Friday 13. Aboard, a happy band of Southern Oregon Climate Action Now (SOCAN) members and friends were making the trip from Medford to Grants Pass on a Zero Emissions Propulsion System (ZEPS) electric bus from Complete Coach Works, a California-based company. This bus in particular is being considered by Josephine Community Transit (JCT) for addition to their fleet—and for reduction in carbon emissions.

The group of 40 or so travelers boarded the lunch hour Rogue Valley Commuter Line (RVCL) service from Front Street Station to Grants Pass to support electric buses and enjoy a meal at “The Haul” on H Street in Grants Pass.

In a time when those trying to reduce greenhouse gas emissions have too little to cheer about, the prospect of encouraging JCT to invest in an electric bus was just too good an opportunity to miss. According to the EPA, a single electric bus can produce $55,000 in health savings compared to a conventional diesel-powered bus. Moreover, Eugene’s Lane County Transit anticipates that i5 electric buses will save over $43,000 in operation costs, a saving of over $8,000 per bus. Meanwhile, Complete Coach Works, the manufacturers of the Zero Emissions Propulsion System (ZEPS) electric bus visiting the Rogue Valley, report an Argonne National Laboratory assessment showing that the greenhouse gas emissions from an electric bus, even when powered by conventional electricity, are substantially lower than those from diesel, diesel-hybrid or compressed natural gas buses. And, of course, if that electric bus is powered by renewably generated electricity, its emissions are zero.

JCT Program Supervisor Scott Chancey made the trek down to Medford and back on the ZEPS bus. Chancey, who is largely responsible for the electric bus opportunity, stated: “We are hoping to save about $1,000 a month with an electric bus; imagine how much we could save is we had several such buses.”

Accompanying the electric bus fans on the regularly scheduled RVCL trip were surprise and genuine passengers Rob Tracey, with his bicycle, from Portland, and Grants Pass resident Candy Barton-Smith with her dog Strider. “I ride public transit a lot,” said Tracey, “and this is a very smooth ride compared to the conventional diesel bus.”

With transportation accounting for some 29 percent of the United States’ greenhouse gas emissions, these buses are a double-opportunity to reduce those dangers—first, by providing mass transportation and, second, without emissions.