The future of wilderness firefighting may include unmanned flight, but for the gritty, ridge-by-ridge work of fighting wildfires, this promising tool is still in its fledgling stage.

Unmanned Aerial Vehicles (UAVs), also known as drones, are aircraft without human pilots onboard. The military applications of these craft are well known, as seen in the news and in the flashy movies like Eye in the Sky, conducting surveillance on our borders or delivering missiles in far off theaters of war.

In recent years, though, the domestic hobbyist market for drones has exploded and prospective commercial uses of the technology is creating a gold rush atmosphere. From retailers to delivery companies, from real estate and agriculture to video production and security, commercial applications have made UAVs a growth industry.

Earlier this decade, the young industry stalled out as it waited for the Federal Aviation Administration (FAA) to announce rules governing UAVs. Finally, two summers ago, the agency released its highly anticipated order. Under the new rules, recreational drone flying must follow the FAA’s rules for model aircraft. Commercial drones are more tightly regulated: vehicles up to 55 pounds can operate only in the daytime and at speeds less than 100 mph. They must fly under 400 feet and not within 400 feet of towers or tall buildings. Operators must maintain a visual line of sight with the drone and be FAA certified, among other restrictions (see knowbeforeyoufly.org for more information). Rules for government entities are similar to commercial restrictions, but with an option to apply for a public certification with self-certifications for pilots and an ability to obtain emergency certifications. 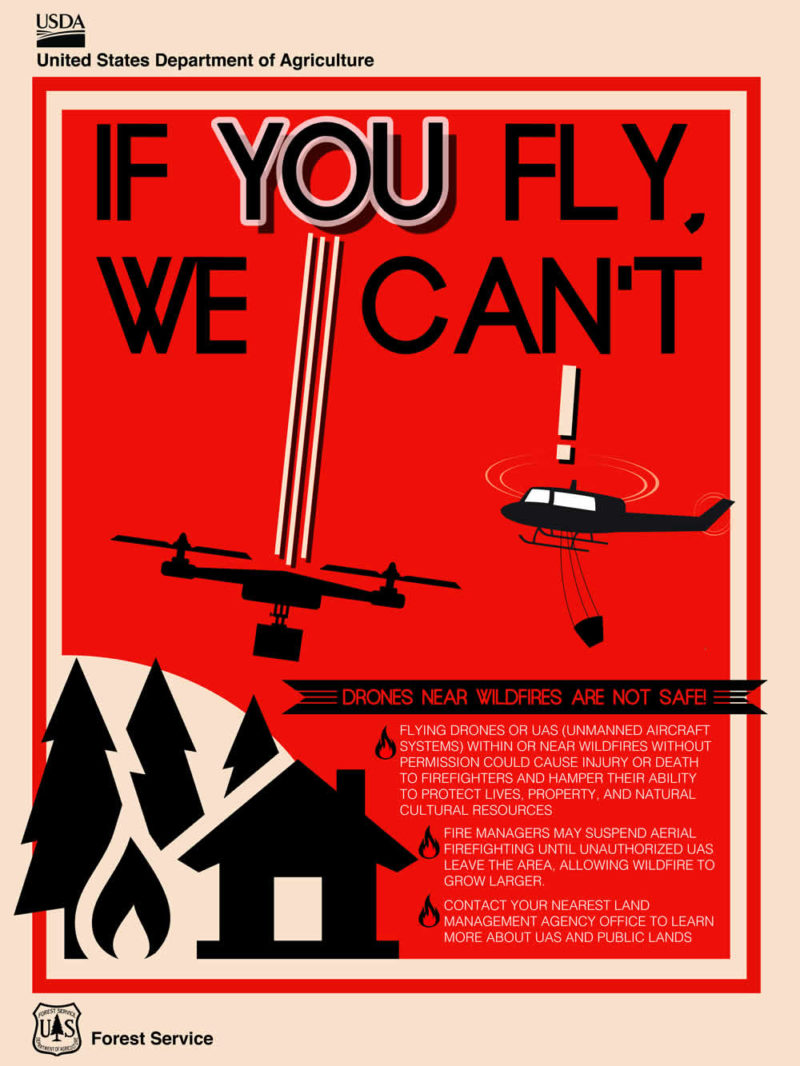 Public safety is one of the most promising areas for drones, especially as a tool for search and rescue and firefighting. The U.S. Forest Service has used a drone in its air operations at the massive Chetco Bar fire on the Oregon coast, operated by certified pilots from the Department of Interior. Terry Krasko, of the U.S. Forest Service, told the Messenger, “We did have a rotary aircraft doing recon work in thick areas of brush out here. It was quite useful.”

The Oregon Department of Forestry, Southwest District, which responds to fires on private, industrial and BLM properties in Jackson and Josephine counties, received one small drone from the state in 2014, primarily for testing and allowing a staff member to train for his operator’s license, but it hasn’t been part of ODF’s firefighting operation. According to Melissa Cano, spokesperson for the ODF, before UAVs can become a part of their arsenal “we will need a policy fine-tuning how air operations coordinates with drones.” She told the Messenger that ODF is unlikely to deploy drones in the foreseeable future, as there is no budget for developing the policy, upgrading current equipment, or training pilots. A local district, Applegate Fire District One, has received a grant to acquire two drones, training, and FAA certification, with a goal of deploying the system in early 2018.

The benefits of drones to public safety seem clear: fast scene assessment, with reduced risk to firefighters or pilots, better and more flexible perspectives for visual or thermal surveillance, and shorter deployment time, from arriving on scene to getting in the air. For battling wildfires in remote, rugged backcountry, drones are especially appealing. On the other hand, current protocols and procedures for aerial support in firefighting are well-established. UAV systems are very expensive, ranging thousands to hundreds of thousands of dollars. Any agency that uses drones must train pilots and obtain a certification of authorization from the FAA (in emergencies, an expedited authorization process is available.) What’s more, the public has expressed concern over violations of privacy and property rights when the police or other agencies use drones for surveillance. Agencies like the U.S. Forest Service and Oregon Department of Forestry don’t usually encounter these criticisms, but future policy discussions may need to need to address it.

Nationwide, the low cost and popularity of drones among hobbyists is presenting another problem for firefighters. Amateur flyers, lured by dramatic, aerial wildfire footage, have at times forced local fire commanders to halt air operations. Earlier this summer, a helicopter was grounded by a drone incursion into the airspace over a grass fire near Grants Pass. Such amateur incursions are prohibited by the FAA, subject to civil penalties up to $27,500 and possible criminal prosecution. The Department of Forestry encourages anyone who sees a drone over an active fire scene to call 9-1-1.

In years to come, drones will require fire agencies to develop new methods, finding ways for manned and unmanned vehicles to coexist, safely, in air operations while crews try to contain wildfires that seem to grow larger and more destructive each year.