Home»News»The Day the Music Died (in Ashland): Ashland’s Losses of Music Venues is The Rest of the Region’s Gains
News

Ashland’s music scene? Call it. Time of death? July 1, 2016. That was when Ashland’s final remaining dedicated venue, Club 66, packed up and headed down the freeway to Medford. It followed the closure of The Lounge South last year, the cessation of live music by Caldera Tap House several months ago, after they got fed up dealing with music licensing agencies like ASCAP and BMI, and the wildly arbitrary—and constitutionally dubious—new sidewalk ordinances in downtown that can land street performers in legal trouble.

Critics will of course point out that there are still places to see music live in Ashland. They’re correct, but each comes with a glaring asterisk; Oberon’s (too small for anything with a drum set—aka, most bands), The Old Ashland Armory (too big for anyone without a gold record—aka, most bands), Brickroom (a restaurant that occasionally has music, rather than a place to see music that also has food—a crucial distinction), Milagro’s (same as Brickroom), and The OSF Green Show, which—like OSF itself—is more for out-of-towners.

Additionally, it should be mentioned that the music those places offer is narrow. Acoustic acts may not notice the difference, but local metal, hip hop, non-cover rock, electronic and experimental acts, are now largely without a water cooler at which to gather and talk shop, to make connections with touring acts, and to learn from one another, and to do consistently: in short, a scene. And what’s more; it was a diverse and original scene that was bursting at the seams just two years ago.

Opinions on why Club 66 had struggled were myriad. Its non-downtown location. Its lack of liquor. Its pathological opposition to marketing. The “yard sale,” of used music gear in its entranceway making it seem seedy. But it had limped along for several years in that condition. The thing that finally did it in was what no one ever expected: the building sold.

Ulizzi says that after that long, he’d pretty much stopped being concerned about it. But then the owners dropped the price. Club 66’s building had originally been listed at near a million dollars. It’s selling price was closer to $350,000.

But that he chose to move the venue to Medford rather than inside the city is yet another barometer of its sparse real estate and challenging business environment.

“It’s tough here in Ashland,” says Ulizzi. “I always thought that the city’s price were super high as far as electric and water. They throw out all these conditional use issues. It hit my bottom line too hard.”

Then there’s the city’s labyrinthine and much-loathed sign code, which the city says is needed to “safeguard and enhance the economic and aesthetic values in the City of Ashland,” an Orwellian phrase if ever there was one. Here’s some of the introduction from the city’s website as a taste of Terry Gilliam’s Brazil in practice: “Business owners are encouraged to develop a sign program that accounts for all types of signs they wish to display into consideration, from the large wall sign above the door to the small open sign in the window.”

“I couldn’t put a sign out announcing the specials or anything,” says Ulizzi. “It made it really hard. Here you want me to pay 5 percent food tax, but you won’t help me get people in the door?”

Ulizzi also struggled with yet another perennial enemy of the people, the Oregon Liquor Control Commission. Club 66 was accessible to minors, but only until 8pm.

“Some places have 9 pm, some have 10 pm, some places kids can be in there all the time,” says Ulizzi. “I really wanted to stretch it out, because those are really tough hours and it really affects the bottom line if kids and their parents can come in at the same time.”

The reason why the OLCC capped the hours is nightmare fuel for creative industries.

“We have too loud of shows,” says Ulizzi. “[The OLCC] was stricter because of the kind of music we have.” 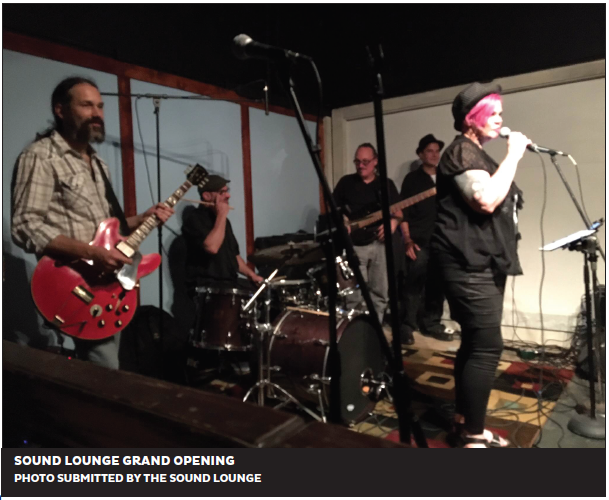 But Ashland’s loss is other places in the region’s gain; especially Grants Pass seems to be burgeoning. The Rogue Valley’s lawless northern tip is growing, and new and expanding venues are pulling in all the bands that can no longer find a place to play in Ashland. Even local superstars like 100 Watt Mind and Indubious, are finding greener pastures to the north. The Haul in Grants Pass offers diverse and free shows every weekend, The Rogue Theater brings in the classics, The G Street Bar and Grill gets rowdy, and things are will be getting an extra shot of class thanks to the Sound Lounge, which just opened its doors on Saturday, June 25.

The Sound Lounge is the brainchild of Tim Gallineau, who ran the Blue Monk, in Portland’s iconic Belmont neighborhood, before moving to Grants Pass two years ago.

“I moved to Grants Pass for the same reason I moved to Portland: to get out of traffic,” he says. “To get smaller.”

But he saw that the city was growing and felt the arts scene should grow with it. So Gallineau started a First Friday music series to test the waters.

“I’m 47 years old and I’ve been promoting music pretty much my whole life,” he says. But the last thing I wanted to do is be a big city guy coming in and telling people how it is.”

Gallineau says the series proved people would pay a cover. So he pushed forward with a full venue.

That venue, The Sound Lounge, did a soft open with junkbox superstars, Hillstomp, and has gotten commitments for DJ sets from blues legend Curtis Salgado (the inspiration for the The Blues Brothers), and Trey Shannon, the man behind three Portland cultural institutions: The X-Ray Cafe, Karaoke from Hell, and Voodoo Donuts. Gallineau is also working his Blue Monk connections to pull acts in off the I-5 circuit, and even to lure in some Portland bands that mostly tour internationally.

“Pushing the arts scene gets me more excited than In and Out coming,” says Gallineau.