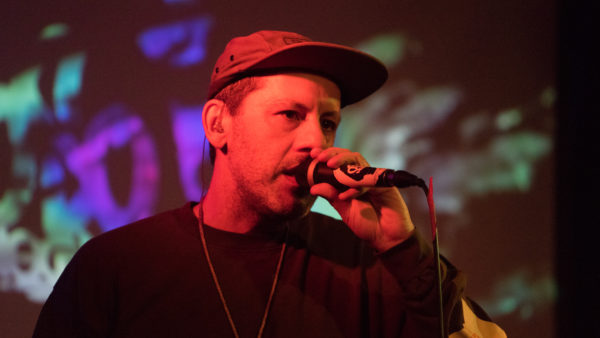 Eastern Oregon and Hip-Hop are not exactly synonymous, but at least one artist is busy in his desert lab putting rhymes over beats. For the past ten years Oregon emcee, Oso Negro, has been making music and touring the west coast. Alongside Z-man, Eva Rymes, DJ Surebert, and DJ True Justice; Oso Negro will be playing seven shows in seven days up and down the coast. And on Sunday, April 22, Oso Negro and company will be playing Medford for the first time.

Oso Negro lives in the state of Oregon, but he is actually closer to the music scene of Idaho.

“I’m about an hour from Boise,” says Oso. “It’s a small farm town; I live right downtown. It’s boring. We’re actually in Mountain Time; they’ve tried to annex the county to Idaho. In fact they outlawed weed and are trying to set up a sales-tax. It’s the desert so it’s dry as hell; everything past Bend is dry.”

Oso started out singing in school and church like many musicians. But he hit his musical stride in Mississippi as a grad-student.

“I joined a band in 2001. I was the frontman,” says Oso. “And gradually became a solo artist. I moved out west in ’06. I wasn’t active doing music stuff and then in 2008 I kicked it in high gear; and started touring in 2010. I just took a couple years to build up my repertoire and my chops.”

Music has always been present in Oso’s life, but becoming an emcee was something that evolved over time.

“I started at it late,” says Oso. “I was halfway through grad school when I started, and I went to grad school for a long time. [Music is] just a good release; and good mental and physical activity. Touring gets me out on the road. I continue doing it because it’s my art. It’s what I do.”

Oso Negro is already working on his latest EP with producer PH8, who provided a few beats on his 2014 release, Unkie O.

“I have a project, it’ll be coming out this fall,” says Oso. “I think I’ll be calling it, Glory and Gory Stories. And that’s going to be produced by Ph8 out of Taos, New Mexico.”

Other than preparing his latest album for release, Oso is busy planning to move out of the desert.

“You know this next year everything is going to be up in the air,” says Oso. “This is kind of a last hurrah so I can’t commit to any more touring or anything. That’s why I’m sitting on this project. Get the mixes tight, get settled somewhere else and be productive in the meantime. We’ve been here since ’06, so it’s going to be a summer of change.”

Getting the music out there is priority number one for everyone on the tour. But they are definitely going to live it up while traveling up and down the coast.

“We’re doing seven shows in seven days,” says Oso. “It’s the first legal 4/20 in California, for Nevada too really. We’re in Humboldt on the first 4/20. Then were doing Newport and Medford; a real 420 kind of run. Oregon’s been doing it, so why not just make that loop. Enjoy all that the west has to offer.”