Home»Feature»Tempest in a GMO-free Teapot: The legal battle over GMO-Free continues
Feature

Tempest in a GMO-free Teapot: The legal battle over GMO-Free continues

Nearly 18 months ago, voters in Jackson and Josephine County voted to ban genetically modified crops—or, GMOs, as they are better known. It was David versus Goliath politics.

“We won that imitative on $20,000 because a group of citizens came together – liberal, conservative, someone from every stereotype,” says Mary Middleton, Director for Oregonians for Safe Farms and Families who helped guide the campaign in Josephine County.

Meanwhile, large out-of-state corporations poured hundreds of thousands into the effort to defeat the initiatives 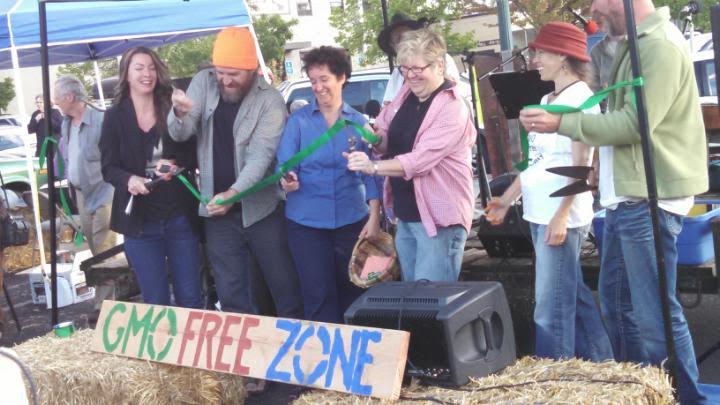 However, a lawsuit filed by a beet farmer has hit the pause button for enactment of the GMO ban in Josephine County and, meanwhile, the ban in Jackson County also languishes more as an idea than a full-court press as local officials have balked at enforcing the law all the legal maneuverings are settled.

“I don’t like to refer this as a fight, but I guess it is,” Middleton explains.

In spite of a massive media blitz against the GMO ban, it passed overwhelmingly in both Jackson and Josephine Counties. Yet, in spite of that popular support, the bans have yet to take full force. After the ban were passed, Syngenta, a multinational agribusiness and biotech company, pulled its warehouse out of the region and cancelled contracts for what few genetically-modified sugar beet crops it apparently had in the region; and, another independent corn farmer reportedly changed his practices from GMO to organic because of the public pressure. But a few farmers have pushed back—and that resistance has proven tenacious enough to hold back fully rolling out the GMO bans in both counties.

The ordinance in Josephine County provided farmers a full year to change their practices and was set to begin its enforcement a month ago, but Robert and Shelley White challenged the GMO ban. While not currently growing GMO beets, they say that they have in the past and wish to be able to do so in the future.

The compliant plainly states: “The ordinance conflicts with Oregon State law, and, among other things, requires farmers to destroy valuable crops they have planted, cultivated, and plan to sell. The Ordinance also, among other things, prohibits the growing of GE plants in the future and thereby interferes with the livelihood of many farmers.”

Although the lawsuit is leveled at the county, last week Oregonians for Safe Farms and Families filed “a motion to intervene,” essentially a request to help with the defense of the ordinance.

“It is unfortunate we have to go through this process,” says Middleton, “but it’s important to stand up for the will of the people.”

As such, the lawsuit places Josephine County as the primary battlefield over GMO bans in Oregon. Several other efforts to confront GMO crops have mobilized in the past few years—in Lane and Benton County, as well as the two southern Oregon counties of Josephine and Jackson. In late 2013, in what they said was an attempt to create uniformity in the state, the Oregon Senate voted 17-12 to forbid local bans on GMO crops. However, that law exempted Jackson County, where voters were already gathering signatures for an initiative to ban GMOs. The rationale was that the effort to place an initiative on the ballot in Jackson County pre-dated the legislature’s decision to forbid bans. Josephine County, though, was not excepted; state senators supporting the ban on bans contend that the signature gathering for the imitative in Josephine County began later, an assertion with which supporters of the Josephine County initiative and subsequent ban disagree. The upshot is that the GMO ban in Josephine County may or may not conflict with state law—and, that is the legal vulnerability that the current lawsuit is trying to leverage.

“Obviously we won with public opinion and I have a lot of faith with our attorneys,” says Middleton. “They are really, really sharp. We’re the little county that could.”

While the GMO ban in Josephine County is suspended while the current lawsuit works its way through the courts, the GMO ban in Jackson County also has settled into a sort of gray area: This summer, the ban took effect, but its enforcement remains in question. Starting in June, residents were essentially deputized with the power to report any farmers or fields they believed were not complying with the ban. The penalty for a violation is the destruction of crops. However, county officials have stated they will not actively patrol for violations, and no complaints or allegations have been filed by residents. An estimated 2,000 acres in Jackson County have been used for GMO crops, primarily alfalfa and corn for animal feed.

The reason for the county’s caution is founded: Even without the county pushing enforcement, last December a pair of alfalfa farmers said that the GMO ban interfered with their “right to farm” and claimed $4.2 million in damages. In April, this claim was rejected. In writing his opinion, US Magistrate Judge Mark Clarke explained that farming practices “may be limited if they cause damage to another farm’s crops,” adding that the GMO ban “serves to prevent such damage before it happens.” That particular rationale was pointed at the assertion that GMO crops can harm nearby crops if modified seeds or pollen migrate from one crop to another, one of the primary assertions by proponents for the GMO ban.

Yet, in spite of the lawsuit being denied and although the GMO ban in Jackson County is in effect, there seems to be a chilling effect on any enforcement by the county until more of the legal dust settles.

And, that legal conflict—a difference between local, voter-supported laws and legislatively-passed state or federal laws—is the same tug-of-war being waged in several jurisdictions around the country and is currently the prevailing legal context for the debate over GMO-free farming in the United States. But looking at other jurisdictions gives little indication about how the legal decisions in Oregon may unfold.

Mendocino County in California was the first to enact a GMO ban, in 2004, and has weathered several lawsuits from local farmers and pressure from state lawmakers since then. As recently as 2010, a beet farmer there planted GMOs in spite of the ban. In turn, a judge ordered the destruction of the crops—the first such action by a US court—but was stopped by an injunction, and has left the ban in a bit of a tug-of-war. On the other end of the spectrum, in June, a federal court ruled that a Maui County ban in Hawaii on the cultivation of GMO crops is pre-empted by federal and state law and invalid.

Neither of these case, though, provide any legal precedent for cases in Josephine County and, moreover, points out Middleton, agriculture law has always been a patchwork of local ordinances, as more than most laws, they truly grow out of the local culture and needs.

“This issue is about our food and protecting our farmers here,” she concludes.

Tempest in a GMO-free Teapot: The legal battle over GMO-Free continues