Home»Culture»Tale as Old as 1991: OSF’s Beauty and the Beast Strums the Heartstrings of Yesteryear
Culture

Tale as Old as 1991: OSF’s Beauty and the Beast Strums the Heartstrings of Yesteryear 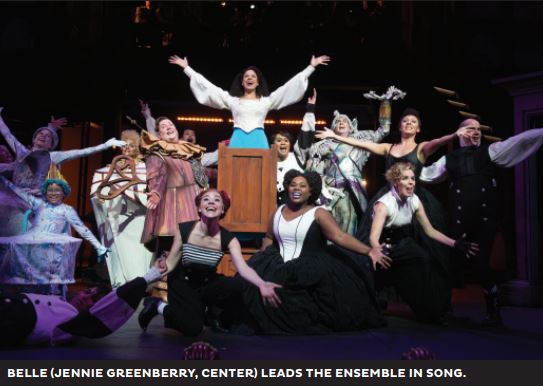 When I first saw The Lion King Broadway show in my 20s, I was transported back to third grade when I first saw the original animated Disney version in the movie theater. The talking safari animals were mesmerizing, the music was catchy, and all my friends were there watching it with me—it was epic. Flash back to a few years prior. It was 1991, and my first movie theater experience was Beauty and the Beast. So you can imagine my childlike anticipation to see such a formative film experience on the stage. And I wasn’t the only one. From young kids to folks my parents’ age, we all squealed with delight as Lumiere (David Kelly) launched into “Be Our Guest” and collectively rolled our eyes as the gloriously pompadoured Gaston (James Ryen) and LeFou (Sara Bruner) boasted about Gaston’s expectorating abilities. And scene after scene, song after song, it appeared that none of us were disappointed, up to the standing ovation.

Belle (Jennie Greenberry), a bright and beautiful young woman from a small French village, lives with her inventor father Maurice (Michael J. Hume). She longs for the adventure, intrigue and romance that she reads about in books, but the ignorant and mundane town and its residents don’t offer her much hope, especially since they dismiss her as “odd.” And her beauty complicates the situation further by giving the self-centered Gaston a reason to pursue her for marriage. Her only real companion is her father, who becomes imprisoned by a Beast (Jordan Barbour) in an enchanted castle filled with other hopeless souls. Belle then makes the ultimate sacrifice, and exchanges her freedom for her father’s. While it may seem that her dream of a bigger world is crushed in her captivity, she and the Beast learn the impact that love can have on seemingly impossible circumstances.

The story is superb. The music is superb. The acting is superb. And it must be said that one of the crowning triumphs of this production is the costumes. While the original easily created in animation and the most recent rendition leaned heavily on computer graphics, it is up to the costumers to make a woman into a teapot before your very eyes. Yes, Mrs. Potts (Kate Mulligan) was an absolutely adorable pot of tea, along with Chip (Naiya Gardiner), who was only able to be pushed around the stage by others instead of moving independently as one hopes for all children, though the curse seemed to have affected her more severely. Cogsworth (Daniel T. Parker), Lumiere, Babette (Robin Goodwin Nordli), and Mme. de la Grande Bouche (Britney Simpson) all were transformed into their respective pieces of ornamentation or furniture in a most believable and creative way, with subtle attention paid to the “progression” of the enchantment that held them all captive. And the Beast. He was positively abhorrent. In the original, he was quite dog-like, and in the live action, he was so well groomed, but this costuming truly makes him repulsive. His horns are accentuated to the point of a large ram, and from his “Mossy Oak” jumpsuit to his hunched backbone that looks like decomposing roadkill, he is truly a creature to be feared.

Whether a trip down memory lane, or a clinging Harry Potter fan, OSF’s Beauty and the Beast will hook you with the first “Bonjour!”

Beauty and the Beast

Tale as Old as 1991: OSF’s Beauty and the Beast Strums the Heartstrings of Yesteryear