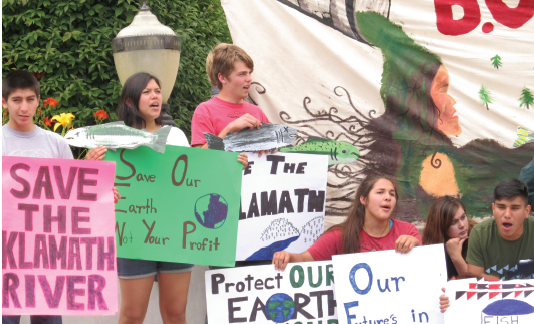 Last Monday, two dozen teens gathered at the Bureau of Reclamation office in Klamath Falls. One was wearing a Haz-mat suit, and holding gallon jugs of polluted water from the Klamath Straits Drain.

“Would you give this to your kids to drink?,” many in the group shouted at Jason Cameron, the person currently acting as Area Manager for the Klamath Basin Area for the Bureau of Reclamation. It was his first day at the job.

“No, I would not,” Cameron replied unequivocally.

For the previous week, the two dozen teens had attended the Next Generation Climate Justice Action Camp. Held at Howard Prairie Recreation Area, near Ashland, the camp offered a weeklong intensive in civic participation for teenagers. Experienced mentors gave trainings in social movement history, non-violent protest planning, how to work with the media, outreach, cultural sensitivity and Know-Your-Rights trainings. The Eugene-based Civil Liberties Defense Center hosts the camp in the Rogue Valley, because it is a nexus between urban and rural populations and accessible to Native American communities in Southern Oregon and Northern California.

At the conclusion of the week-long summer camp, the youth from Oregon and Northern California applied their new campaign organizing skills toward the formation of  “Youth Coalition for a Clean Klamath”—and took their skills to the streets of Klamath Falls to demand cleanup of the Klamath River.

One of the attendees, Dentillia Albers, age 14, from Hoopa, Calif., remembers when she first realized the river was unhealthy. It was two years ago during her Flower Dance, a coming of age ceremony for girls in her tribe, she was startled to find a “dead fish floating in front of me.” Her older brother had attended the camp’s second year in 2015 and was her inspiration for going. “I saw how fired up he was and wanted to see what it was all about,” she said.

Earlier in the day—before marching to the Klamath Basin office of the Bureau of Reclamation to stage their protest—the two dozen young campers had visited the river via the Klamath Straits Drain to get a firsthand assessment of pollution they were demanding be ceased. Part of the greater Klamath Irrigation Project, the Klamath Straits Drain moves water from Lower Klamath Lake back to the river after it has passed through fertilized agricultural fields. Recent years of drought have exacerbated the potency of this pollution, as excess nitrogen and phosphorus in the effluent from farms and ranches has combined with still water stagnating behind dams downriver. In turn, this mix of ingredients has fed the intensity of toxic blue-green algae blooms.

“What I saw today coming out of the Klamath Straits Drain made me sick to my stomach,” said camp participant and Yurok tribal member Stoney McCoy, age 16. “I will fight for as long as it takes to clean up the Klamath.”

However, the campers learned a valuable lesson about social change and protests: It often only moves as fast as the slow wheels of bureaucracy. Area Manager Cameron candidly answered the teens’ questions, and acknowledged their concerns and even attested to his own experience of dwindling fish populations, as a longtime Klamath Falls resident and fishermen. Then, he gave many of them their first lesson in government bureaucracy, informing the group that it wasn’t within his scope of responsibility at the agency to prevent pollution from entering the Klamath River, that the federal regulatory enforcement agency responsible was the Environmental Protection Agency.

Yet, in spite of the Bureau of Reclamation sidestepping responsibility, there may be solutions on the way, as PacifiCorp, the utility operating the four dams in contention, signed an agreement that will facilitate their removal by 2020, a first step in the process of Klamath River restoration, potentially bolstered up by an entire new generation wanting to work for environmental restoration.  Still, the “Youth Coalition for a Clean Klamath” attest in their press release that the salmon’s “road to recovery needs more than just dam removal, conditions must improve dramatically for the fish to survive.”

“The solution is to work to give back the rights of people and of the Native people who live here and learn how to think as an ecosystem, as a whole,” said 17-year-old Next Generation camp participant from Ashland, Isaac Bevers at the protest. “We are not separate from the ecosystem, and we need to start living that way, if we are to solve these problems, that we’ve created.”