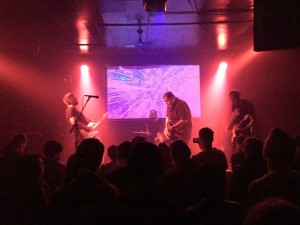 Space. The seemingly endless vacuum has captivated the imagination of generations (and proven to be the perfect place for William Shatner to make out with countless alien women). While this awe-inspiring final frontier is deafeningly silent, Boise, Idaho’s own Red Hands Black Feet are anything but. The emotionally-evocative four-piece delivers a blend of shoegaze and gravity-heavy rock colored by elements of science fiction. Now on their third tour, Red Hands Black Feet will be playing at Club 66 in Ashland on Thurs, March 31.

“We usually start with little to no idea how a song is going to turn out and just kind of play off of each other until we have something to works to around,” says guitarist Eric Larsson.

“Even fully finished songs could use some improvisation,” says Larsson. “It’s not so important to me what individual notes I play on guitar. It’s fun to have that element of chaos.”

Nowhere is this chaos better harnessed than on Red Hands Black Feet’s latest album We Must Fall Forever if We Survive. The five-song conceptual epic was initially inspired by Russian cosmonaut Yuri Gagarin’s historic first mission to space in 1961.

Larsson’s reimagining of man’s first extraterrestrial expedition seeks to understand what one might contemplate while adrift in space.

“By the first song he is grappling with the idea whether to return to earth or not,” says Larsson. “Whether he could stay out on this incredible mission forever and not come back to all the trouble and ugliness of the Cold War.”

It is clear that Red Hands Black Feet has worked diligently to craft that musical narrative. But performed entirely instrumental, it is also presented in such a way that audience members can participate in developing their own interpretations.

“The idea is that people will react more strongly to the music if there is something concrete to anchor their interpretation, but we don’t want to attempt to limit anyone’s personal reaction to the songs,” says Larsson. “We want the listener to fill in the gaps with their own imagination.”