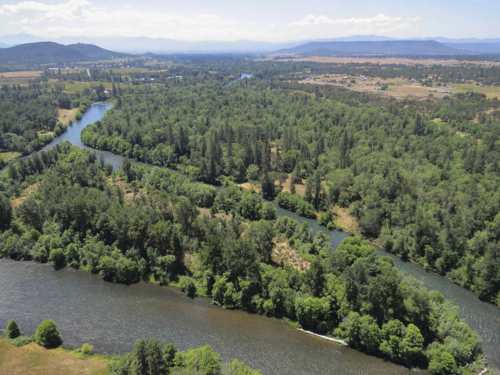 The Southern Oregon Land Conservancy, a non-profit organization dedicated to protecting ecologically valuable land in Southern Oregon, has successfully completed its Heart of the Rogue Campaign to raise $3.5 million for the purchase and management of the anticipated “Rogue River Preserve,” a rare, intact 352-acre property along the Rogue River just north of OR 234 between Eagle Point and Shady Cove. The 16-month campaign, chaired by Rogue Valley residents Patrick and Carlyn Duffy, combined major state and federal grants with an energetic and comprehensive grassroots, fundraising effort to raise enough funds for both the purchase and long-term management of the tract. Thanks to its largely undeveloped state, the Rogue River Preserve embodies how the Rogue Valley’s waterways, plants, and wildlife might have existed hundreds of years ago.

Southern Oregon Land Conservancy Executive Director Diane Garcia has the air of a first-time marathon finisher—exhausted and triumphant. “My colleagues in Land Conservation said, ‘why not start with something more like a starter home than a dream home?’” for SOLC’s very first land purchase. In its 39 years, SOLC has established 62 conservation easements working with private property owners but had never actually purchased a property itself. “As an organization, we did not want to let this opportunity pass by,” said Garcia. Small and large donors alike have sent congratulations rushing in. “Everyone can feel that they were part of the success.”

The property, owned by the Ruhl/MacArthur Family for nearly 75 years, has remained largely undeveloped since its purchase by Robert Ruhl, the editor and publisher of the Medford Mail Tribune during the first half of the 20th Century, as a country retreat. Generations of his descendants have enjoyed the land and river in the same way as Ruhl, but had decided that it was time to hand stewardship over. “My family and I are delighted that SOLC has succeeded in its endeavor,” says Maria MacArthur, granddaughter of Robert Ruhl. “It is a wonderful treasure for the Rogue Valley, and our family believes it is the best use of this property.”

Donors and the wider Rogue Valley community have already had a chance to begin exploring the “Heart of the Rogue.” Guided outings and open houses last year for groups like the Rogue Fly Fishers and Southern Oregon Historical Society provided a taste of the property’s special character. Birders, volunteers, and SOLC staff have already begun to document the verdant plant and animal life along the two miles of river frontage and upland areas, from wildflowers to giant cottonwoods, from dragonflies to elk.

The actual transfer of ownership awaits additional due diligence to meet the requirements of the main grants from the Oregon Watershed Enhancement Board and US Fish and Wildlife Service. Once SOLC has official title to the land, it expects to make a few, minor infrastructure improvements to continue to allow “gentle public access” and to protect the most sensitive natural areas. Under the terms of its grants, SOLC’s first priority will always be to preserve the land’s ecological value, and the eventual management plan will find a balance between this need and educational and recreational uses.

Garcia and the SOLC rolled out an array of fundraising techniques as diverse as the ecosystem of the Rogue River Preserve. From rack cards to a video featuring former TV star Duffy to posters to spots on Jefferson Public Radio, the Heart of the Rogue campaign attempted to reach everyone in the Rogue Valley. The health of the river and the lands along it are critical to the well-being of the communities and people who live here. “We don’t even realized how important the Rogue River Preserve will be yet,” Garcia speculates. “People in the Rogue Valley will look back in fifty years and be thankful that we saved this piece of land. It is a gem along the Rogue that is always going to be there.”