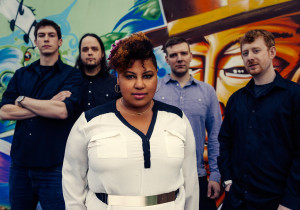 “I grew up doing choir music,” says Sarah Clarke, the booming voice of Portland band Dirty Revival, who will be playing at The Talent Club on September 19. “But whenever I went to do karaoke it was Aretha, or Beyonce.”

Thank goodness for that, because when Clarke came together with a collection of high school friends to start a band three years ago, they channeled her karaoke persona, writing songs perfectly suited to her powerhouse diva voice, and dressing them up with accents of R&B, Parliament-style funk, and hip hop, courtesy of emcee/guitarist, Evan Simko, for a powerful neo-soul sound. Those that remember seminal Oregon band Five Fingers of Funk will find much to like, as will fans of Sharon Jones and the Dap Kings, or just anyone that likes to get up get up get up with the get down.

“Soul music makes people feel good,” says Clarke. “It really speaks to people, even if you’re not a soul fan, it can speak to an emotional state.”

Between the tight beats and driving horns, that sound, that emotional state is one of it being Dance:30 in the pm. And if the band’s song, “Baby-Making Factory,” is to be believed—and with its driving “Theme From Shaft” meats “Just Like a White Winged Dove” beat, it should be—then that dancing can be every bit as horizontal as vertical. Just like TLC, the sound is equal parts, crazy sexy and cool.

“Everyone in the group writes,” says Clarke. “Whoever brings it to the table, you gotta sell it to this group. One of things that will matter the most is if when someone brings a song to the group, people will just jump on. Then you know there’s something.”

But considering the incredibly stylistic sound, and the current national conversation on race, there is something it’s a bit hard not to notice about Dirty Revival.

“One of the first tours we went on, in Olympia, a woman approached me and said I think it’s really great what you’re doing, being a black front woman for an all-white band,” says Clarke. “And that was the first time I’d thought about it.”

Clarke says that though soul music is traditionally an African-American genre, her band has embraced it fully, much like the predominantly white studio band for soul icons Stax Records.

But that doesn’t mean it’s invisible.

“We have a song called Breathe on album, discussing pretty openly all the racial tensions we’re experiencing in our country,” says Clarke. “When I play that in Portland for people I know that are on the same page with us, it’s intense, people react. When we play it elsewhere, sometimes it goes right over people’s heads. I don’t think it means they’re ignorant or bad, it’s just not part of their life. they might think that’s a really pretty song, but not see the implications.”

When the band comes to Talent, it will be hot on the heels of the release of its self-titled debut album, which is being dropped on Sept. 11 with a show at Portland’s Mississippi Studios. Though relatively young, the instantly catchy sound and dancetastic presentation has allowed the band to thoroughly conquer its home market, scoring opening slots for Slick Rick, Nappy Roots and Gift of Gab, Sir MixALot, amongst others, and earning a fervent following even in the saturated Portland music market. Clarke says that when getting out of PDX, the band likes to find smaller market and do the same, showing up again and building a solid relationship with local music fans, something they hope to do in Southern Oregon as well.

“We’re a big family,” says Clarke. “So the more the merrier.”