Home»Food»Somewhere Over the Rainbow: Omar’s Is More Than Just a Restaurant
Food 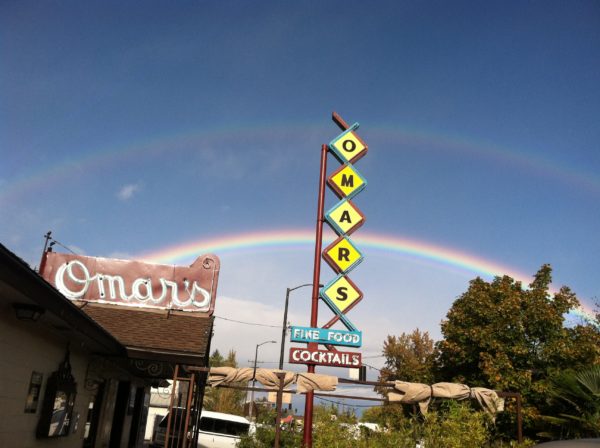 In some ways, a good place to start a story about Omar’s in Ashland is with the hard-boiled detective writer, Raymond Chandler. He didn’t necessarily visit the place ever; at least, not in person, but perhaps in spirit.

The godfather of gritty lit noir was in the zeigest when Omar’s—the namesake diner-tavern-steakhouse of Omar and Hazel Hill—was built in the mid-1940’s. The couple knew the restaurant business from Hollywood, having grown their careers at the legendary Brown Derby and Savoy, before moving to southern Oregon and bringing something of those famed establishments with them, as well more than a pinch of the stylized, tough-knuckled noir of Chandler.

While Omar’s setting is central to chasing the ghosts of 40s lit noir, the food that they serve is the centerpiece of the story that adds to its mystical aura. “We have tried not to change much on the menu,” current owner Jen Sink told me. “We all agree that keeping things similar to what it was years ago is best; keeping it a traditional steak house while still incorporating fun new items on the daily special.”

“The most popular item on the menu is the Halibut Parmesan, when it’s in season. But you can’t go wrong with the steamer clams, shrimp and grits or just a good old fashioned steak with shrimp,” Jen said.

Every year on Omar’s birthday, you can get a meatloaf plate for a dollar and the change that adds up to the number of years they’ve been open. (Let me translate: That’d be $1.72 this year, and you’ll never taste better meatloaf.)

And as much as the food, booze is the ticket—appropriately so, as noir is nothing without a double shot.

Reportedly, Omar’s was the first place in Ashland to get a liquor license. When you visit them, make sure to spend some time in the bar, looking at the picture history hanging on the wall. If Bear (I think his real name is Brian) is tending bar, he might offer you a free drink if you can pick him out of the winning team football photo—but you only get one guess.

SOU Profs and local authors who appreciate the cracked red leather hue mingle with die-hard locals who are happy to linger in the ambiance of Omar’s welcoming familiarity. Author and educator Robert Arellano orders “Robbie’s Ginger Whisky,” from the bar, and I expect to see Philip Marlow, Raymond Chandler’s greatest character, sidle up next to him and order a dry martini—straight up—three olives. Arellano once told me: “Everyone needs a restaurant like Omar’s, a place that knows you and welcomes you when you need to eat or need to rest; a place where the filters are off.”

In this brave new millennium, it’s fitting that Omar’s finally has a woman running things.  Jen Sink bought the place six years ago and is now the head of the family, the first woman and the first sole proprietor. She told me that she believes “there’s a kind of security in some things that don’t change.”

Hemingway said it best in a Moveable Feast: “If you are lucky enough to have lived in Paris as a young man, then wherever you go for the rest of your life, it stays with you, for Paris is a movable feast.” The same could be said of Omar’s. It stays with you, a movable feast, a memoir of Ashland’s history without filters, punctuated by initials carved into the bar and the faint outline of that dolled up dame, tracing Omar’s name onto the night sky.